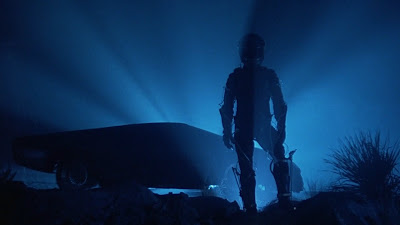 The opening scene, set against a gloomy night sky, is like an overture of cartoonish absurdity. As the music pulsates at a low throb, white lights are seen descending from the heavens and onto the desert road, where they zoom past the camera lens until they morph into the shell of the elusive Dodge M4S, which will become the object of affection for all the movie’s car-hungry antagonists. Behind the wheel, of course, is Jake Kesey (Sheen), sent back from the heavens to play the “Wraith,” a road vigilante that must exact vengeance on all those cutthroat hot rod crooks who murdered him after he was found making love to Kari (Sherilyn Fenn), the would-be girlfriend of the local car gang’s jealous leader Packard (Nick Cassavetes). Still following along? Good. The gimmick is that when Jake is away from his car, he must appear as a new town local, passing quiet time at a watering hole and engaging with his peers at a roadside burger shack, where all the key players seem to either gather or work. None of them, of course, know his identity, both from his previous life and from his mysterious alter ego. This becomes a frame of reference for audiences who may suspect added dramatic tension later in the film, when it is entirely possible that Packard or the misfits in his entourage might stumble upon the truth of the man during one of many deadly encounters with his elusive car.

Their villainous pattern is not exactly intricate. Early on, a young couple go joyriding at night through the desert with their music blaring, where the gang corners them hold the girl passenger hostage and force her boyfriend, the driver, to bet the pink slip of his car in a single race. Inevitably, the gang has managed to outfit their own vehicles with all the right parts to guarantee their victories on the road, which makes them infallible to all the supporting players: they look on in spite and resentment but never come right out to challenge them. This may explain why poor Keri, the primary victim of Packard’s lustful abuse, is so adept at putting up with his cruelty. She sees no other alternative, especially with a man who simply refuses to hear any denial of his advances. Given the mysterious death of her last romantic interest, it would also be unwise of her to return the flirtatious advances of newcomer Jake, who seems to have no fear of Packard or his verbal threats. Her response is at odds with her feelings: is he wise to ignore the danger, or does he know something more than he lets on?

The gang members, many of them dimwitted, go down one-by-one in chases that seem more like supernatural traps than feasible contests. The setup is exactly the same in each: one of the gang members challenges the quiet figure, who gets into his car, keeps pace with the competitor and then is left behind when he disappears entirely, in a mad burst of speed that makes the DeLorean of “Back to the Future” seem sluggish. Seeing the need to catch the Wraith, the driver speeds up more and then runs right into the side of the Dodge, which has positioned itself as a roadblock and causes the other car to explode on impact. A strange phenomenon: when each of the victims is pulled from the burning wreckage, none of them have endured any burns to their body. Is this strategic to some broader implication the movie will eventually make, or just an elaborate gimmick to suggest the presence of otherworldly interference? The movie never really clarifies. All the same, it is enough to rouse the suspicious demeanor of Sherriff Loomis (Randy Quaid), who has sought an opportunity to dismantle the local car gang but now finds himself being outdone by the vengeful road warrior with an axe to grind.

No other person is more infuriated by that notion than Nick Cassavetes, son to the late (and great) John, who plays the movie’s villain. Setting his sights on the dubious achievement of delivering menacing gazes atop overzealous (and cheesy) dialogue, he becomes almost delightfully campy in his portrayal. That may explain the magnetism of both the audience and of his victims, particularly poor Keri, who is good at keeping his advances at a distance while being unable to entirely tear herself away from his leering grasp. Some part of us collectively knows he is destined for failure – an ambitious and hopefully dramatic one. Cassavetes does not disappoint, often moving through the scenes with ostentatious flair and ridiculous masochism. Consider a scene where he attempts to “prove” his love to Keri by, well, cutting his hand open while she is in the car and then licking the blood from the wound. Is there any character in serious art outside of Shakespeare that would do this in a movie and not expect to arouse howls of laughter?

The movie is the full sum of a plethora of ridiculous pieces. The actors, who probably have shown up for something more serious than what was possible, do their best to sell the material with misplaced sincerity. The character relationships develop only as far as they must, to serve the purpose of the exploits of the mysteries of the third act. The chase scenes are nothing special but develop a kind of charm for their dependability as devices for the plot’s movement. And though the revenge angle goes unexplained, we could just imagine what Marvin could have accomplished had he taken the time to dream up a full scenario for this premise: I see a prologue in which the murdered man bargains hilariously with otherworldly forces for the chance to return to Earth and seek his payback. Would that not have taken the momentum of the movie above its otherwise straightforward, however preposterous, trajectory? As it stands, “The Wraith” is simply enjoyable as an exercise in the futile nature of the idea. It does not achieve the same absurdist grandeur of, say, “Sky Bandits” or “Mannequin,” which are essentially live action cartoons. But it means well. And given what we know now of a film industry that loves to attach large budgets to vehicles that function on the same intellectual level, that will be more than enough for those in the mood for disposable nostalgia.