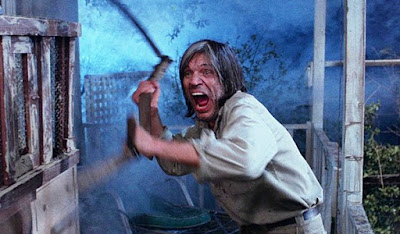 Yet on and on they pile up, like flying insects who thoughtlessly wander too close to an electric bug zapper. None of them die or struggle valiantly, either. They scream, plead, gaze on in disbelief, and sometimes even concede themselves as the blade of an oversize scythe makes impact with their delicate flesh. All the time, their killer looks on as if he is watching a floor show at Chuck E. Cheeses, exhibiting a gleeful stupor that allows him to be almost hilariously animated. Not a thought has gone into skill or modulation, of course, because all that violates the trajectory of the genre picture in the aftermath of “Chainsaw”; for a while, it was almost mandatory for the victims to submit to their fates without much struggle, lest that complicate matters and rouse the audience into thinking about alternative ways out. Yet to describe “Eaten Alive” in all its gory and simplified excess no longer does the experience justice. In this age when the bloody offenses of horror films have ceased following boundaries, all these descriptors are redundant. No, a film like this endures as entertainment because all the performances are pitched at that joyous trajectory of cartoonish excess.

You know the kind. Think of the likes of Sam Raimi’s “Evil Dead” or Scott Spiegel’s “Intruder,” which contain a delightful self-awareness that pigeonholed the grotesque visuals into a more lighthearted context, especially when the characters expressed their hysteria in almost comical ways. Perhaps some trace of that can be seen here, in a film that is probably more perceptive about itself than the more of the mainstream examples. It is rooted in glee, not in contempt. The giveaway comes early on during the first on-screen kill: an insecure call girl (Crystin Sinclaire) is exiled from a whorehouse and sent to fend for herself in the nearby foggy swamps, where she stumbles upon a building operated by Judd (Neville Brand), a so-called motel manager. He invites her to stay, proceeds to carry her bags upstairs, then completely turns the tables on her – there is an ambitious ambush that ends with her body being filleted by the spokes at the end of a garden rake. His entire demeanor is a compulsion of madness too strategic to be accepted as plausible. The laughs speak for themselves. While it is possible that those early moviegoers might have been inspired to loathing or fright by the display, of course, our more evolved psyches are able to look past ordinary blood splatters and see, perhaps for the first time, a nerve that is knee-deep in campy showmanship.

This trajectory continues even as the film seems like it might be turning towards more cruel methods. Soon after, a small family containing a young girl and her dog become lost in the wilderness and pull up to the motel during dusk, where the set’s lighting ascends to a harsh reddish hue. As they check in, the dog wanders too close to the nearby marsh and is eaten by the crocodile, inspiring a stay in an upstairs bedroom in which the mother must console her young child while her husband awkwardly mocks the situation by barking at them (is he cruel, or insane?). He is the next of Judd’s destined victims; the wife, meanwhile, will become a captive, and the young daughter attempts to flee before becoming trapped under the ground level of the building, where she spends the rest of the movie screaming hysterically as the man – or the crocodile – attempt to corner her and do away with her. Yes, this series of scenes belongs to that ever-so-deplorable trope about putting defenseless kids in harm’s way, but there is an air of gleeful hysteria that fills their emotions. A better question to ask ourselves: why take matter seriously and with scorn if everyone on screen is playing the material like illogical farce?

At the time of its release, alas, the scope of the material was put under far less intrusive lights. In the aftermath of “Last House on the Left” and “Texas Chainsaw,” horror films were regarded as literal beasts – frontal attacks on the senses with little in the way of alternative contexts or ulterior motives. That meant many of the more daring pictures of that phase were viewed more crudely than they are now, when irony and deception are the seeds in which modern horror auteurs plant their macabre gardens. Craven’s own “Last House” has decidedly experienced the most notable shift of consensus in this aftermath. So, too, do the likes of “When a Stranger Calls” and “The Burning” acquire eventual accolades as their ideas are taken into the consideration of younger and more open minds. On the other hand, does anyone who watches “I Spit on Your Grave Now” find any meaningful social framework buried beneath the depravity? Are they all that enthusiastic to discuss “The Hitcher,” still infamous for that sequence in which a woman’s body is torn in half by two vehicles moving in opposite directions?

“Eaten Alive” earns the former benefit. It is impossibly bad, sure, but its offenses are foraged out of the vivacity of eager filmmakers rather than the intentions of more mean-spirited provocateurs. The performances, furthermore, are an infectious blend of over-the-top enthusiasm and joy, while the more literal effects – namely, the overgrown crocodile – are comical in how they manage to achieve so little with so much effort. Coming off his own career-defining genre hit, Hooper’s approach is an admirable, if silly, departure. I have never exactly been the greatest fan of “The Texas Chainsaw Massacre,” which cheats on the concept of terror by subjecting its victims to an instrument of swift overkill. Judd’s method, while no less sadistic or crazy, is roused by something more endearing: the notion that every time he opens his mouth, the confused diatribes are destined to inspire a collective howl.