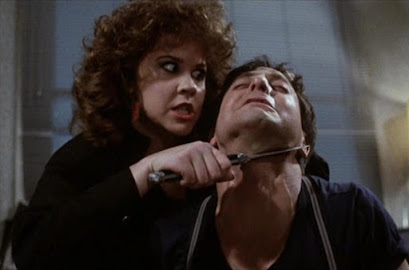 Good comedies are a dime a dozen. Mediocre ones ride a crowded wave occupied by the most consistent of underachievers: the same school of filmmakers that persist in the tired trend of momentary gross-outs, sight gags and juvenile humor associated with the human digestive system. Unintentional ones, on the other hand, are another commodity – they come from that place of mistaken values that is sometimes so vacuous of common sense, we are left with no other solution than to howl in protest. Consider “Savage Streets” as an example of this latter classification, and you begin to see beyond what can otherwise be surmised as a god-awful “Death Wish” rip-off. Not a single scene of the movie is modulated as if it were in sincerity. Characters speak to each other in vulgar soundbites that are detached from rhythms of the moment, seeming as if they are merely hurling graphic vulgarities at dead space for effect. And then there is a notable sequence in which two teenage competitors – one played by Linda Blair – engage in fisticuffs in the middle of the girl’s locker room while their naked classmates bounce up and down in enthusiasm. In any ordinary movie, these would be prime examples of sheer tonal absence. But then you take them into the context of a full running time that is chock-full of after-school-special melodrama, hammy acting, hackneyed back stories, implausible scenarios, overzealous cruelty, laughable sentiment and trashy and implausible violence, and you begin to suspect those involved have set out to make the most hilariously bad movie of its time.

Little of it is sincere or effective