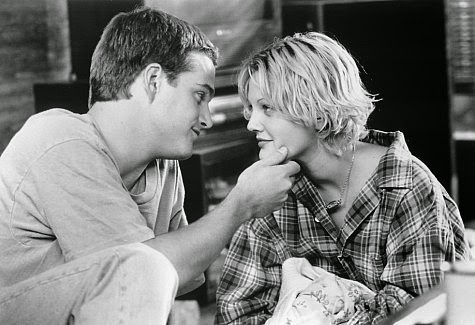 The most recent of these films, and arguably one of the best, is "City Of Angels," in which a guardian angel (Nicholas Cage) falls in love with a human being played by Meg Ryan. The movie shares many similarities with older romance pictures (the "two different worlds separates us" staple is still evident), but the climax is completely unorthodox, especially for a studio film. Even more unique is how it never manipulates its source material; the movie was based on a 1980s foreign film called "Wings Of Desire," which shares the same similarities but is more passionate about the subject and its players. It is better than "City Of Angels"; but at least the latter film keeps the spirit of the story alive through the translation.

"Mad Love" is, in a way, that kind of film; a unique tale of young romance where the characters are not squandered away by the fabricated gimmick that is shamelessly labeled a "love story." That doesn't mean, however, that the movie is completely without formula; aside from the final hour, much of the earlier half is spent on the same kind of romantic relationship checklist: the one that involves conflict, rebellion, sorrow, passion and all sorts of misgivings. For Drew Barrymore and Chris O'Donnell, two young but very talented stars, chemistry is hardly a problem; in fact, they go so well together on screen that, even when the picture retreads to formula, you could almost forgive it. But alas much of the repetition drags down the concept as a whole; it isn't as great as many might perceive, but with some nice surprises and unconventional plot devices, it manages to be quite passable nonetheless.

In the story, Barrymore's character, Casey Roberts, is having severe problems with family life. She's the new girl in a Seattle suburb, transferred from Chicago and rebellious in all the routine ways. When her classmate, the seriously school-devoted Matt, introduces himself to her, there is an instant build of chemistry. Before long, and before we even realize that the two have dysfunctional lives, they fall madly in love with each other.

The hook: Casey, free to do whatever she wants, turns out to be manic-depressive, and is a danger to herself. Of course Matt does not realize that, even when she is instituted by her own parents. As a result, he helps her make a quick escape, and before long both hit the road. Only later, when Matt realizes what he is dealing with, is there a sacrifice made and the plot realizes that a storybook ending is not the best solution for this young couple. The approach is like someone throwing a curve ball; you expect it to be fast and swift, but the slight turn comes off as a surprise at the last minute.

With all that is taken into consideration, "Mad Love" is pretty routine stuff with a few moderate turns. Whereas the lovers themselves are portrayed with lasting admiration, however, the minor roles are written with transparency and lackluster focus. We feel that the two most important players should be Casey's parents, but they are given so little screen time that there is no chance to see them develop. Other exclusions: Matt's family, which has suffered by the loss of the mother, but is completely forgotten when both Matt and Casey drop their lives and flee the scenario. Where's the compassion for family?

But the movie doesn't over-dramatize the relationship, and we remain patient while the plot makes its definitive decision as to what finale is needed to appropriately wrap things up. As I was watching "Mad Love" and contemplating its failures and successes, it suddenly dawned on me that, even with the repetition of love story, there can be much to like about these movies as long as they are willing to go an extra mile and at least incorporate something novel in the substance. This is a movie in which love faces the same conflicts and tribulations as other scripts, but doesn't surrender to a teary-eyed, feel-good studio ending.