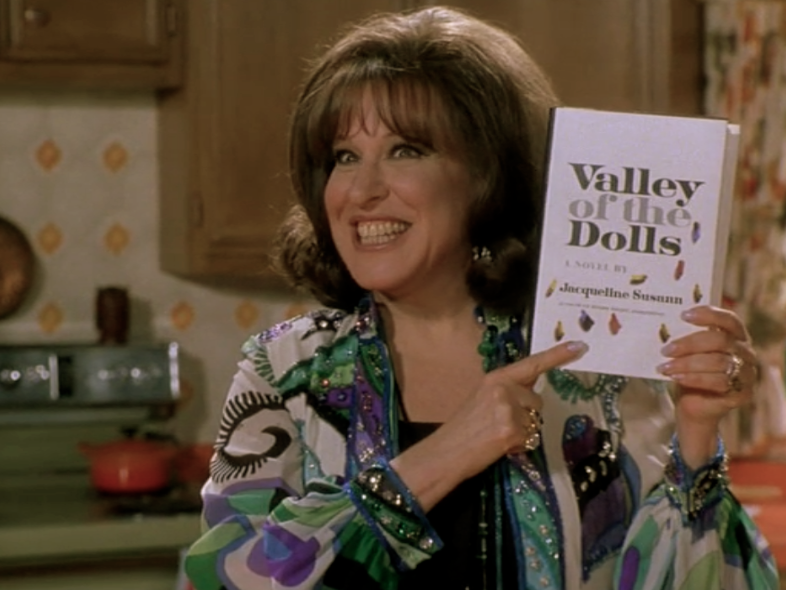 "Valley Of The Dolls" broke down the barriers of all those sex/drug restrictions implemented by modern art forms (such as the movies) by challenging the way we foresaw the celebrities of Hollywood. Such a new challenge has now been forced onto the cinema--is it possible, in any way, to create a film that can successfully interpret the life of this world-famous novelist? Can any star or any filmmaker possibly understand the mind of Susann, and if so, will we be able to believe it?

Of course it's possible; that doesn't mean, however, that "Isn't She Great" lives up to that potential. Movies about famous people, even if they are made up, can be brilliant as long as the writers keep the treatment at a precise interpretation. A movie about Jacqueline Susann would, presumably, shape a foundation built upon revealing moments, utter shock, vulgarity and tastelessness (this is what everyone comes to expect from such a persona). But this movie isn't nearly as brave enough, and tends to close the passages before we're able to cross through their entrances. All becomes even more unstable when the supporting characters, more colorful than the main, fall victim to the same fate. Talk about a rip-off.

The film stars Bette Midler as the trashy novelist herself, and perhaps that's the start of the problem. Midler has exceptional talent, great screen presence and an uncanny ability to become her characters; yet portraying Susann, an understood icon, is not in her best interest. The actress of such good movies as "The Rose" and "Ruthless People" wanders through the movie aimless and confused, without a clue as how to approach the character she is portraying. Actors should understand their roles and not try to interpret them in ways opposite of their original significance. Unfortunately, here is a woman of raw talent trying to identify with someone who had very little forte; the task becomes frustrating for her, and we lose general interest for the duration of the picture.

In some similar roles are supporting actors David Hyde Pierce, Nathan Lane, Stockard Channing and John Cleese. The movie follows them around as if they are only puppets in Susann's web of deceit, shallowness and vulgarity (how unfortunate that is, especially with such great talent attached to the minor roles). The movie opens (I guess), in the 1950s, in which our main character is a hopeless actress trying to make it big, somewhere, in the entertainment business (but walk-ons are hardly a big break for a star). She meets Irving Mansfield, a fetching but whimsical gentleman who, as the future decides, will be her husband--and her agent. Susann was apparently the kind of person who succeeded at being a rather delectable public persona, and failed at every entertainment field she tried to work in--to the movie's minor credit, it manages to preserve that factor.

How the idea of the book is brought up, and what exactly inspires it, are details a bit sketchy in my head at this point; some of the material bored me to death, and caused a brief period of incoherence on my part. What sticks in memory, at least, is the reaction to the book from her circle of friends (one person comments "it's like 'Gone With The Wind,' only trashier" and another says it has the makings of "a really cool children's book"). A publisher immediately jumps on the opportunity to market it, but Susann herself has to get past her oddly irritating editor (Pierce), who enjoys shaving off passages of the book to tone down its revealing subject matter.

Of course no one expects us to truly understand Susann, even with a successful story of her life. But the problem here is that there really isn't any attempt to stand up to that challenge--the director seems to be more interested in the boring details, dissecting them at such an endless rate that no one could salvage any type of biographical importance. By the time the gimmicks have been unleashed and the ending draws nearer, we have become so outraged at the neglected screenplay that, once the saddened resolution finally arrives, any tears shed are from our frustration, and not from the sorrow we should be absorbing from the film.

In brief, "Isn't She Great" fails in almost every aspect to capture an attitude, and never even tries to be as raunchy (or fun) as Susann's novel itself. Jackie would be very displeased.