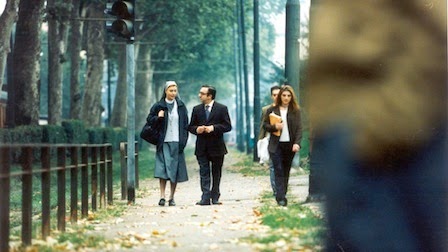 Now comes his latest, a touching little film called "Not Of This World" that presents conflict and self-discovery for characters who don't quite realize their lives are heading in ominous directions. All sounds a bit complicated, but this is really a simple, well-crafted film that doesn't demand much from the audience other than to just show up. In the process of absorbing the images and getting to know the characters, a sense of renewal fills the air; it's the kind of substance that Ingmar Bergman had been so attracted to during his life as a prominent filmmaker.

The story revolves around three different characters, all multidimensional and yet never completely over-characterized. The first is Caterina, a nun who is just eleven months away from taking her final vows in devotion to God. One day in the park, she is handed an infant by a passing jogger (who claims to have found it in the bushes nearby); wrapped in a sweater, she takes the child to a nearby hospital, contemplating who, or what, could have possibly abandoned this innocent being, and at only 5 days of age.

The sweater is her only clue in her determination for finding answers. It leads her, eventually, to the laundromat of a withdrawn individual named Ernesto (Silvio Orlando). He soon realizes that the child may be his (it was wrapped up in his sweater, after all), and decides to help Caterina in her quest to locate the mother. But the search for the infant's biological parent is not the only quest these characters embark on.

In ways, the heart of the plot is the child itself, provoking a complex character study as these people are confronted with an overwhelming problem that begins to challenge their very beliefs. Caterina's devotion to the church, for instance, may not exactly be what she is looking for in life. After she bonds with the child, her belief system becomes skeptic; is it necessary to make finish the eleven months, or does she simply give in to her other feelings? A calm relationship between she and Ernesto develops as a result of their working together; meanwhile, the mother Teresa (Carolina Freschi), struggles to find stability after reluctantly giving up her child for fear that she would be unable to provide for it.

But all of this is approached with subtle realization; it's as if Piccioni doesn't want us to notice any of the changes in the characters until after they have happened. We realize where some things are headed (it's seems almost transparent when Ernesto begins to bond with Caterina after devoting his life to his work), and yet are thankful that certain resolutions are not contrived or predictable as most of the sentimental formulas in Hollywood. The director is never distanced by his material, and remains compassionate towards his characters, avoiding stereotypes and judgments even when certain people have apparently made the wrong decisions.

The material is touchy on the basis of its Catholic involvement, but don't expect any outpouring of protests from the Church anytime soon--the movie is opening in the nation on very few screens. But those who have the benefit of being near them should jump at the chance to see the movie; it's simple, touching material that keeps you involved and yet never requires too much thought to seem heartfelt. Piccioni has already made his classics ("Ask For The Moon" and "Condemned To Wed"); "Not Of This World" may be the definitive proof to the United States that we're dealing with one of the strongest foreign directors of our time.