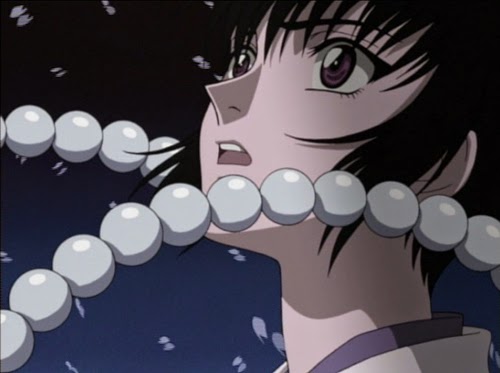 To an effect, this is how many apocalyptic pictures are handled, and understandably so. The word itself refers to the end of the world--something that everyone wishes would never happen. Yet characters in movies, and the audience itself, are always skeptical of the turnout; we can either perish as the result of some astronomical event, or conquer it using our skills and determinations. Some movies ("Deep Impact," for instance) depict the survival of humanity using the strong wills of those in pursuit of making a difference; others, like "Terminator 2: Judgment Day," perceive the possibility that the apocalyptic future may be something that cannot be changed.

Allow yourself to absorb the above information before you plan on seeing the Japanese Anima hit "X," a new title to arrive here in the states. After experiencing great success over in Japan four years ago, Manga Video, the lead distributor in Anima films, is bringing it to the states for a brief theatrical run, and then an extensive video release this spring. It will be one of the few Anime films in history to be seen in US theaters--another, a lavish production titled “Princess Mononoke,” was released last fall.

I've never been a big fan of Anime; in fact, before "Princess Mononoke," the only endeavor that was ever able to capture my attention was the wildly sophisticated "Akira." But "X" is completely out of this world--beautiful, smart, inventive, stylistic and all-around fun. Japanese animation has always been a little eccentric compared to that of American, but here is something that excels in bizarre circumstances and comes off an exciting, intense adventure. It is treated with such careful craftsmanship that, even with the odd story, everything manages to make sense.

The story takes us through a shadow of despair and betrayal, as two opposing forces threaten the very existence of humanity and nature. Legend foretells of a violent war between the dragons of Heaven and Earth, one in which the planet's future may be catastrophic without the opposition from a liberator. The dragons of Earth destine to destroy the human race so that nature can be reborn; those of Heaven choose to protect the humans from any kind of apocalypse. At the center of these opposing influences is a human named Kamui, who returns to his home of Tokyo after having a dream in which his deceased mother alerts him to his importance of this war. It is said that he holds the very fate of humanity in his hands (the name "Kamui" itself means something prophetic), and he is instructed to seek out the dragons of heaven and join forces with them to protect Earth's peoples.

Each dragon comes in the form of, at first, a human being boasting special power shields and a wide variety of supernatural abilities. As each side fights to the death and the numbers of the dragons are decreased (there are seven to begin with for each team), we meet the sources of these attacks--two psychic sisters who travel through the dreams of humans searching for the "chosen one." Each predicts a separate future for Earth, but our faith lies in she who desires to save humanity, an elaborate princess-like figure with red eyes and white hair that drapes over her bright costume. The other sister, a gloomy enchantress etched in dark shadows, serves as the film's antagonist, although maybe not intentionally.

These features, including the perception of Kamui as a liberator for the human race, echo similarities to "The Matrix," if only to help reinforce the fantasy angle instead of inspiring a science fiction twist. A close friend argued my final judgment of the premise, though, claiming that science fiction and fantasy are essentially the same thing. I beg to differ--the first can have possible existence in reality; fantasy is merely something that can only dwell on paper or in the mind. The same case here: "The Matrix" uses computers, a real creation, to threaten humanity. "X" relies on spiritual, and often legendary, beings to decide the fate of mankind.

Kamui is preordained to help the Heaven dragons, but that doesn't stop Earth's power shields. The enchantress of the Earth seeks out Kamui's best friend, Fuma, to be his opposing influence, and since we are told that he who is chosen to defend Earth's dragons is stripped of all compassion, Kamui himself realizes that there will be no convincing his friend of a peace, and they must fight for the sake of all that lives. This pitch forces on us a skepticism last seen in "Play It To The Bone"--how can two lifelong friends fight each other to the end, or in this case, death? But the movie doesn't entail a traditional studio ending in which both characters stop the fight and join hands for a chorus of "We Shall Overcome." We are given a climax so surprising, so unforeseen and so incredibly daring, that it compares to the magnificent twist recently seen in Paul Thomas Anderson's "Magnolia."

Each scene is given an array of detail, from rippling water effects to symbolic floating blossom petals, and even to the beauty of Tokyo itself (which looks almost real in a few brief shots). Adding to the beauty of the concept are the dragons, whose powers are displayed with sharp edges and fast-paced projectiles, hinting that inspiration may be drawn from comic books; and the characters themselves, while not particularly distinguished, generate our interest during some of the slow scenes. But most importantly, the story is completely engrossing; the audience is never given advanced notice of certain outcomes, and they only become revealed just as the characters are making the discoveries. Now, with the increase in demand for Japanese animation here in the states, it is possible for "X" to experience the monumental success that other great Anime features like "Princess Mononoke" have already achieved.