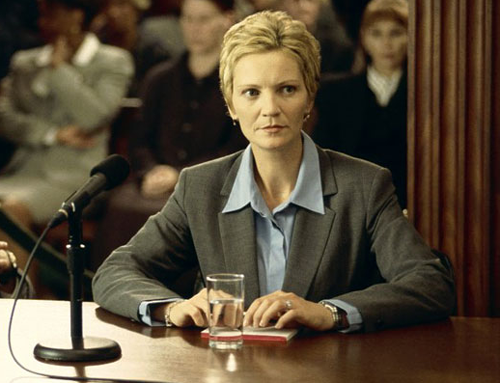 The term "dirty politics" is viewed under a loose definition because of the several ways it can be practiced in government, but Rod Lurie's "The Contender" casts an argument that is not only the most familiar, but perhaps also the most serious and defaming. Reflect back on the scandal that put President Bill Clinton in hot water with Congress: indeed it seems that the ideal approach in discrediting any politician's reputation is to go searching for some dirt of a sexual nature. What most utilizers of dirty politics do not always realize, however, is that leaking such information on someone's past may actually improve an image rather than tarnish it, simply because the general public accepts the fact that politicians are humans themselves, and in some cases should not always be held up to higher moral standards than those of any regular US citizen. Imagine Kenneth Starr's reaction, for instance, when the details of the Clinton sex scandal became public knowledge, and the president's approval rating skyrocketed as a result.

Trotting on that line of reasoning, "The Contender" opens on a note of confidence that never lets down, even when the situation seems to be irreversible. The nation is under close watch of the current administration after their current vice president dies, and the commander-in-chief, President Jackson Evans (Jeff Bridges) goes in search of a new candidate to fill the void. His search at first leads to the "rising star" of the democratic party, Virginia Governor Jack Hathaway (William L. Petersen), who recently made a heroic gesture when he jumped into a river to save the passenger of a motor vehicle that had drove off a bridge and into the deep waters. Even though the driver never survived the incident, Hathaway's approval rating went through the roof, encouraging a consideration of appointment to this prestigious executive office. Unfortunately, Evans' administration, afraid of the idea that they would seemingly be succumbing to sympathy rather than merit, terminates the possibility and instead opts for the next best thing they can find.

The movie's biggest anchor is the performance by Joan Allen, whose calm but brisk screen presence provides the fascinating screenplay with a dynamic sense of tension, as we watch and wait for Senator Hanson to acknowledge the leaked reports of her past sexual behavior. But throughout the ordeal, even during a televised session in which a committee of legislators badger her over the reports and other issues, she is able to hold back any and all temptation to shoot the exaggerated remarks down. And why shouldn't she? Silence is not only deafening, but necessary in keeping the focus on the issues and off of the irrelevant scandal. Allen's performance is undoubtedly worthy of Oscar consideration (especially since she was unfairly ignored two years ago for her standout supporting role in "Pleasantville").

The script, likewise, is a flawless endeavor that educates, intrigues and entertains all at the same time, in which layers upon layers of details are slowly peeled away in order to keep the viewer guessing and contemplating the outcome. And what's more, the characters here are supplied with a brilliant sense of awareness among one another, often relaying lines of dialogue that leave shameless grins on our faces (the senator's 6-year-old son, at one memorable point, offers some logical reasoning as to why the office of vice president is so much better to hold than that of the president itself). And as the parley makes a significant impact on the atmosphere of it all, so does the clear and concise cinematography, which moves through rooms and around people like just any other person trying to get to the bottom of this political mess.

Ultimately, what one is left with by the end of "The Contender" is the image of how even the greatest and most powerful political figures have flawed histories behind them, and how we must learn to accept them in the end as imperfect human beings like all of us common folk. The result is also one of the most well acted and written movies of the year.