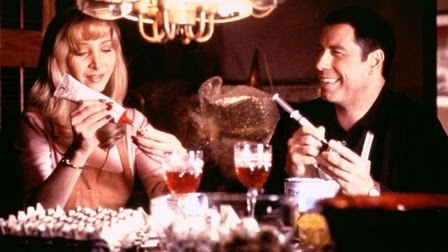 "Lucky Numbers" is like a TV game show without the consolation prize; a movie with a strong premise nailed down firmly, but no decent characters, inspiration, mild humor or even stable plot structure to top off the package. Is there too much to expect here first off considering the fact that John Travolta, the film's star, is just coming off his brief recession from "Battlefield Earth"? Not really. But low expectations don't mean we should just throw out even the most simple standards here, do they?

The movie is one of those snowball crime capers, in which every event that follows a decision builds upon the previous fallacy with a whole new one. Travolta plays Russ Richards, a Harrisburg, Pennsylvania weatherman, who lives in one of those residential neighborhoods where everyone knows everyone else, and local celebrities are recognized by having breakfast dishes named after them at restaurants. Richards is as popular as local celebrities come—every other person who acknowledges his presence either wants a job or an autograph. But there's little to celebrate on his behalf, however, as the man's local business, a Snowmobile dealership, is slumping in sales because of a lack of snowfall.

Because of a refusal from the television executive (Ed O'Neill) to hand out loans, Russ begins having trouble with finances. He pairs with his good friend Gig (Tim Roth), a local strip club owner, to formulate plans on screwing the government out of some spare money. When the scam doesn't go over well, Russ opts for the next best thing: rigging the lottery. To do this, assistance from Crystal (Lisa Kudrow), the "lottery ball girl," and her southern cousin, Walter (Michael Moore), is needed to pull off the dirty trick. Unfortunately, other residents in town catch wind of the deed, and soon everyone wants a share of the winnings.

This is a lot like "Waking Ned Devine," only with more noticeable actors and an even clumsier story. Using formulas to a meticulous advantage, the script by Adam Resnick is saddled with an indistinctive tone, shifting from black comedy to human drama so often that we practically feel like we're watching two bad movies at once. To start with, the humor just isn't that inspired or ambitious; it is flashed on screen and then completely forgotten by the audience, who, at least in my case, sat on in dead silence for all 105 minutes. The premise itself at least provokes a certain amount of intrigue, but good setups don't always lead to great payoffs.

The acting is nothing to applaud either, as characters talk, interact and execute plans with such little intellect or conviction that, even with the smallest morsel of worthy humor, few viewers could enjoy. Travolta will probably do no worse than that would-be space epic disaster from earlier this year, but in "Lucky Numbers," he's confined to similar disgrace, playing a character so dumb, so incompetent and so unlikable that it's odd how the director, Nora Ephron, even thinks of him as a good guy. Ditto to Lisa Kudrow, who had reasonable success as a ditzy sister-in-law in "The Opposite Of Sex," but is basically repeating her "Friends" persona this time around, only with a more skimpy wardrobe. Ed O'Neill as one of the two men in Crystal's life (Russ being the other) seems to forever be trapped in dismal supporting roles, and Tim Roth, who was also alongside Travolta in "Pulp Fiction," looks uncomfortable in almost every scene. The only credible acting here goes to Michael Moore as Crystal's bizarre relative, who has a few reasonably admirable moments thrown into the mix to at least keep us from walking out of the theater in utter shame.

I admire Nora Ephron, if mostly for her ability to weave ordinary characters into quirky narratives that give them something exciting to do ("When Harry Met Sally..." is such a success story). This time, she's beating to a totally different drummer; one who very much pales in comparison to the last. "Lucky Numbers" is a distraction at best from the oncoming load of promising holiday films, but one that even fans of the ensemble cast and the director will have difficulty in defending.