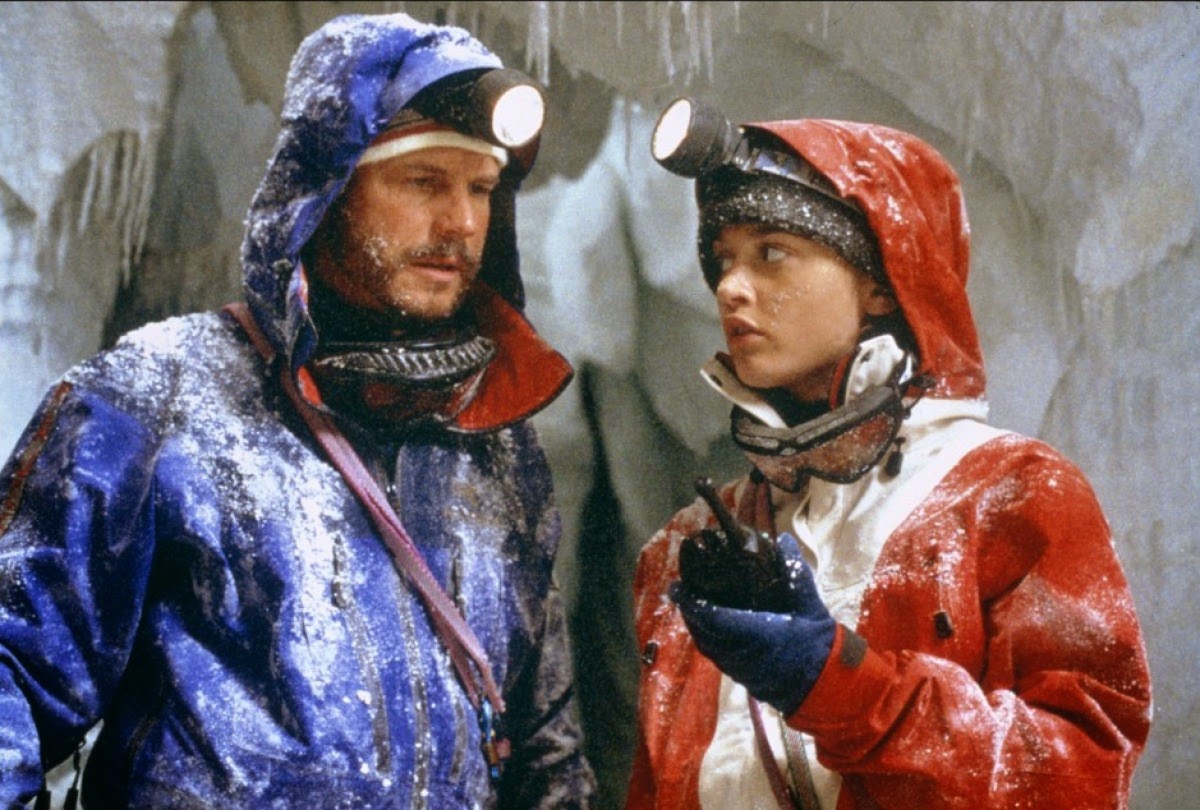 The art of rock climbing is one of the most demanding and treacherous undertakings available to us as adventurers, in which every obstacle, every sound and every movement is an innuendo to a clouded outcome. Even the world's most experienced mountain daredevils are at high risk of losing their lives; every year, countless rock climbers tread the slopes of steep mountains with treacherous inclines, and never live long enough to tell of their nail-biting experiences. And yet why do we, year after year, continue to scale the world's great rock giants like Mt. Everest, taking the risk of putting a halt to our own existence? The challenge of something that is seemingly hopeless to conquer fills us with the adrenaline and audacity of a large fantasy warrior who keeps swinging his sword, but may never have the power to ultimately take down the dragon.

"Vertical Limit," the newest from Martin Campbell (also known for the brilliant swashbuckling adventure "The Mask Of Zorro"), is a movie made for that breed of audience, a tense and foreboding endeavor that combines skill, danger, surprise and catastrophe in one of the most effective ways I've seen lately. Much more watchable than the disappointment of "The Perfect Storm" from this last summer, the picture does what few in its position might have done: gazes down at the world from ferocious heights, fearless of the impending dangers that surround and consume its characters. If only we could say the same words for the audience members, who will no doubt be left deadlocked by the sight of large cliff sides looking down to valleys miles below. Words to the weary: if you are afraid of heights, prepare to face a challenge.

An opening scene featuring the death of a father of two hanging siblings immediately establishes that tone (don't mind the fact that it echoes the opening shot of "Cliffhanger," though). The two in discussion are Peter Garrett (Chris O'Donnell) and Annie (Robin Tunney), brother and sister who have gone their own separate ways after the day they saw their dad drop to his death on a mountain climb in Utah. Peter, however, is forced to face his demons when his sister Annie is buried high on the slopes of the Himalayan mountain K-2 because of an avalanche, along with a millionaire and a tour guide by her side. The situation gives the trapped individuals 48 hours before the conditions take their lives, and with only less than half of those hours to go, Peter puts together an assemblage of climbers at the base of the mountain to help him go up and retrieve the three individuals before nature claims their lives.

If the brisk landscapes look as realistic as possible to you, that's because they are. Filmed mostly on location at Mt. Cook in the beautiful New Zealand rather than entirely on sets, the movie attains a vivid, hard-edged atmosphere that propels the viewer onto the screen and directly into the frigid and risky situations. We can imagine the difficulty for the technicians and actors themselves, who, as reports claim, are often suspended by cables high above the mountain base in order to carry out the duty of making the film look and feel as authentic as possible. But in ways this is the most necessary approach, not only because it forces onset individuals to face their own fears, but also because it preserves the sense of realism for the audiences. Filming on a set in which actors would only have to stare at blue screens would likely lead to overblown stunt work and undermine the reality of the situation.

Side saddling the thrilling action sequences, however, is a story that is more routine and obvious than one will hope for. Acting more like a checklist of clichés than an exhibition of complete creativity, the movie shamelessly rips off ideas, formulas and even specific twists for its own personal agenda. This can be distracting to those in search of an intriguing plot, because while they're busy weighing all the similarities to movies with parallel base themes, the visual fanfare is likely being ignored, and perhaps at some very crucial moments of the movie. Many of us have begun to accept the fact that disaster pictures will probably never give us the full unconventional package, but until the day that filmmakers at least attempt one, movies like "Vertical Limit" will probably always fall under the scope of style outranking substance.

In the end, however, this one has something over most of the recent nature-as-the-enemy features: it is neither boring nor uninteresting. Those are big pluses, which give the production an unmatched nerve to stare off onto deadly landscapes as if they were stairways to heaven. The movie is beautifully photographed and executed, and even if the plot doesn't do the exteriors justice, at least the texture and ambition help hide away most of the formulaic interior structure.