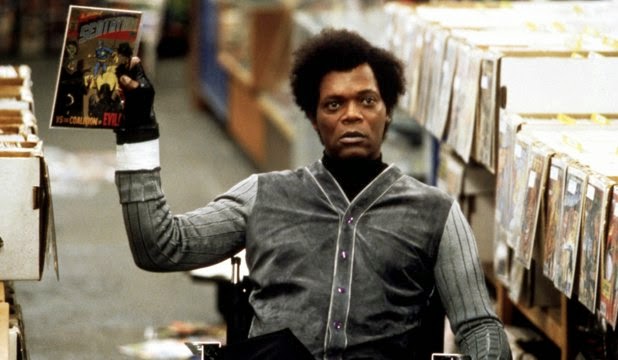 There is perhaps nothing more pathetic than a movie that supersedes great expression with great contrivance, and M. Night Shyamalan's new thriller "Unbreakable" operates under such reasoning. When dealing with subject matter that borders between realistic and far-fetched, it's not a matter of how the story is set up or what the subject matter deals with: it's all in how you allow it to unfold which ultimately decides the merit. A movie that I am instantly reminded of, "Being John Malkovich," operates on a plain of existence where the inarguable absurdity is effective because of the influence of brilliant satire, strong details, and smart but wicked characterizations. "Unbreakable," like a cinematic opposite, is a long and odd marriage of fantasy and realism, but one that lacks substantial pace, decent characters, thrills, clarity, shape, and its own inspiration too often to ever be taken seriously.

The movie is almost like "Frequency," only with more lunacy and less intrigue. The story deals with David Dunn (Bruce Willis), a security guard from Philadelphia who practically sleepwalks through everyday life, the reasons stemming from his marital problems and lack of enthusiasm for life in general. At the beginning of the picture, a large train wreck kills every passenger on board, except for David himself, who emerges from the accident not just alive, but without a single scratch on him.

Beguiled by his survival, David meets up with the mysterious but sophisticated Elijah Price (Samuel L. Jackson), a man with a rare bone disease who has a passion for comic books. His presumption is that super heroes actually dwell in our own plane of existence, only no one realizes so because the people themselves are not ever aware of their extraordinary capabilities. Elijah, probing David with all the essential questions (did he ever remember getting sick, having broken bones, etc.), makes the distinction that the security guard himself may be one of these real-life super humans he has projected in his theories. That, at bare minimum would certainly explain his apparent success in cheating death. But the actors, Willis and Jackson in particular, wander through the material like lost souls without knowledge of the circumstances that have brought them together. The plot's heavy-handed detail doesn't do much to relieve the strain, either.

The director, Shyamalan, is more famously known for last year's hit "The Sixth Sense," but anyone who sees his latest endeavor will easily be able to pick up on that detail. The catch is, this new film is practically a clone of its predecessor, with similar structure, character organization, and thematic elements woven into the material as if he had no other options at his disposal. That may have been the first problem, as the predecessor, in the views of a selected group of individuals such as myself, is also one of the most overrated ghost stories ever made. In combining the two movies, a general checklist begins to take shape; both pictures have: (1) a tense opening climax setting the tone for the further plot implications; (2) the slow erosion of the main characters' family relationships; (3) the horror in accepting that you might have an extraordinary gift; and (4) being redeemed all in the end by the wise words of a child. I assume there are more similarities between the two at hand, but trying to distinguish them all would be a long and tiresome task.

Anyone can cloak an old cliché or formula like these with a strong sense of style, though, and Shyamalan, at least, knows the touch of any good director of modern thrillers. His style is flawless and effectively executed, with a saturation of monotonous, foreboding tones, and cinematography that stalks its players with little mercy or hesitation. Does the visual success distract attention from the story's shortcomings, though? Not always, which undermines not just the whole product, but our perception of it as well.

Ultimately, it's the writing process that throws Shyamalan off his course; like the last movie, the screenplay that is used in "Unbreakable" is framed out of characters and twists that feel more like leftovers from better films, the only significant difference being that the Oscar-nominated 1999 picture at least had a solid resolution, (unlike this one, which is clearly unsure as to what kind of ending is necessary in putting and end to the plot). The fact that the movie has an ending at all is, I guess, enough of a consolation to keep us quiet—that is, at least until another film with him as the writer gets green-lighted.

This is a very discouraging film, if not for those who are bewildered by the overwhelming positive reaction behind it, then for those who have repeatedly tried, even if it takes lowering personal standards, to find enough redeemable qualities among the flaws to deem the final result as at least a recommendable product. An attempt to dissect every little detail here, needless to say, only leads to a more unfavorable outcome; the deeper you go, the more "Unbreakable" begins to seem like a labored, shallow exercise in cheap thrills that is more interested in playing with the audience's mind than uncovering a decent, thought-provoking narrative.