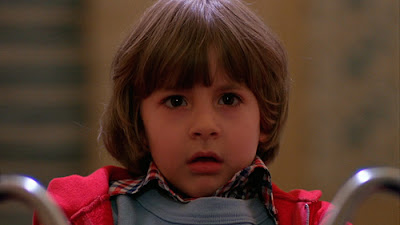 Sequence: Around an hour and a half into the film; approximately 2 minutes and 20 seconds long; 8 total shots

Shot 1: Wendy Torrance (Shelley Duvall) paces back and forth alone in her hotel room at the Overlook, a room that is lit slightly in the corners by floor lamps and is distinctive because of its light orange walls. Wendy is at first framed by the french doorways behind her, and we see the harsh light of the hallway beyond that, dividing the rooms. Wendy has a cigarette in her right hand and doesn’t change any postural position throughout her pacing. As she begins the pace, the camera follows her; as it does, it reveals all the other areas of the room she’s in: the television, the windows, the low-seated chairs, the bed, and even the bathroom doorway, which looks into a room full of shadows. While she paces, she begins muttering to herself about how she’s going to get her son out of the hotel and to a doctor, a scenario established earlier on in the film. Wendy’s ramblings are accompanied, aside from tears streaming down her face, by unsettling background music that features the sound of a beating heart among its ambient tone. The music intensifies as her pacing becomes repetitive and her ramblings even more sensational. But never once does the camera fail to make her the center activity. The pattern is then broken when the word REDRUM is uttered from a voice off camera. For the first time, her facial expression changes from being very saddened to extremely alarmed. She follows the repeating voice (uttering the same word in a kid-like but foreboding tone) to the room across the hall, where she rushes to it and opens the door to see what the source is and what the reason for it is.

Shot 2: On the opposite side of the door in a dark room, Wendy throws it open to reveal the harsh hallway light entering through the doorway. It hits the back of her head, and as she creeps forward to the left side of the screen, her eyes focused downward on something, the light outlines the whole back of her body. She kneels and comes to rest on a bed, which is on the wall where the hallway light is hitting it. A child in red pajamas is propped up on the bed with his head focused downward, the light hitting only certain areas of his face to outline the bone structure. Wendy puts her hands on the top of his head and smooths his hair down to the sides of his face. Her expression has gone from terrified to relieved, and the boy’s focus, remaining unchanged, continues to result in the procclamation of REDRUM. She tries to quiet him with questions like “Did you have a bad dream.”

Shot 3: The boy’s face is now the direct center of the camera, the right side lit up by the hallway light while the left remains hidden in darkness. One of Wendy’s hands remains planted on the side of his face, and his serious expression remains unchanged. When she lifts it and asks him what’s wrong, he turns to her, revealing a few more features through the light, and utters in a raspy voice, “Danny’s not here Mrs. Torrance.”

Shot 4: The camera is now on Wendy, angled slightly different than in shot 2 (this allows Danny’s head to be viewed from the backside). Wendy’s expression is now one of worry, but her dialogue doesn’t emphasize that (“It’s okay Danny. Wake Up. You just had a bad dream.”).

Shot 5: Same angle as shot 3, the light on Danny’s face now a little harsher than before. His expression remains just as stoned as before, his eyes focused on his mother. Still he insists that he’s not Danny. (“He can’t wake up, Mrs. Torrance”).

Shot 6: Back on Wendy, the same angle as shot 4. Her worry is a little more apparent here, her body trembling slightly to suggest twinges of fear. Still, she insists that Danny wake up (“Right now, Danny.”).

Shot 7: Almost identical to Shot 5, the difference being a slight shaking provoked by Wendy, and a dialogue change (“Danny’s gone away, Mrs. Torrance.”)

Shot 8: Same angle as shot 6. Wendy now begins to break down at an undisclosed realization and embraces Danny with her arms. As she does, the hallway light briefly hits the camera lens, and then goes away when she and her son’s embrace comes back into the center of the frame. Fade into the next scene.

Analysis
The immediate difficulty with trying to analyze Kubrick material is that each sequence is equally important to itself as it is to the whole movie; some concepts overlap into the central theme while others are only meant to be thought of for a sequence or two before being completely abandoned. Something along those lines appear to be happening in this particular sequence of “The Shining,” which isn’t an obvious selection for most analysts, but definitely substantial enough to deserve the attention.

For starters, Kubrick’s actors are suited for this material because of their looks; Shelley Duvall looks weathered and distraught as Wendy Torrance, while Danny Lloyd has an innocent face that is easily transformed into something either foreboding or disturbing (and his voice is calm but suggestive as well). Kubrick sets up this sequence utilizing that particular quality; Duvall is saturated in physical angst as she paces back and forth from one area of the room to the next, never changing upper-body position unless it’s to take in a large breath. Her hair is messy, her face covered in tears and snot, her lips cracked and her clothes messed. She is the center of the scene clearly, while the background elements (lighting, setting, furniture, etc.) simply emphasize the seemingly ordinary conditions she’s up against in the Overlook Hotel.

The lighting is most effective because it’s at its brightest in the corners of the room; lighting like this is sometimes used to underscore a certain freedom within this wintry prison, which is all around her but never quite focused on her directly (in other words, she simply hasn’t found the right way out yet). The hallway lighting, meanwhile, signifies the separation of not only rooms, but roles; when Wendy ventures across the hall to her son’s room, she isn’t a hopeless rambler anymore; she’s a distraught mother. And of course, the lighting in the dark room helps further stress the unnerving setting, Danny being seen in two contrasts (light and dark) to emphasize his two alter egos, and Wendy being shown in very little light to further implement the notion that she is never able to “find the path,” so to speak (and the lack of light also strips away her facial defenses, leaving us with a raw sense of emotion when she is conveying her feelings to her son).

The musical score, meanwhile, offers a stark contrast to the hopeless sorrow provoked by the lighting elements. In fact, the sounds are sometimes so freakish and pulse-pounding that you expect something to jump onto the screen without warning. The sound of a beating heart increasing as Wendy’s ramblings become too sensational may be the segment’s biggest virtue; it not only accentuates the tense tone of the whole picture, but also enforces the notion that no single moment in the lives of these people can be seen as safe or uplifting. At that moment, the tension is as thick as it can get, even though Wendy is merely talking instead of participating in something dreadful.

A slight touch of foreshadowing is likely made, furthermore, by the fact that Danny is wearing red pajamas in this scene. Blood is utilized relentlessly in “The Shining,” not for the gore factor but simply as a visual element to keep the eye focused on other things. Because this sequence comes at a point when there’s no need for blood to be utilized, we gather that Danny’s pajamas serve as a stand-in for the bodily fluid, keeping the eye glued by use of a bright color amongst lots of darkness and ordinary pastels. Of course, this idea is tossed away when blood is necessary once again.

Impact
Kubrick’s approach doesn’t clearly come together in any one moment or shot, but the sequence chosen here does manage to cluster a few of his techniques into a coherent 2-minute result. Lighting, cinematography, casting, set design, score, dialogue and sound effects are each applied here, and though certain elements outweigh others, they do come together to offer some insight into the complex big picture, which is like watching a kaleidoscope of flesh clash against things that we can’t begin to comprehend.