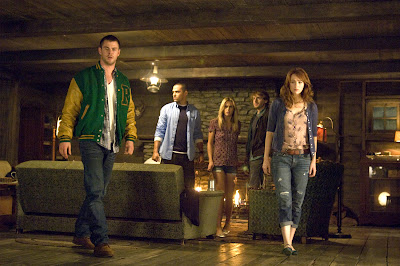 Here is a movie that takes brainless mechanics and forces them to play out in a wisely-planned premise. It is the antithesis of its own muddled genre. There is no second of the movie that isn’t ripe with intrigue, and the delivery is so well conceived that gratuity and shock become quickly neutralized by new ideas and comedic timing. I gasped, grinned, and even laughed. And I might have felt bad for doing so, if not for the fact that I, much like the core audience for films like these, have been desensitized by the torture often utilized in this generation’s slasher pictures. This is hardly a movie that would have worked twenty years ago; it’s skill and revelations are only made so powerful based on the fact that the filmmakers expect us to be tired of the formula, and understand how incessant the bloodshed has become. They require us to want the change as much as they want to execute it.

Allow me to explain. The movie opens with all the traditional trappings of a scary movie: five college-aged friends pile up into a van and go for a weekend excursion into the woods, at a remote cabin that looks as if it was transplanted from the set of “Evil Dead.” There is sexual tension between two of the characters. One is a smart ass, another is a loving girlfriend who just smiles off all the sarcastic remarks of her buff boyfriend. And the fifth is a pothead whose habits may actually benefit him in the chaos that will inevitably ensue. Everything is going fine until the cabin’s basement reveals foreboding clues to a potential misfortune. The gimmick here is that each item discovered in the basement tells its own story; they are basically triggering mechanisms, set up in such a way that whichever is chosen by the five will unleash its own series of events against the doomed group.

How is that even possible, you ask? Here’s where it gets clever. Simultaneous to the movie giving us glimpses into these kids’ brewing plight, it also cuts back to an underground laboratory setting, in which two sarcastic guys named Sitterson (Richard Jenkins) and Hadley (Bradley Whitford), dressed like lazy government workers, monitor video screens and turn levers. Their purpose: they appear to be puppet masters in some kind of grand human experiment, and their rat maze is that cabin at which the kids will ultimately be tested by gruesome circumstances set in motion by basement trinkets. What they fail to realize at the time is perhaps the most obvious to audiences: in a row of brainless ducks meant to be hacked to death, one duck will inevitably be smart enough to get to the bottom of the source, even if the source was always a transparent one. This inspires enough of a weak thread in the story’s fabric to cause major chaos at both the cabin as well as the laboratory, and the excursion becomes one of endless amusement.

And yet that’s not where the ingenuity ends. Director Drew Goddard, best known for his writing work for “Lost” and the handheld monster movie “Cloverfield,” works overtime with his co-writer Joss Whedon in developing a screenplay that is cheerful in the way it overlaps shocks and twists with an underlying sense of conspiracy. Even when we feel we know all there is to know about the story, there is another level of surprises waiting to be revealed. So, too, is his direction well-paced, and as the picture begins to reveal some of its intentions, his quick reaction time permits the twists to come at an urgent pace without risking the viewers’ ability to keep up with them. For the sake of payoff, I am not at liberty to divulge much more on that subject of what other secrets are buried in the narrative. But needless to say, there is no way any audience will anticipate the big reveals that it has to offer, even though the movie’s clear intention is to take unexpected left turns at every possible moment.

I must confess, however, that my first experience with the film ended with satisfied – but only passable – enthusiasm. But then the movie kept enough of a presence in my mind to warrant an additional viewing. The second time around, I saw (and appreciated) the full scope of the ideas more, and greatly admired the level of craftsmanship that went into the screenplay and the ambitious directing. Both Whedon and Goddard aren’t so much reinventing the wheel here as they are hacking it to pieces; their approach is ripe with enthusiasm for the obvious shift in direction, but it undertakes it with such blatant disregard to ordinary horror film boundaries that you suspect they are laughing hysterically behind the movie camera. And who can blame them, really? This is a movie that knows it is capitalizing on the clichés of its genre, but refuses to bow to the same simple-minded standards to achieve something more.

Horror/Comedy (US); 2012; Rated R for strong bloody horror violence and gore, language, drug use and some sexuality/nudity; Running Time: 95 Minutes