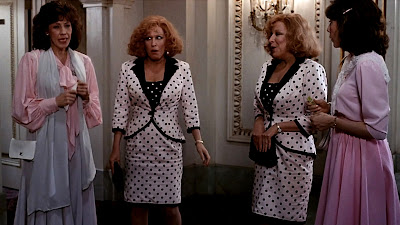 The movie is an oddity of incessant proportions, a comedy with few laughs but many unwarranted chuckles, which lives and dies on the notion its silly premise will at least be vague enough to provide its actors with great opportunities to improvise. And they do so to stellar conviction, which is how the movie finds its success. They are hog-tied in a screenplay that is dimwitted and force-fed, but they are aware of their plight and have immense fun at exploiting those problems to their advantage. You can practically visualize the actors gathered around a reading table, struggling hard to choke back groans of displeasure while sifting through the script pages before someone decides to speak up and say, “Hey, let’s go for broke and go over-the-top with this crap.”

The movie opens in the 40s, we suspect. A couple are driving through open land in West Virginia, scouting sites for some kind of business transaction, when the wife goes into labor. She is rushed to a nearby hospital in a small country town called Jupiter Hollow, where everyone speaks colorfully and the aged hospital nurse hums “Amazing Grace” while delivering pills to patients. As luck would have it, another couple from that town is also ready to deliver their own bundle of joy, and the two would-be mothers wind up in rooms opposite one another, where the doctor discovers that – get this! – both of them are delivering twin girls. Great for the mothers, not so great for the nurse: so used to strolling leisurely down the halls of her quiet facility, now she has to react quickly to the deliveries, and does so by making the critical mistake of mixing the babies up in their crib. Inevitably, this will lead to the twins growing up mismatched; not so inevitably, the father of one set of twins overhears the other naming their children Rose and Sadie, and decides that his set would benefit from having the same names. How convenient.

One set of twins is played by Bette Midler, the other by Lily Tomlin. Each plays dual roles that are a dichotomy in personality types: in one set that lives in New York, Midler is a power-hungry business CEO who walks through rooms with a disapproving scowl on her face, while the Tomlin character is uncertain of herself and clumsy; in the country version, Midler is sweet and driven by the wonder of the big city, while Tomlin hisses at corporate types and makes her points in scathing but lively analogies (“Is a Frog’s ass water tight?”). We suspect the writers are trying to make a statement about genetics in their execution of the nice characters – because the Tomlin twins belong in the country, the one that lives in New York feels displaced by metropolitan  life, while the out-of-place Midler character is envious of those who live in that kind of environment. This, however, does not become nearly as thought-provoking a statement as it could be, mainly because the nice sisters are not very fun to be around. Both Midler and Tomlin seem to have more energy playing the mean twins, and who can blame them? Here are two actors who don’t so much eat up the scenery as much as they swallow it whole, and their potent on-screen personalities dictate the need for more aggressive characters. Their combined chemistry is what makes the movie plausible on any level.

The laughs to do not come conventionally, either. Because the plot requires both sets of twins to come in close quarters with one another – the country twins go into New York to stop the sale of their town’s only main business to a Frenchman intent on strip mining the countryside, and said business is run by the other set of twins – there are several scenes in the film in which one twin walks through the scene and narrowly misses running into the other, sometimes only by a hair. This goes on and on to the point of annoyance. But it’s not exactly the kind of gimmick easily addressed in a plot this idiotic, unfortunately. If both twins see each other too early, after all, then the whole point of the movie ceases to exist.

No, the real amusement here – as unintentional as it probably is – comes in the reactions characters share after interacting with each set of twins, and not realizing that they are different people. Because the twins have the exact same first name, this throws many of them off any possible scent. Consider the manager of the Plaza hotel, who is introduced in a scene where he checks in the set of twins from the country (they wind up there because they are mistaken for the others, who are already set to check in there for the shareholders meeting). His interaction with the nice Midler is befuddling, because she is so overjoyed by her first experience in a big city hotel suite; the following day, he crosses the path of the mean Midler, who informs him that the wait time for her room was “inexcusable.” This is a repeating shtick that bleeds over onto not just supporting players but also critical ones, too – including Roone Dimmick (Fred Ward), who wanders into the city looking for his country sweetheart (played by Tomlin) and instead finds the city version. They dance around one another in an awkward but amusing manner, he being unaware of who she really is, and she amazed at how much he clearly seems to know about her, including her name. Sometimes the mistaken identity formula can be irritating, but here it works, and to elaborate scale.

The movie is missing many crucial ingredients, however. The writing is uneven. The pace is sluggish. Its ideas walk a fine line separating absurdity from logic, mostly opting to teeter in favor of the former. And the premise itself relies on most of its characters being completely off of a wisdom radar, because to ask one simple question or walk in one entirely different direction would basically cancel out the need for the story to go further; this makes it, essentially, an elaborated idiot plot. The director, Jim Abrahams, is predominantly an aficionado of spoofs, and it is perhaps fitting that the studio chose him to make a movie with such a ludicrous script. But he doesn’t really add too much to the mix other than extra absurdity, and after an hour and a half we are exhausted beyond belief. The one scene we hold out for, which involves both sets of twins inevitably coming face to face, cuts off way too early to be satisfying on any comedic level. Part of me wonders if such a scene even existed in early drafts of the screenplay. But I digress. The reason “Big Business” should be seen in any capacityl is for its actors, who recognize the stupidity of the story but refuse to let themselves be carried along with the current. They are ambitious, dedicated, talented people who revel in their skill, and they bring the material so much enthusiasm that you honestly don’t care how misplaced it all might be.