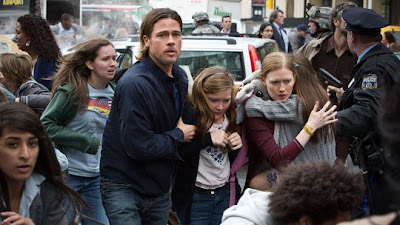 The story is extracted from a novel of the same name, which is popular to zombie enthusiasts for taking a less conventional approach to the undead narrative. In that respect, the material also views past examples into this genre as gross underestimations of its conflict, and answers them with ferocious intentions. This is not a story that will have anyone feeling optimistic; but it does very effective work in giving the premise some new meat to chew on, and the screenplay executes the ideas it has without limitations to scope or worst case scenarios. The title is deserved; if full-scale world war were to be waged against rabid villains, here is exactly how we expect it would play out.

The movie opens with little regard to setup. After a quick five minute introduction to Gerry Lane (Brad Pitt) and his family, they are sent directly into the first of many action scenes. They get caught in a traffic jam in downtown Philadelphia, where populace tensions appear to be brewing. Pedestrians start running in panic, and police motorcycles swirl urgently between cars, urging everyone to stay in their vehicles. And then there are explosions in neighboring alleys. Cars and trucks hit their gas pedals, rushing through swarms of panic-stricken people, all to avoid encounters with…. What, exactly? We don’t really know for sure at first, because any attempts the story makes to foreshadow the conflict via background radio or television broadcasts are thwarted by character chit-chatter in the foreground. Only a brief glimpse across an alley by the camera reveals what the source of the panic is: certain civilians are behaving as if infected with rabies, and each person they bite picks up similar traits, and usually only after a few seconds.

Through his and his family’s quickly-paced survival, we learn that Gerry is not just your average citizen; he is a former investigator for the United Nations, which makes him valuable to a government that needs quick answers to an escalated security issue. The plot quickly dispatches helicopters to find and locate the Lane family before they become victims to the outbreak; their success cuts it extremely close, ending in a scene atop an apartment building swarming with the infected. After transport to a sea barge a safe distance off the coast of New York, Gerry is called upon to lead a convoy of military personnel onto a South Korean medical facility, where they believe the source of this outbreak began. In the movie’s best scene, a doctor aboard the plane puts to rest the pessimism of anyone finding “Patient Zero” by making this wise observation: “Mother Nature is a serial killer, and like all serial killers, she wants to get caught.”

The brash, military-driven approach is unconventional for the material, which perhaps makes Forster an appropriate choice for director; with “Monster’s Ball,” “Finding Neverland” and “Quantum of Solace” under his belt, his exposure to routine action films is limited, and here is a movie that demands a less mainstream set of eyes. The decision is an effective one; the movie is paced with great urgency, and follows through at establishing and resolving isolated story conflicts without forcing them to bleed over into new obstacles. The downside to that technique is there is little consistency in exposition, and core characters only get a passing glance when it comes to development. But it is a sacrifice the filmmakers are willing to make in exchange for visceral entertainment. As the story jumps locales routinely and the action scenes are required to adapt to those demands, it would be unwise to split hairs over the idea that we might forget one or two names amongst a sea of hysterical faces. They are not what matters here.

Having a narrative that hop-scotches across continents in two short hours is a curious one. But each push brings its own interesting challenges to the screen, and they escalate the conflict to unique levels. Consider the difference in tone between the scenes in Korea and those in Jerusalem, for example; after the Gerry character’s lead at the medical base turns up nothing conclusive, he follows a bread crumb leading him to the holy land, where the Israeli government apparently is succeeding in protecting their people behind a fortified barrier based on intelligence they received prior to a zombie invasion. The sequences feel distinctly borrowed from a film about Middle East conflict, minus the presence of undead. Furthermore, the second act operates independently of the others, supplying its own unique style and perspective, and it all concludes in an airplane sequence so well done that it leaves the audience in a sort of bewildering awe. This is the kind of movie you hope not to see in-flight anytime soon.

What is even more commendable than all of that: the movie does not cave into the formula of wall-to-wall shootouts in its third act, and does something rather surprising with some last-minute revelations. I shall not reveal the full extent of what that entails here, but you will see what I mean… and I’m willing to be you will feel the same way. “World War Z” is not a piercing statement to a realistic possibility of these kinds of conflicts like “28 Days Later” was, and it does not offer new insight into a fairly congested genre of undead villainy. But it is distinct, off-beat and fearsomely entertaining, and functions on a canvas that reaches far beyond what we are used to in pictures of this nature. In the movie’s final moments, the Brad Pitt character glances lovingly at his family but has the air of exhaustion propping up his posture. After merely watching all that he does in two hours, we understand exactly how he feels.