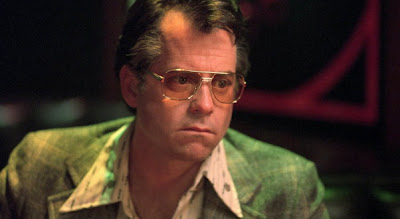 Crane, we are told, was once more than just a shell of a person. He had family, faith, and work ethic. When his agent drops a script for a comedy about a World War II German P.O.W. camp on his desk, he has the right sense to wonder if such a premise would be career suicide. “Hogan’s Heroes” inevitably launches with strong reservations and controversy, and Bob even knows better than to pin his hopes on an uncertain future on network TV; he opts to hold onto his radio job in the interim. His attitude is optimistic, his approach practical. Only his wife, starved for her husband’s affections, senses something amiss with her husband’s clean-cut image. But her thoughts are too ambiguous to sense the need for warning. If good dependable Bob cracks from all the pressures of life, exactly what would he be capable of doing, anyway? In this movie, no one knows him well enough to contemplate the possibilities.

Bob, in truth, is an aficionado of various extracurricular activities. He moonlights as a drummer at a few local strip bars. He loves photography. On the set of his new show, he meets John Carpenter (Willem Dafoe), who works as a sales representative for Sony, and travels the country carrying around new film and photo devices that he anticipates will be a big hit with the public. Bob is given the opportunity to tinker with said gadgets, usually in the company of beautiful women. The barriers fall abruptly the moment that the first woman comes onto him, and Mr. Crane begins indulging in extramarital trysts…. Usually while John’s cameras are rolling. The people closest to Bob are smart enough to escape his newfound vicious cycle before it consumes him, though neither he nor his “friend” see just how dangerous the lifestyle will become. “I don’t drink, and I don’t smoke,” he observes. “Two out of three ain’t bad.” Hey, gotta give him kudos for looking on the bright side.

What consumes Bob (and to a lesser degree, John) is not the act of making adult films itself, but more the voyeuristic implications that they produce. There are scenes where both men watch their work with such smug satisfaction that they participate in group masturbation – which is the big final reward in their minds, we suspect. Women are invited into their space under the ruse of good times and good conversation, and become props in the act of filmed intercourse. Do they know that they are on camera? Not all the time, it is said. But the story isn’t interested in those details, because the men are so absorbed in the “forbidden” that it would rather dissect their immense egos until nothing is left to the imagination. Considering how their story will come to a close, it is almost necessary for the film to do that.

The movie is not an exercise in pornography, though; it is too smart for that. What it is, ultimately, is a character study about two men who are really good at creating the impression that they are good people when they are basically just getting by as vacant shells as a consequence of their precedent. They are actors in life, not just in front of television cameras. Greg Kinnear, who plays Bob Crane, goes for charming and sophisticated in early scenes – perhaps to underscore the accessibility of Crane’s public personality both on and off the set of his famous network sitcom – but it is in later scenes when we see the full scope of his dedication. As the fallen television personality, he does not live vicariously through the characterization like you would expect most actors too. He truly embodies the scope of the persona, and creates a role that is only slightly sympathetic to the situation but always seemingly in charge of his destiny, no matter how improbable the final destination will be.

The screenplay by Michael Gerbosi does solid – if not electrifying – work in creating a world around its core players that feels like it is seeping in negative vibes. What makes the material work so well here is the perception that both writer and director choose to execute with its protagonist, which is not to provide overlying sympathy for him or his choices. To them, Bob Crane is fully in control of his own path, not warranting victimization or empathy in many respects. Likewise, they also don’t allow the John character to be entirely the enemy in this scenario, though he does share some of the blame. The story takes liberties with facts, to be sure; Crane was probably nowhere near as devout to his religious faith in the beginning as the movie portrays, and a claim made later in the film that he had penile enhancement was quickly denounced by the late actor’s family. So why the changes? My belief is that Schrader and Gerbosi are more interested in the rise and fall of a fetching public personality, rather than trying to tell history exactly as it may have occurred. History is never absolute enough to make the points desired by a film of this nature, anyway.

Schrader, who takes his subjects seriously and approaches most of his stories with little regard to polish or elaborate production, makes some very interesting decisions in his picture. The best sequence in the film is saturated by surrealism. In it, Bob is filming a crucial sequence on the set of “Hogan’s Heroes” when the scene shifts into a dream sequence laced with the innuendo of one of his pornographic films. What this scene illustrates is the inevitability of how professional masks and private obsessions can inevitably bleed into one another, and provides clear foreshadowing for further events. Crane’s public demise was indeed that: very public. When he appears on a cooking show and interrupts the taping long enough to comment on the size of a female audience member’s bosom, everyone understands that they are now along for the ride in a painful public descent. Except by that point, obsessions and fetishes are no longer just that; they are outright addictions.

The movie will not be for everybody. It is harsh, raw and unconcerned with an emotional charge, and it offers no excuses for the behavior of its lead. But it does understand that there are reasons for the way life turns out, and does solid work in giving its audience a stripped down analysis of the circumstances leading to Bob Crane’s fall from grace into an untimely demise. He had the whole world at his feet, was charming, and a bright spot of joy in a crowd of gray personalities. But he was also allowed to indulge in very dangerous fantasies, and eventually they consumed him… by his own hand, no less. Here once again is that timeless story of a great light in the world that is snuffed out by one’s own poor decisions, now localized by a small screen charmer who had much more to offer to the world than he was ever really capable of giving.