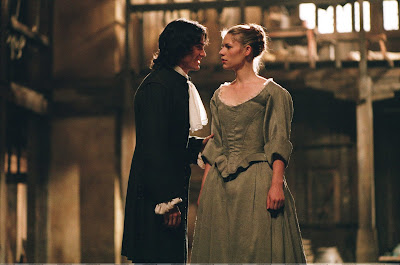 The comedic value that courses through the veins of Richard Eyre’s “Stage Beauty” is abundant in supply, staged with such savage and lively timing that it transcends the nature of the period piece comedy and becomes the work of a genius.  Written with the panache and wit that would inspire a vintage Woody Allen, it leaves little room for mere suggestion and an array of opportunities for the material to break free from genre constraints – in just two short hours, we find ourselves transfixed by colorful characters, savage parley, novel narrative twists and well-timed social awareness. To see the movie isn’t just an opportunity to observe a culture of actors and theater antics captured in a time capsule, it is also a chance to see ourselves enraptured so completely by their devious and amusing delivery. It truly is one of the funniest comedies of the last ten years.

The problem? The laughs it warrants never managed to reach the pitch that they warranted from audiences. At the peak of its theatrical run, the endeavor grossed a mere $160K on an October weekend in 2004, eventually fading from multiplexes without the chance to show on more than 80 screens at a time, or hitting $1 Million in total returns. By the standards of its studio – Lions Gate Entertainment – the fact that it even wound up in theaters is a miracle. In an ever-changing market that shows little sympathy to those inspired by the eras of old, “Stage Beauty” perhaps represented a style of comedy that most were simply past caring about, despite the fact that its humor resonates more deeply than that of more modern comedies that dominate the box office.

Their loss, not ours. From the perspective of someone who, like yours truly, savors the deliciousness of stories that take place amidst backdrops rich in the colors and textures of old, it is a triumph of evoking the era - but for those who care less about visuals and concentrate solely on a narrative, it is also one of those rare multi-faceted accomplishments that knows no boundaries when it comes to solid storytelling or sophisticated humor. Like the very characters that fill the celluloid, this is the kind of picture that comes with challenges but is not afraid to meet them - or indeed, overcome them - head on.

Comparisons to John Madden’s “Shakespeare in Love” are ideal; for one, the premise follows a similar thread, and it also applies the same fundamental reasoning to the story (which is that mastering the stage is such a rigorous task that one is capable of losing themselves in basic performances). But where these two costume endeavors differ is in this: that 1998 vehicle wanted to be pure romance with just slight twinges of humor, whereas Eyre's film is so filled to the brim with a broad collection of emotions - from sorrow to intensity to just plain morbid humor - that it warrants a completely different response. It is also a lot more politically incorrect film than the other, a notion which is anchored early on as King Charles II (Rupert Everett) tells a crowd about how priests blame stage acting for things like homosexual behavior and sodomy. "They would know a lot about that," he says. "After all, they're priests."

A slight historical knowledge on your part no doubt makes you well-equipped to know exactly where this premise is going. In Charles II's era, we are told, primitive laws that restricted women from performing on stage in England were abolished, and the men, who had dominated the art of theater performance for centuries were required to go back to their gender-specific roles so that their counterparts could play alongside them. Historians and feminists would no doubt cite the king's revision of the old British laws as a major step towards equality for the sexes, but was it really all that simple?

"Stage Beauty" argues an otherwise-unchallenged perception of that. At the beginning of the film, we meet Ned Kynaston (Billy Crudup), an actor who has played female roles for so long in the theater that he has developed a style of stage masquerade that literally follows him into dressing rooms. He is lost in the words of Shakespeare's tragedies, and a turn as Desdemona in "Othello" marvels audiences for its sheer sense of nerve and trickery. But stylized farce is his true ability here, not necessarily raw talent; his costume mistress, Maria (Claire Danes) knows this full well, and when she mimics his nightly performances off-stage - reciting dialogue and all - she believes that it takes more than an elaborate deception to be convincing as a woman, of which Ned knows little about.

Nightly, in the basement of a nearby tavern, Shakespeare's "Othello" goes on for additional performances - this time, however, with Maria herself assuming the role of the title character's wife. News of this unlawful undertaking reaches the court of the King, naturally, but being such a good-natured and reasonable monarch (and not wanting to tee off his latest young female companion), he tosses tradition out the window and has the country's laws banning women from the stage rewritten. This is an action which does not sit particularly well with Ned though, whose entire stage career has depended on disappearing into the role of a woman - now that his very own assistant has seemed to rob him of that opportunity, his life in theater is suddenly ripped out from under him (and with it, his very reason for being).

Eyre's intensity as a director here makes the final result a wonder on too many levels to count. Consider the film's sharp but offbeat visual flair, for instance; characters dress in costumes that are both rich and over-the-top (like a king's assistant whose powder wigs practically make his face disappear), and the photography tends to capture its players in situations that are not always the most flattering, at least to the casual eye. Likewise, he is also able to draw solid performances from even the most seemingly-inconsequential supporting characters; I especially liked Rupert Everett's turn as a whimsical English monarch, who is less content with living in rude luxury and seemingly more motivated by the privilege of doing something right - or at least different – for his establishment. But what is his ultimate virtue in this ambitious and observant tale, though? Simple: his ability to marry brilliant drama with brilliant comedy, and then furnish it with a deep sense of social relevance. This is a movie that can be enjoyed on so many levels, can provoke and inspire its audience in a relentless number of ways, that its appeal is magnified beyond the set standards for this genre.