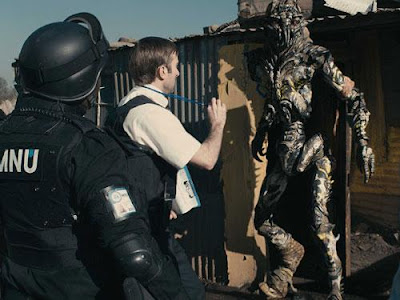 That the movie makes politically astute observations definitely muddles the issue. The film takes place in Johannesburg, beginning at a time when a mysterious alien craft descends from the sky and begins quietly hovering over the city skyline. Panic is not nearly as present as intrigue, and for lengthy stretches of time the ship merely levitates and lays dormant, never beckoning anything from its curious observers, including all levels of potential communication. After a period of uncomfortable dormancy, the government decides to intervene and prods the ship until they are able to cut their way inside, and their audacious actions yield a reveal that is hardly in sync with what the movies have taught us to expect of UFO encounters.

The alien beings inside, distressed by weakness and isolation, are not upright pale bodies with big eyes or bloodthirsty creatures with countless rows of teeth. Instead, what we get is a very insect-like visitor that looks like it was cross-bred from a grasshopper and a Predator. This kind of approach, is not meant to inspire fear, because the creatures are so absurd and over-the-top that you suspect your average defense against them would be a can of insect repellent. The humans in the movie are not the least bit marveled by their presence, and over the course of a series of quick narrative bullet points, we learn that the aliens are welcomed to Earth only out of necessity, and are rounded up and forced to live in isolation away from normal population. The “districts” they result in recall the racial segregation of countless societies across the globe, including several that currently are causing political strife in parts of Africa. What strikes me as most disheartening about this undertone: the movie makes very few strides to consider the alien occupation a sympathetic one, and it chooses to tell the bulk of its story through the eyes of human military personnel who round up the aliens and evict them from one district to the next as if Nazis occupying Poland.

The movie is told in two phases: the first as a mockumentary, featuring interviews with military personnel describing how the invasion quickly escalates into political conflict, and the second as a pseudo morality play. It is the second piece that warrants any true merit, because at least the story becomes localized on a more character driven level. The protagonist is Wikus Van De Merwe (Sharlto Copley), a bubble-headed corporate operative who is assigned by the MNU (Multi-National United) to relocate the aliens into another District that exists farther from human population. Followed by a troupe of armed guards to help him expedite the hostile evictions on said aliens, Wikus belittles them to their face, laughs at their misfortune, refers to them as “Prawns” – which becomes a widely-accepted racial slur in this society – and in some cases, watches on with no sense of empathy as those angered by the military orders are shot down in protest. The approach is merciless to a fault, and recalls the no-nonsense conviction of other films about political unrest in a military occupation. I’m not so sure this film earns the right to play that card, however.

In either case, eventually the alien characters get their moment. Once the film switches gears, we are familiarized with a specific pair of them, who seem to be carrying a secret of high importance underneath their shack. One of them, a child alien with eyes that belong in a Spielberg film, serves as the emotional pull from the opposing angle of the conflict. When Wikus and his military personnel discover another shack that looks to be some kind of alien equivalent of a meth lab, he is exposed to a chemical that squirts from a metal cylinder, and after said object is confiscated for testing, he begins to suffer adverse physical reactions from that exposure. These reactions will ultimately escalate into a situation that yes, even in a movie I am not completely fond of, I refuse to reveal in a review. But suffice it to stay, the twist alters the movie’s course, reveals the inhumanity of all the human characters, and gives an opportunity for the two “prawns” to show us that, deep down, they deserve none of the mistreatment that is handed down to them so frequently. In other words, it will do the right thing.

The issue with that approach is that the movie forces us to slog our way through incessant levels of discomfort in order to arrive at that conclusion. It is also not consistent with details, and after some twists it becomes incomprehensible as to where the crosshairs lie in trying to decipher what the true villain is: an idea, or a specific group of people? The Wikus character is written as if pulled from a Sunday morning newspaper comic strip; he is neither thoughtful nor very interesting, and virtually all important decisions that he is required to make come only as a result of grave circumstances forced on him. He also has an uncanny knack for being able to understand everything the prawns say to him, even though their language is mostly compromised of clicks and deep utterings barely audible by most human ears. My thought process: either can he see the same subtitles that we are seeing, or he took some kind of college course to become fluent in alien speak.

The special effects are remarkably crisp. You would not expect anything less from a movie produced by Peter Jackson, either; after singlehandedly redefining movie fantasy and setting new exciting trends in the world of visual possibility in the cinema, the idea of him spearheading a production with a stylistic sensibility less than acceptable is an absurd prospect. The aliens themselves move with fluidity that defies their digital boundaries, and the alien ship that hovers above the city is of such intricate proportions that it pops from every angle, even though the movie doesn’t really require it to be an important device until the final act. Their weapons, only viable to aliens and their unique claw-like arms, seem distinctly original, and the machinery that they bring down to Earth’s surface is intricate and exciting to watch (the highlight: a robotic sentinel whose weapons and movements are dictated by controls operated from the inside).

I do not mean to diminish the ideas that “District 9” brings to the table. This is not a movie that has been done before, and never with this level of novelty. But like all original ideas, success is determined by a menagerie of ingredients, not just the notion that the story is offbeat. The director, Neill Blomkamp, is relatively new to the fold, and I suspect the failure of the film is not nearly as much his downfall as it is the premise, which seems shockingly out of step with needed subtlety. Think of how challenging this all would be if was approached without such coarse intentions right from the beginning. The makings of greatness lie here; unfortunately, the movie does not live up to the promise offered because it is too busy with long lapses of judgment. It left me feeling less than whole.