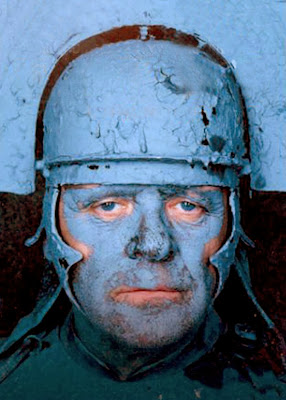 “I shall grind your bones to dust, and with your blood and it I shall make a paste, and of the paste a coffin I will rear and make two pastries of your shameful heads. And bid that strumpet, your unhallowed dam, like to the Earth, swallow her own increase! This is the feast I have bid hereto, and this the banquet she shall surfeit on… and now prepare your throats!”

He knows only what his time and civilization have conditioned him for: to slay the enemy, conquer his lands, and sacrifice all others – including loved ones – who might characterize a divisive strike against his fist or mind. That is the fundamental guiding force of old conflicted Titus, the main character at the center of England’s bloodiest stage play, and with that conviction he clutches an instinct that is hard-hitting and unsympathetic; audiences bear witness to the ensuing brutality like lambs carried through varying stages of slaughter. There is no hope for any who challenge his will, and those that may merely stand in his shadows as cautious observers are subject to similar fates. Like a spinning blade, the aged general of a dying empire crashes through lives without regard to the merits of human existence, and when a maniacal plot for revenge against him begins to escalate in the hands of bloodthirsty dissenters, it becomes only another platform for more macabre crimes against the flesh.

These are not the traditional virtues of a bard whose greatest works were human studies masquerading as hypnotic fables, but they do endure in order to place the great William Shakespeare in a context that is relative to most cultural norms. What was this highly respected and influential writer possessed by when he wrote the much maligned “Titus Andronicus,” and what significance did it uphold in the career that was to come? Audiences in sixteenth century theater were denizens of an era saturated in carnage at the hands of religious and political powers, but the play was born from a commercialist outlook established by many of his successful peers at the time: the bloodier the stage, the better the turnout. His offering was beset by almost grotesque implications: murder, torture, taboo interracial seduction, racism, implied incest, horrific rape, mutilation, dismemberment, cannibalism, and a little bit of everything else in between. But for a newcomer conceivably driven to make his name known amidst a professional pool that contained the likes of Christopher Marlowe, here was the means to an end: an endeavor that exploited the cravings of the blood-hungry masses in order to establish its creator as a noted voice in a crowd of would-be artistic philosophers. And oh how noted it became.

History recalls this reality in the face of a myriad of other artists across the storm of time, many of whom happen to be important filmmakers. The great James Cameron, for instance, began his career with “Piranha 2.” Peter Jackson’s origins include “Dead Alive.” Perhaps the greats see the lurid subject matter of death and dismemberment as ideal launching points to capture the conscious interest of eager audiences, as if the stories are meant to inspire an unrest that could evolve into intrigue as the director’s begin exploring new insights. Knowing this, and also understanding the viewer’s endless need to feast on the guts of unfortunate movie victims, then it’s really no small irony that Julie Taymor chose “Titus” to be the first film she would direct in Hollywood. What she does, perhaps better than most theater troupes might, is give the source a distinct modern perspective – characters are more fully realized than represented by the original writing, and the gore seems bravely held at bay behind a texture of culture-clashing sensibilities. It is certainly no less violent or suggestive than what its gifted author intended, but for any newbie to undertake material so deeply flawed to begin with, it’s a remarkable reminder of just how fresh and relevant old ideas can be if simply viewed differently from another’s eye.

The story is well known, even to those who detest it. General Titus Andronicus (Anthony Hopkins) has just arrived home after waging successful war against the rebellious Goths, and has delivered their cruel but beautiful queen Tamora (Jessica Lange) into the hands of Roman authority. Much unrest persists even after the battles have ceased; Titus’ final act of authority against the Goths is to execute Tamora’s oldest son before her own eyes, and an ensuing interference on part of the general’s sons in shielding their sister from marrying the emperor Saturninus (Alan Cumming) results in another killing, this time within the family. Meanwhile, the emperor marries Tamora after the ravishing Lavinia (Laura Fraser) refuses betrothal, and she uses her royal position as a tool in a plot of sharp revenge against the mad and violent Titus – a plot, of course, that reflects many of the essential traits of the bard’s greatest tragedies (though few were ever as frontally assaulting).

Many of the images play like sardonic reminders of the beastly inner-workings of men (or overzealous playwrights, depending on your perspective). Fetishistic undertones dominate the critical interactions between Tamora and mysterious moor Aaron (Harry Lennix), whom she woos behind the emperor’s back even as her vengeful plot reaches overdrive. The relationship she has with her flamboyant sons takes affection to nearly inappropriate levels. The infamous rape of Lavinia thankfully happens off-screen, but the aftermath is put on display just as one might expect it to look in stage performance: blood trickles from the brunette’s narrow mouth, and her arms have been removed and replaced with gnarled branches that maddeningly waver against a gloomy sky. The suggestion hardly ends there, either. When Titus’ son is accused of murdering the emperor’s brother, the court offers his head in exchange for one of the general’s own hands, resulting in a grotesque exchange of body parts. Later still, Tamora’s sons are hung upside down and their necks sliced open, and when Titus invites the emperor and his vindictive queen to dine with him over a meal, two plots of revenge converge in a confrontation so audacious and abhorrent that one wonders if Stephen Sondheim thought of it when he devised the premise of “Sweeney Todd.”

Taymor does not convey the material with straight intentions, however; rather, she arouses the same removed behavior that Marry Harron used when she directed the lurid “American Psycho.” What this approach suggests is that female filmmakers know how to look beyond the gory surface and get to the core of their subjects – the corruptive nature of the protagonists (if that’s even an apropos label) become groundwork for analysis, while the violence they cause is evoked with a certain notions of farce, as if nullifying their numbing influence allows one to understand the source. This effect reveals ideas that by today’s outlook seem barely audible in the original play. Shakespeare’s gory and almost nonsensical fiction was more or less about the patterns of hate and pain between vessels that cannot see past them as ways of life, while the Titus we absorb on film seems grounded in a pocket of self-awareness; he was raised by the blood on his fists, but his cycle is a fate that he laments from an angle of brooding powerlessness. Anthony Hopkins was perhaps the ideal casting for this lead; already well-versed in the premise of psychological underpinnings rising past pools of blood (his portrayal of Hannibal Lecter being the operative example), he plays Titus as a war-hungry tyrant incapable of changing his ways but resolved to playing through to the end with them. It is a sharp, observant performance, and Hopkins doesn’t risk his integrity for the sake of overzealousness like many other actors might.

The movie’s technical achievements are unlike any you will see in a Shakespearean adaptation. Cameras create overreaching establishing shots that are sharp and precise, while some isolated sequences – such as a brilliant opening image of faceless warriors clad in heavy armor as they march in unison over an empty arena – play as if interpretive mood pieces. The costume and makeup achievements, meanwhile, seem to unite modern flair with period sensibility (notice how Alan Cumming’s pseudo-fascist emperor appears almost androgynous in presentation), and Taymor uses weapons of many different eras (such as machine guns) strategically as props. These are not vague ironies; they exist to underline the fundamental thrust of the material, which suggests that these violent and sadistic patterns are timeless atrocities. The Tamora character, played by the radiant Jessica Lange, emerges as an apparent archetype of this sensibility. Who exactly were the “Goths” in Shakespeare’s texts? The material is never really clear with that directive, but Julie Taymor interprets the queen and her sons from a place of visual absurdity that seems necessary for the overall style.

Two glaring weaknesses: the very beginning and ending shots of the movie, which take place in a timeframe separate of the play but are curiously linked as if their characters are meant to observe and learn from what they see. What is the necessity? If lessons are what the director is after, the film is already full of them, even without the presence of meaningless figures book-ending the material. The final shot of a child wandering through a display of frozen bodies forever caught in moments of murder and pain ought to have been resonating in a movie where the child serves critical purpose; here, it feels tacked on as some sort of decisive moment of closure for the audience. To know “Titus Andronicus” in any capacity, however, is to know that there is no finality to these ideas – not for the characters who find peace only in death, and certainly not for audiences who sense the recurrence of these themes across the ages. These are, thankfully, minor and inconsequential quibbles. “Titus” audaciously steps outside of the tradition when it comes to film adaptations of the bard’s works, but it also does so much more: notably, find distinct meaning in a play where all notions of importance lacked a central point.