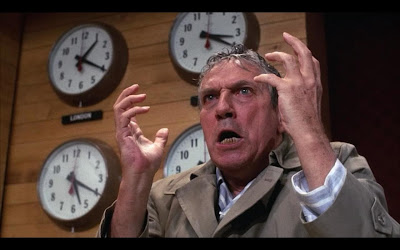 The famous images of American cinema don’t always endure through generational transitions, but the sequence in “Network” in which Howard Beale explodes with rage on broadcast television will likely be studied for centuries. When it was first revealed in 1976, audiences were caught off guard by the savage proclamation – in an editorial climate that was not yet bankrupt of journalistic integrity, the moment was virtually overpowering in the way it satirized the idea of a regulated national process caving into vulgar sensationalism. Such a moment normally would have faded into obscurity along with countless others weathered by cultural shifts, but in a society that has thoroughly mimicked the movie’s core irony, it finds a distinct resonance. Could the writer, Paddy Chayefsky, have foreseen that his biting sarcasm would become the actual medium’s underlying value system? It is easily the most important and influential image of any movie about this industry: not so much funny as it is precise and visionary.

I first saw the movie in 2001 during the height of my own studies in journalism arts, when the mass media of the post-9/11 climate was in full swing. Virtually overnight, we were witnesses to the dark realities of terrorism and war in a manner that was desensitizing, and combined with the idea of “viral videos” on the Internet that displayed animal torture and live beheadings, no grotesque stone had been left unturned. Stanley Kubrick’s key image in “A Clockwork Orange” – in which the “hero” Alex is forced to watch hours of violent entertainment while his eyes are forced to stay open – provided an early metaphor of the forceful nature of broadcast carnage, but few could have guessed that the once-informative news outlets could gradually decay into the doldrums of anti-information. Seeing “Network” after those realities were commonplace meant that I lacked the naivety of the movie’s earliest viewers, but in a modern context it offers other meanings: it is a perennial reminder of culture’s unending taste for blood, and how easily our most dependable institutions can be corrupted by an fundamental evil that is dictated by ratings over content.

The story is as intricate as its characters are expressive. A floundering network named UBN is making financial realignments after being purchased by an investment company, and big changes are afoot. The most significant: the firing of Howard Beale, the station’s primary evening news anchor, who is given the notice of his termination by his good friend and boss Max Schumacher (William Holden) at the start of the picture. The two drink, exchange dirty jokes, and wallow over the reality. “I’m gonna blow my brains out right on the air,” Howard announces. Max mocks the drunken tirade: “You’ll get a hell of a rating. 50 share easy.” Not thinking logically, Max allows Howard to go on the following night and announce his retirement. Alas, Howard’s private proclamation becomes literal, and he announces with unabashed dismay on air that he fully intends to commit suicide in front of the television cameras. The movie gives us this scene directly from the editing room, but none of the employees at the controls even notice; they are too caught up in everyday banter to catch the announcement until far too late, and the broadcast airs live.

There is immediate negative reaction within the network. Frank Hackett (Robert Duvall) pulls Howard completely off the airwaves, and berates Schumacher with threats of overtaking the news division. The sister networks report the material with certain dismay, and we see anchors like Tom Brokaw flash across newsroom screens as if vultures picking up the scent of looming death. The public projections, however, suggest a renewed interest in UBN broadcasting because of the outburst, and after Max puts Howard on for one more farewell, the ratings skyrocket. This opens opportunistic desires in Diana (Faye Dunaway), the new vice president of programming, who early on announces to her team that she wants “angry shows, counter-culture, and anti-establishment.” With the Beale episode in her arsenal, Diana’s drive turns the heads of her peers, and they start embracing the ideas as the keys to their survival in a competitive medium. To them, capitalizing on public hysteria in a world ravaged by war, Watergate and the economic collapse of the mid-70s is the new frontier.

The decisions stack in their favor. Howard’s rants get more vulgar and angry, earning him the distinction of “The Mad Prophet of the Airwaves.” Hackett turns his ranting into a weekly series, and sets Diana out in the world to find equally-lurid material to complete their weekly roundup. Some of her decisions are almost too crazy to make sense, such as one in which she proposes a weekly series revolved around the antics of the Ecumenical Liberation Army, which goes around filming themselves robbing banks and preaching “mutilated Marxism.” The movie is even audacious enough not only to show a business meeting between she and the group’s spokesperson, but even another that contains members of the army arguing over fine print in their television contracts with network executives (“I’m not giving him script approval! And I sure as shit ain’t gotten him into my distribution charges!”).

These are characters you wouldn’t want to engage with on any level, even superficially. The Diana persona is archetypical: she is driven by numbers and success, and literally brings herself to orgasm by reciting trajectories associated with her programming. Max, representing old school newsroom integrity, is somehow enamored by this quality, and the two begin an affair despite having existing marriages. Max, meanwhile, believes Howard’s insane rants have more to do with mental instability rather than new professional aspirations, but does not actively pursue professional help for him. And the Frank Hackett character looks at the industry as just another business model, and as long as he has material that is increasing profits and pulling the station out of a five year debt… then who cares about being classy, really?

The movie seems to occur in a reality that is closed off from 70s social norms, but that is part of its charm. The actors convey this ideal in an ensemble of outstanding performances. William Holden, so daring as Max, doesn’t talk so much as tango with literary euphemisms, and you get the impression he delivers them while grinning from the inside ( my favorite line: “She is of the television generation; she learned about life from Bugs Bunny.”). Faye Dunaway has never been better: striking and ferocious as the cutthroat programming executive gripped by success, we get the sense that she obsessed over the part for months in order to ensure hitting all the right notes (which she does, flawlessly). Duvall, likewise, has great energy as the careless but money-hungry president who is scrupulously shrewd in business judgments, and Finch as the anchor-turned-“prophet” Howard Beale is mind-boggling, almost too good to actually describe in mere writing. The heart of the movie, ironically, is in a short 5-minute sequence in which Max reveals to his wife, played by Beatrice Straight, about the affair he is having with Diana. Her response is noteworthy because of the mannered progression Straight utilizes when coming across as the devastated housewife, and her outbursts are so on-target that they reach far beyond the scripted nature of movies and find the transcendence of reality (no wonder, really, that she, Dunaway and Finch all won Oscars that year).

Trying to identify isolated moments of brilliance is a difficult undertaking, especially in a film wall-to-wall with effective instants and faultless dialogue. That’s because Chayefsky knew his characters were more than just ordinary people: they were corporate opportunists who drank in the culture of power like it were a natural resource, and they behave as such. The actors show alarming comfort in this material even in some of the more difficult scenes, like one in which Ned Beatty, playing the network CEO, confronts Harold after one of his broadcasted rants undermines the network’s prospects for a merger with Saudi Arabians – this is executed with minimal fanfare but grandiose verbosity that is almost hysterical. Other great scenes are remarkable in the way they emphasize the rapid tension of a real newsroom, and the movie’s turning point – a scene in which Diana speaks at a shareholders meeting to thunderous applause – plays more like a political rally (is she their key to a great financial success, or their conduit to a future seeped in violence and bloodshed?).

And yet it all comes back to that single image of good old Howard, drenched from the rain and still wrapped in a soggy coat, going off on a tangent in front of TV cameras about the necessity to get “as mad as hell.” What is it about this one, isolated moment that sticks out above all others? Maybe it is in the performance, which was the most important of Peter Finch’s illustrious career (he died shortly after making the movie). Maybe it comes down to the observant tone, which captures the mass frenzy of an angry populace and uses this one persona – a victim of bad business management – as the critical outlet. Maybe it’s all in the idea that his predicament is universal, and his gumption to stick his neck out so hastily for all the right causes appeals to our own deep desires. Or maybe it’s all of those things, and none of those things. The mystic quality within “Network” is that it pitches curve balls at us that have meanings relative to our unique situations, and all of them encompass a value that is beyond simple comprehension. This is one of the all-time great American films: stirring, observant, devilishly entertaining, expertly written, and played from an angle that allows its filmmakers to wink at an audience without always giving away its countless farsighted secrets.