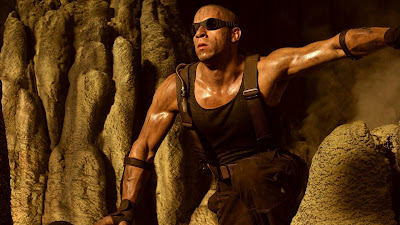 The Riddick character always was more productive and interesting in the shadows, which may explain why the newest movie about him revisits the approach of “Pitch Black.” In that film, a spaceship serving as a prison transport (carrying him and a slew of other misfits) crash-lands on a desolate planet in which bloodthirsty aliens who only come out at night are let loose by a solar eclipse, thus leaving all the human lives in a state of danger that forces them to trust a precarious killer. After a narrow escape, the follow-up (“The Chronicles of Riddick”) saw him descend into a more evolved alien world of utopian palaces and cutthroat politics, inevitably leading to an ambitious climax that required him to become their unlikely leader. So much for a long prison sentence.

What happens between that moment and the prologue of his new movie “Riddick” is fairly inconclusive, but here is what I gather from it: the empire, wanting to overthrow him because of his standing as an outsider of “Necromonger” society, attempts to assassinate him on a distant planet similar to the one of the first movie, but Riddick escapes the struggle still intact (though mildly bruised and beaten), and begins adapting to his surroundings like the greatest of survivalists. You would think a race of aliens that is supposedly more powerful than most would stick around long enough to ensure they didn’t leave him with a pulse, but I digress.

What isn’t so easily forgiven this time, alas, is the imbalance of competence in the supporting characters. The first two movies were more or less ambitious action pictures with an extremely intelligent anti-hero at the center, and the stories at least made an effort to surround him with an ensemble of players who knew how to hold their own against his shenanigans when necessary. In “Riddick,” those who eventually engage with the unchained criminal after his discovery are not exactly the sharpest knives in the drawer, and the movie involves them in countless scenes in which he sets traps without anyone noticing, slips through shadows undetected, and so on. And for the entire duration, even when they assume they have finally gained the upper hand on him, Riddick remains in a position of skill that reduces him to a plot device – an invincible object used to exploit the dimwittedness of others and little else. For a movie with the clear desire of remaking the atmosphere of the original while taking few new risks, this approach is self-defeating.

The first act has the right idea. Riddick wanders an arid landscape of overreaching cliffs and muddy pools that seem curiously inspired by Bradbury’s “The Martian Chronicles,” and they are filled with vicious life forms that hide in shadows and ooze from various orifices. His only companion is a scavenger rescued as a newborn, whom he raises to be sort of a companion canine (it protects him from danger, responds to commands, walks by his side, etc.). The subdued pace of these first scenes is not frequented in a genre that usually demands wide-scale special effects and loud explosive action scenes, but they work because the character has the right command of his solitude. There is an early scene in which he leaps into a pool in order to hide from flesh-hungry beasts and must maintain frozen posture while submerged in order to not aggravate the piranha-like eels that are slithering around him, inspiring a moment of tension that harkens us back to some of the best nail-biting moments of the “Alien” pictures. Most movie stars can barely hold a frame by themselves for longer than a couple minutes without chewing on scenery, but Vin Diesel maintains a composure that is refreshing for action stars, and I would probably pay the admission price if he was the only person on screen for two hours.

When Riddick manages to cross the jagged terrain and reach more open fields, however, the material retreads back to formula. A human outpost used to send out distress signals to neighboring worlds is activated, and because it recognizes Riddick as a wanted criminal, the intergalactic announcement is met with almost immediate responses. Two ships of assorted misfits – one of grungy rebels acting as bounty hunters and another of well-dressed space marines – arrive and begin ball-busting one another over their prey’s impending capture. The leader of the rebels is Santana (Jordi Mollà), who arrogantly announces that he will collect Riddick’s head because he “knows all, sees all, beats all.” The enigmatic Johns (Matt Nable), the leader of the other faction, warns his competitor that this is not one of those dangerous criminals who just rolls over to get caught, and patiently sits back while the crew fumbles on nearly every attempt they make at an apprehension. What motivates Johns in his capture is not so much about money or prestige, but information: because Riddick was the last one to see his son alive (as chronicled in the first film), he has an eyewitness account of the events that may hopefully put a dot at the end of a long period of uncertainty in the kid’s demise.

The cast seems assembled in what we now refer to as the “Cameron ensemble,” which requires roughly 80 percent of the team to be wisecracking but disposable (for the sake of inevitable fatalities, of course), the other 20 percent to be silent bad-asses (such as a woman who beats the Santana character to a bloody pulp after a come-on), and their leaders to comprise of either thoughtful qualities or arrogant tendencies. The technique was perfected by James Cameron in “Aliens” and has become the standard of science fiction character teams since (even used again later in the director’s own “Avatar”), and here director David Twohy makes full use of it right down to the token asshole (Santana) who is short-sighted and too smug to know that he will probably be laughed off screen by a hateful audience well before the final act. I suppose that makes Riddick the Ellen Ripley of his universe, and even here you can see why: his sarcasm and poise are laced with a thin veneer of the foreboding that makes the material tolerable, and you always get the sense that his checkered past has given him the perspective to work through any situation, however bleak. New idea for Hollywood to chew on: why not just give him his own film in the “Alien” universe?

All of these pieces of information will inevitably lead to Riddick’s capture, then to the clichéd scene in which the criminal banters with his captors over impending dangers, and then even further into the formula when a violent rainstorm blots out the sky and releases yet another series of monstrous aliens who only come out during environment changes – in this case, moisture in the air as opposed to darkness. The triumph in “Pitch Black” is that the progression from one point of story to the next was gradual, and paced carefully so as heighten the tension rather than overload it. Here, however, that idea is directly remade into a series of generic action sequences with no effectual buildup, and shots that are muddled and inconclusive as they flash from one angle to the next without any rhythm. In a movie climate that follows this approach usually to the letter, why even bother? Twohy directed both prior Riddick movies in addition to this one, and now occupies a spot in an elusive league of directors who managed to maintain ownership of an entire film series without the studio hiring someone else in to execute later sequels. One would suspect that a man who took such audacious risks in the second film would have a few more surprises up his sleeve for the third round, but I guess not. Unless, of course, the studio was so nervous after the so-so business of “The Chronicles of Riddick” that they preferred formula over chance. Yeah, that probably makes more sense. 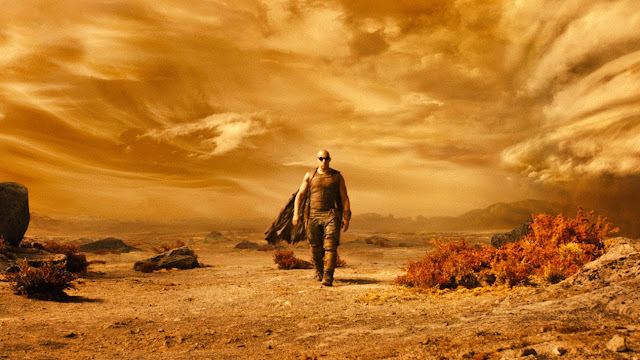