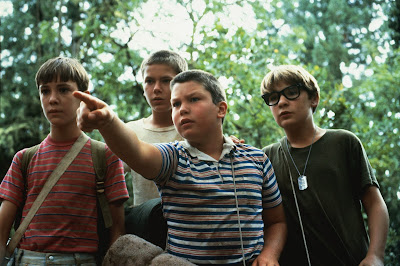 When you are an adventure-seeker stuck in that odd transition between early youth and adolescence, few movies resonate more than “Stand by Me.” Our suspicions suggest all the right notes are found not so much on the basis of having gifted filmmakers telling this story, but in the implication that its ideas come from within a collective experience that all men recall with some fondness (or alarm) as they grow older. Rob Reiner, Stephen King and Bruce Evans often find this trait meandering through many of their endeavors, and it’s a wonder they even bother referring to some of those stories as works of fiction. Together, they seem destined to write the prototype for what nearly all male youths will endure on their journey towards a more informed state of wisdom, and here it is all told in a setting where a quiet community is altered by fate’s own sleight of hand, and four spirited individuals are challenged by an event that will compel them to grow up much sooner than they should.

How ironic that even 25 years after it left behind an impression, the film still holds firmly to that power. The reasons are simple: core characters emerge from the clouds of tragedy with ideals that place them at the center of all cultural certainties, and their predicaments are relieved of most generational distinctions. They speak in vulgar analogies, engage in immature pranks, and discover humor in situations that most others would find bleak or deadening. What is the source of their outlook? They cling to their innocence even as the world around them grows darker, and when the plot insists they confront the gnawing influence of reality head-on, they refuse to be broken by the experience. That they consistently depend on each other to make it through difficult moments deepens the impact of their interactions, too.

The movie centers on Gordie Lachance (the narrator), who is seen at the start of the picture as an adult paralyzed by the headlines of his best friend being murdered, and then recalls his memories of the summer of 1957 when he and three of his friends embarked on an adventure that changed the course of their very carefree existence: a journey deep into the nearby woods to find the body of one of their very own missing classmates. Weeks prior, Ray Brower had disappeared and was presumed dead by authorities; now, armed with a veiled suggestion that his remains rest by a lake near where train tracks cross through the woods, the four expect to find the body, bring it back to town and be hailed as heroes by the media. The expectation is rooted in that classic naivety of young stubborn boys, and in the hands of these four it makes for a journey thick in sarcasm but laced with an underlying dread that sneaks its way into their upbeat demeanors. You can’t blame them for taking such a sarcastic approach; sometimes laughter is the only medicine.

“Stand by Me” cuts through what might otherwise be perceived as a devastating tragedy with a sense of cheerful displacement; in turn, we find certain nostalgic amusement in the way the young characters converse over embarrassment, implausible fears, the uncertain future, camaraderie and, most importantly, bullying. They also deal with devastating pasts that feel like shadows looming off camera. Gordie is a stranger in his own home because his parents are too devastated by the untimely death of his oldest brother Denny (who was killed in a car accident four months prior). Teddy (Corey Feldman) was abused by his mentally ill father and bears the physical scars in the form of a burnt ear. Chris (River Phoenix) lacks a support system and has often got into trouble at school as a way of acquiring attention from the adult world. And pudgy little Vern (Jerry O’Connell) has the unfortunate habit of being in the wrong place at the wrong time, and often verbalizes his inner paranoia in ways the others find comical.

The hero reflects the ideals of all natural storytellers in potent voice-over; as a teenager he encompasses an uncertainty in his literary talents and aspirations that nearly sabotage his momentum, and as an adult he looks through personal situations rather than around them in order to avoid glossing over details. Some of his observations underscore youthful optimism (“Everything was there and around us; we knew exactly who we were and exactly where we were going”), while others expose the hardened reality that is inevitable with age and change (“Friends come in and out of our lives, like busboys in a restaurant”). If his inspired mind is what fuels the story’s critical details, then the heart of the film lies mostly in his relationship with Chris, who sees the world perhaps a little more like an adult than he should –often viewed as “fatherly” in how he helps his friends work through moments of melancholy and trauma, his encouragement creates a precise fitting against Gordie’s own quiet but analytic nature. Without either of them leading the way here, one suspects Vern and Teddy would simply sit in a corner and make fun of one another for two hours.

The frequent interludes of comedy are brilliantly realized. Based on King’s popular novella “The Body,” the movie intercuts its sobering undercurrent of pathos with frequent dialogue exchanges that are succinct, carefree and sometimes rather amusing. Note the early scene in a tree-house when three of the friends are playing cards, and passing around dirty jokes and snappy insults in between hands. “You four-eyed pile of shit,” Chris says to Teddy. His response: “A pile of shit has a thousand eyes.” Tense moments lead to no less amusing observations, and after two of the friends narrowly escape outrunning a train across a bridge, one of the others chimes in pointedly: “At least now we know when the next train was due.” Some might have considered this all just juvenile banter in most movies, but to suggest that here is to dismiss its perceptive intent: these exchanges are the critical coping mechanism for four kids who are caught in the clutches of a heartbreaking journey, and for the audience they become the path to which we empathize with their plight, gain perspective in their approach and, ultimately, find parallels in our own formative years.

The movie was notable in its day for its distinctive ensemble of actors, and you can still see why: aside from the great Richard Dreyfuss and even Kiefer Sutherland occupying key roles, the four adolescents are well known in today’s celebrity world, sometimes for the wrong reasons. Wheaton was a regular fixture on “Star Trek: The Next Generation” and continues to have a thriving career on television, while Jerry O’Connell became a Hollywood heartthrob and is frequently seen in mainstream comedies. Corey Feldman endured brief success in film before a life-long addiction to illegal substances pulled him away from the spotlight, and River Phoenix, the most promising and intense of the four, saw his life and career cut short after a fatal drug overdose at a nightclub in 1993. In movies about youthful buddies, seldom does one automatically recall each member of the ensemble with clarity; here, that notion suggests a certain spark between the four that is unmatched, almost as if it were a divine union in the hands of powers much greater than its filmmakers.

Is the story really about anything more than just an isolated experience punctuated with occasional run-ins with unlikable adults? Not really. But that’s the undercurrent from which it finds its meaning, and acquires our admiration; much is said and discussed, and there are several moments along the way that shape the characters, but the movie refuses to put them in a narrative that demands major fanfare or thrills. What would be the purpose of that? Rob Reiner, whose films usually involve the camera zeroing in on people who are already headlong into important conflicts, knows his best avenue here is in conveying the mood directly from the eyes of his adolescents. It is an approach that is resounding, and the screenplay by Raynold Gideon and Bruce Evans involves its observant heroes in simple scenarios that are, for the most part, just part of the normal routine of growing up. How sad that their lives will ultimately be shaped by such a grave discovery as that of a dead body on a riverbank just outside of town.


Drama/Comedy (US); 1986; Rated R for language, violence and a brief scene of death; Running Time: 89 Minutes