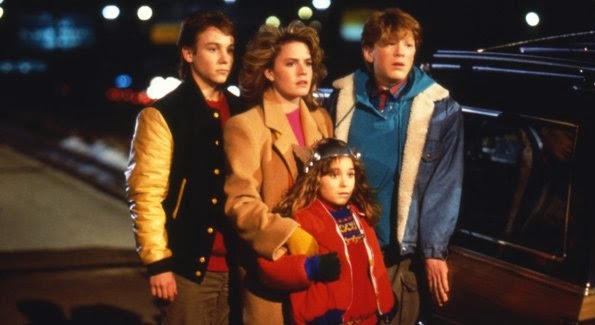 The film stars Elizabeth Shue as Chris Parker, a senior in high school that devotes much of her energy to maintaining a relationship with an older man. When he shows up one morning to cancel an important date, she is encouraged to spend the evening baby-sitting a neighbor's daughter and son while their parents are at an important dinner date in the city. While not the most exciting idea on her mind, she accepts.

The evening gets off to a typical start, with Chris meeting the two children (a girl named Sara with an obsession for Thor, and a boy named Brad with a secret crush on her). She expects jump right into something monotonous when her best friend calls her up on the phone in a quandry: she is alone at the bus station without money after a failed attempt to run away from home. Now stranded deep in the city, Chris decides to take everyone along with her to rescue her desperate friend.

Along for the ride is Brad’s best friend Daryl, a horny and perverted teenager who shares the same crush. Halfway down the freeway a tire goes flat, just as it comes to notice that Chris' parents have neglected to restock the spare. The solution: flag someone down to go buy another. Next problem: Chris has forgotten her checkbook. Added dilemmas arise with each new progressive twist, and the four eventually wind up in a truck of a man with a hook in place of a missing hand. Further tension comes to pass when they attempt to hide in a car after the man attacks his wife's lover during a stop at home, and the car is hijacked by a member of a secret thief operation in the heart of downtown.

Very seldom do we believe any of these things are possible. Most adventures involving child-sitting take place at home when little brats drop paint on the carpet, set fire to a bedroom, or give the family pets a home perm. They are exciting in their own, warped way, like elaborate fantasies of a child's dreams, in which everyday scenarios are supplied with rebellion. There is one peculiar but fun scene in which the four kids, chased down by determined employees of the car theft ring, wind up inside a Blues club in which the current act demands that they contribute to the music ("no one leaves here without singing the blues"). Other anecdotes: the four wind up on an empty subway and are cornered by two rival gangs armed with switchblades (not to mention bad tempers); and they are chased farther into the city and, ironically, to the very building in which Sara and Brad's parents are at a party. All this happens with swiftness and determination, no less; clocking in at approximately 102 minutes, the movie covers a lot of ground in relatively short order, necessitating its need to rush through twists so swiftly.

The script depends much on coincidences to heighten the excitement, although most of them are fairly transparent ploys to insist some level of tension. The most flawed, and perhaps unnecessary, sequence involves Sara scaling the outside window of a high rise in hopes of hiding from a group of thugs. One of the bad guys "heroically" steps out on the ledge to save her, only to get caught himself as she is rescued by Chris. This dreary climactic act lacks momentum, and fails to live up to the thrills of the previous adventures. But of course all things this innocent must run out of steam eventually, I guess.

"Adventures In Babysitting" is hardly an involving misadventure for suburb kids in a vast city. But it has fun with itself, and that's important; given this type of straightforward material, one cannot expect to find much to enjoy unless, at first, the script is able to realize its own simplicity and relish in the clichés. At that point, the characters are cut free from their restrictions and allowed to inhabit the situations with more than just deer-in-the-headlights outlooks. This is innocent material with a tendency to flout basic guidelines and stray from the perimeters of believability, but any film with a title this suspicious is bound to go off the rails eventually.