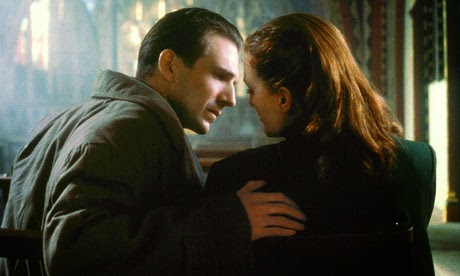 Besides, one enjoys seeing the formula take new and exciting directions; a fine example of the adultery angle is found in "Love Affair" starring Annette Bening and Warren Beatty, in which two married people discover that, sometimes, your soul mate may not be the person you actually marry. Then again, there is also an opposite outlook to be considered in this rather risqué situation; sometimes affairs can lead to fatal attractions, when one of the adulterers breaks off the affair for one reason or another, and the second develops an intense obsession.

Neil Jordan's "The End Of The Affair" is that kind of movie (if you couldn't tell just from the title). Adapted from a highly acclaimed novel by Graham Greene, an immoral encounter between two obviously-destined individuals suddenly becomes complex when one breaks away from the affair, and the other develops a fixation with her very existence. Given its World War II time frame, the story is, not surprisingly, completely encompassed by the lavish sets, detailed costumesand intricate art direction, reassuring the audience that literally anyone can be deluding even if they look well-groomed. Yet through all of this beauty and attention to detail, the story itself lacks the fundamental passion, and the two important characters are portrayed with too much dislike and not enough chemistry to even get them through the first physical encounter. The title may refer to an end of an affair, but the end of the movie is the best thing that can happen to either of the players.

Ralph Fiennes, trying to recapture some of the success he had in "The English Patient," plays a novelist named Maurice Bendrix, who mulls over an abrupt end to a marvelous relationship with a married woman named Sarah Miles (Julianne Moore) nearly two years before. Both shared such a strong bond with each other that Bendrix himself had the illusion that the relationship would go on forever; it didn't however, as Sarah, a married woman, ended the affair for some unknown reason.

The two years have come and gone, and Maurice suddenly comes upon Sarah's husband Henry Miles (Stephen Rea), who seeks guidance as he suspects his wife is cheating on him. Feeling the old flame rise again, the novelist pursues a private investigator to study Sarah, essentially so he can get his explanation (and maybe even a little more passion) from his "true love." Ironically, Fiennes' character claimed his love after knowing her for only a few short days (or was it hours?). It is said that love takes time to grow; but Bendrix's immediate announcement, and how Sarah responds to it, is so unbelievably fast that you want to throw sometime at the screen. For anyone expecting the novelist to be some sort of stalker, this would be the first clue. The man in general left me feeling amiss and creepy.

Even without much ambitious creativity on its side, the movie manages to push a few buttons with its messy realization and pretentious conviction. Graham Greene's novel is said to be one of the most well-written of its genre, but the script rips apart at the seams and Jordan steps back to survey the damage; if it is anything like the novel, I'm afraid Greene's work has been drastically overrated. Luckily, there is enough foundation and explanation to support the story for those who've never touched the book, which is more than I can say for "The Cider House Rules."

When I refer to the lack of passion, I'm not implementing that there isn't enough nude scenes. Surveying the entire 105 minutes, much of the time is actually spent behind closed doors, in which thrusting and heavy breathing are staged with such preposterousness that it's as if the lovers are struggling to make whoopee in the most puritanical positions. At one point we see Maurice become hot and heavy without even loosening his tie; furthermore, the look on Julianne Moore's face seems somewhat baffled, as if she was suspecting Dirk Diggler but wound up with a poor imitation instead.

The movie is driftwood for its creators, a monumental shame for its actors. And that's a pity, too, especially considering the source material the screenplay is adapted from (not to mention the spellbinding style the film adopts). Someone could have taken this wildly successful story and given power and emotion to the root system. "The End Of The Affair" is depressing evidence of how a popular book can be responsible for inspiring and entire movie so annoying and irresponsibly bland.

Produced by Neil Jordan, Kathy Sykes and Stephen Woolley; Directed and screenwritten by Neil Jordan; based on the novel by Graham Greene