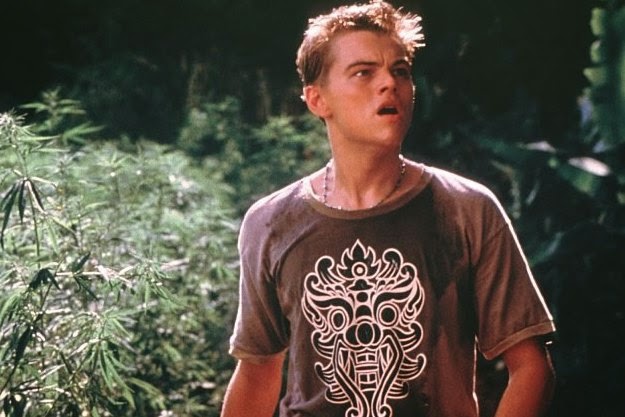 The individual in question is a Scot named Daffy played by Robert Carlyle, who apparently sees in Richard an adolescence that can easily turn a quest into a monumental nightmare. There is a brief meeting between the two, in which Daffy describes a forbidden island paradise where the water is as blue as the sky, and the shores glittered with sugar-colored sand. Only a small group of islanders who have distanced themselves from mankind thrive on the shores. Richard is so intrigued that he returns to Daffy's hotel room the next morning; there, the Scot has killed himself and a map is left behind.

Richard, seeking out this place, offers his other two neighbors, a French couple, to tag along for the adventure. Unfortunately, any attractive female in a movie with Leonardo DiCaprio is bound to do more than just tag along; much of the first half of the movie plays out like an ill-fated romance, in which Richard makes all the desperately obvious advancements towards his fellow traveler, and almost every attempt fails (at least she is written with an aware conscience and is able to keep him at bay). I choose not to reveal how far this infatuation goes, though, because DiCaprio is the type of star who can reel in enough moviegoers to find out for themselves.

The island is indeed everything that Daffy made it out to be; lush, colorful, flawless, and even eerie. The cinematographer takes advantage of all these traits by pinning low and getting elaborate shots of steep cliffs and tall vegetation, and there is even a sequence in which a romantic encounter is choreographed underwater to make use of the crystal-clear sea that surrounds the patch of land. Given the fact that the year has seen very few picturesque endeavors, it might not be so far-fetched to say that "The Beach" is the best-looking film to come out so far this year.

But the story, alas, deteriorates right before our eyes when it tries to pursue new initiatives. Soon after the island is discovered by our three wanderers, they are embraced by the island civilization, who demand that the visitors promise never to reveal the location of their paradise to anyone on the mainland. But a subplot erupts out of this request when Richard realizes he copied the map for some others before setting off on his quest; at that point, the screenplay makes a drastic shift and suddenly becomes a fast-paced action-adventure in which Richard becomes an ideal candidate for straight-jacket fitting, and he is forced to accomplish all sorts of stunts in the style of a Rambo spin-off. What for, you ask? The theme of the film, and the book it is based on, is that those in search of paradise can pay high prices if their discovery is treated with carelessness and omission. The movie gets really depressing and familiar with this new direction, though, borrowing its hinges from the plot devices of "Lord Of The Flies" and "Apocalypse Now" without a clue as how they should be handled. Further depressing is how Richard suddenly sees himself as a hero in a video game, and the movie pastes in several video game screens featuring a character done in the visage of DiCaprio himself.

Furthermore, each moment of suspense is approached with such boring conviction that the build of tension itself never really manages to get off the ground. No, not even when Richard discovers Daffy after committing suicide, and a map to an island paradise is left behind; no, not even when the three adventurers are crouching in marijuana fields hiding from the nearby islanders; and no, not even towards the end in which we see Richard have an encounter with a deadly sea beast. Surprisingly, all the suspense comes out of the most pathetic shots; by the time all has been said and done, the most thrilling thing anyone has seen is DiCaprio drinking the blood of a Snake.

There is so much wrong with the narrative that it cruises for the first hour, meanders uncontrollably for the second, and then self-destructs just before the lurid climax. Some twists are so incredibly pretentious that one wonders why DiCaprio felt so strongly about doing this film. His character is discrediting to his image as well as his real talent, not just by going against the "pretty-boy" perception, but for also being too determined at times and then incredibly dimwitted afterwards. That is a shame, too, especially for anyone who looks at the character of Richard and sees so much potential. Here is a movie that could have given its characters exciting tasks to fulfill in an island wilderness, and at all the most suspenseful moments has Leonardo DiCaprio swim with the sharks.

Produced by Andrew Macdonald and Callum McDougall; Directed by Danny Boyle; Screenwritten by John Hodge; based on the novel by Alex Garland