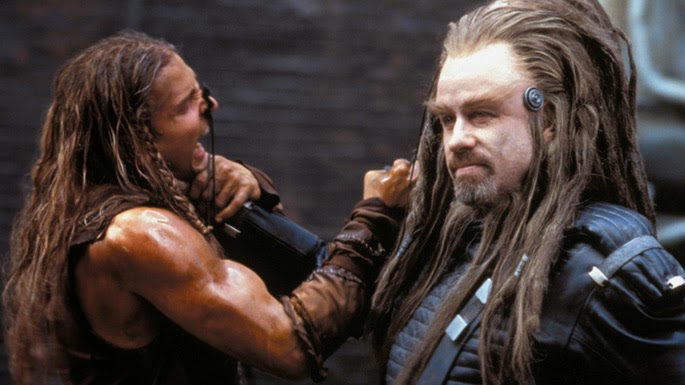 Ah, but such misgivings are only a taste of the disaster that is “Battlefield Earth.” There are bad movies, really bad movies, and movies so rotten that calling them bad would be an understatement. There is no denying that this film falls in the latter category: it’s an ugly, idiotic, pretentious and dreary little film that, if anyone cares, has been anticipated by many because of its name value. Based on the novel by L. Ron Hubbard, who is famous for his school of scientology, this production has been circling the rumor mill for years, in anticipation of the millions of readers who proudly call it one of the greatest science fiction stories ever made (a friend even says it’s the “Lord Of The Rings” of sci-fi). When trailers debuted a few months ago, the sight of John Travolta supporting dreads and a blue skin-tone sparked immediate interest. Neither them nor those who hadn’t seen the teasers, though, could have possibly imagined the end result being the worst summer blockbuster since “Speed 2: Cruise Control.”

Travolta is Terl, a member of the elite Psychlos alien race who has been appointed to head of security at the alien base on Earth. The year is 3000 (ever notice how futuristic films take place at the dawn of new millenniums or centuries?), and Terl is generally unhappy with his position. But he cannot do anything about it because orders come from Home Base. When a human prisoner is brought in after being captured in nearby mountainous terrain (the poor unfortunate man here is played by Barry Pepper), Terl is inspired, I guess, to occupy his time by stealing all sorts of gold for himself. Branching from this premise are several equally-stupid subplots that, at one point or another, will have audience members staring on in utter discomfort and anger.

Earth is shown here as a shadow of emptiness and ill-fated dreams, and not just in the visual sense. Buildings from the great metropolises on Earth’s landscape stand in decay, with piles of rubble encompassing their foundations. The idea of seeing earth in this condition surely is interesting, but with “Battlefield Earth,” images are too muddy, dark, and swiftly photographed to appreciate. It’s as if someone in the visual effects department said, “let’s take the darkest scenes from ‘Armageddon’ and just add remnants of buildings here and there to cover up any similarities.”

There’s more to the flaws than that, though. But to conserve possibly valuable time, I shall describe its other inadequacies without any hesitation. The story is bloated and inane and lacks tremendous details. The characters are as complex as a tube sock. The cinematography is overly swift and indistinct. And the conversational tone is like listening to Howard Stern on helium, with each member of the Psychlos speaking in this irritable voice that has the same effect as scraping fingernails across a chalkboard. This only adds to our frustration, though, from them referring to us humans as “man-animals.” Exactly what is the significance of the “man-animals” label, anyway? I scribbled a couple of possibilities down on a pad of paper, but the mind went blank without much thought. Sitting through this endless pile of crap, I can guarantee my mind wasn’t the first thing to give out, either.

There is no problem with sci-fi pictures in which humans are the target of a takeover by creatures unknown to the world. But there are some really really bad ones like this out there, and they should be targets in shooting galleries. Like “Independence Day” and “Mars Attacks,” “Battlefield Earth” bathes in a pool of utter ridiculousness and cheesy visual styles, then stands up expecting everyone to admire it. At least with the other films, something actually happened in the two-hour running time.