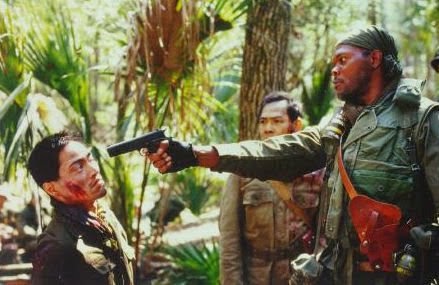 Even then, the movie might have been tolerable had there been the smallest crumb of inspiration afterwards. Forged by endless clichés and formulas straight out of various courtroom dramas and war epics of the past decade, “Rules Of Engagement” is a ho-hum endeavor; a movie that thinks originality is not significant, just as long as writers are able to clump together all sorts of plot twists found in other, better movies for their own propaganda. But if this is indeed the age for new cinematic perception, folks, then there needs to be a little creative incentive behind movies like this.

The commencing scene is a flashback, at the heart of the Vietnam War when pals Col. Hays Hodges (Tommy Lee Jones) and Col. Terry Childers (Samuel L. Jackson) were in those perilous jungles fighting for the Americans. To save the life of his good friend, Childers sacrifices the life of a POW, whom he shoots without thinking twice. The purpose of such a scene is not meant to simply establish the friendship between the two main characters, but to also underscore the film’s persevering theme: human nature is imperfect, even though our actions might seem heroic.

28 years pass. Since those days, both men have moved on with their lives; Hodges now retires to fly-fishing, and Childers remains in the service. When he and his troops are called into Yemen territory so they can retrieve the American Ambassador (Ben Kingsley) and his family from a violent protest, a horde of rioters and snipers kill three marines and wound another. Childers orders his men to fire on the crowd (which also consists of women and children)—an act which is met with protest and condemned worldwide afterwards. The pressure of pinning the deaths on someone results in the American government charging Childers with over 80 counts of murder, claiming that he abused the authority of his position.

That’s not the only thing that’s abused here. Part war flick and part courtroom drama, “Rules Of Engagement” is like seeing two movies fight each other to see which is more ridiculous. On one side you have a series of battle scenes that leap out of nowhere with excessive violence and unnecessary gore; on the other, you have characters who engage in all sorts of arguments in the courtroom that resemble those of “A Few Good Men.” Which is the worse scenario? The material that takes place in the courtroom, honestly; aside from being predictable and stale, the individuals involved in the cast are so transparent and uninspired that, even with great actors filling their shoes, are never plausible. The movie’s antagonist, Security Advisor William Sokal, is the most irritating; in order to use Childers as the scapegoat for this incident, he winds up destroying evidence that could make a significant change in the outcome of the trial (and potentially shorten an overlong movie with nowhere else to go).

Likewise, Jones and Jackson lack the simplest ambition—their screen personas stare at each other and blurt out the dialogue without a shred of intellect, using parley that is, in itself, nothing to jump up and down about either. Instead of juicy phrases or even catchy remarks blasting out of their mouths, what we get are lines that could put “Armageddon” back into the spotlight. The one good line in the whole picture comes from Tommy Lee Jones, who, upon being asked to represent his good friend, insists “I’m a good enough lawyer to know you need a better lawyer than me.”

Giving a twist to the knife in our sides is the movie’s bogus climax, which even fails to resolve the core issue. After we slog through a relentless investigation and numerous courtroom scenes, there is a brief resolution, then closing words on screen telling us how things turn out in the end for the characters and the circumstances they have been put through. That’s it? This is what we came for? Amazing how a movie so long can feel so curiously unfinished.

The film was directed by William Friedkin, who made both “The French Connection” and “The Exorcist” back in the days when he was on Hollywood’s “A”-List. What happened to those days, anyway? “The French Connection” was a tense, exciting thriller that never let go of you, and “The Exorcist” remains to this day the most terrifying picture ever made. “Rules Of Engagement” is almost the complete opposite: it isn’t thrilling, it doesn’t grasp us and it lacks every bit of tension. In its own way, though, the movie is quite terrifying.