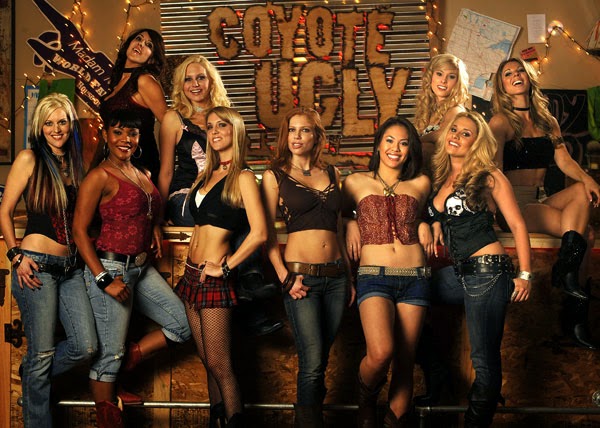 The premise is the kind that bored male teenagers write on diner napkins—you know, the ones in which they dream of seeing attractive women parade themselves around like cheap and easy good times. It stars relative newcomer Piper Perabo (who was only just seen in “The Adventures Of Rocky And Bullwinkle”) as Violet Sanford, an aspiring songwriter who leaves the home of her loving father and goes to New York looking for creative inspiration (not to mention recognition). When she underestimates the time it takes to get discovered, she acquires a job at the local bar called Coyote Ugly, where women dance atop bars, gyrate their pelvises, taunt the male customers with all kinds of low-cut gear and throw wet drinks over themselves to heighten the sexual tension. Violet, at first, feels like she is suffering from some kind of “stage fright DNA” (in a brief instance, the movie notes that her mother had a similar problem when she was alive), but after she grows comfortable with the situation, doesn’t seem to afraid to strut her stuff. It is this energy that attracts the young fry cook Kevin O’Donnell (Adam Garcia) to her, but after a few dates, he realizes that getting involved with a busy barkeep is not the best idea. Violet then takes all of these situations into consideration and finds herself on a moral journey, determining what exactly she wants her life to mean in the end (I guess).

These are only a few of the details that drive the ludicrous and shapeless plot of “Coyote Ugly,” which resets its course so often that there’s no telling what attempt it will make next. The movie is under the disillusion that the plot is grounded, though, and feels free to juggle around its characters like balls of string. It does most of its work with Violet, who in one scene is flustered over her failure to match song-writing with lyrics, but is then inspired by hearing the tempo of nearby R&B tunes. But she’s not thought out carefully in the script, and ultimately, her efforts as a songstress end in a tune that could easily be sung by any generic pop star in the vein of Britney Spears.

The only real positive exposure illuminated from the girls belongs to Coyote Ugly’s radical boss Lil (Maria Bello), who keeps close tabs on her barkeeps and threatens them with layoffs if they don’t do their job precisely (her attitude is delivered with precision and her energy right on target). Others—like Rachel and Zoe, two of Violet’s co-workers—serve only as window displays for a marketing strategy to reel in all sorts of testosterone-driven male teenagers, and have little to do with the plot or its consequence.

For what it’s worth, the movie’s sense of style at times shines through. Particularly during the racy bar sequences, director David McNally focuses a highly-concentrated beam of energy into the editing, carefully clipping scenes together so that clarity is guaranteed alongside the complex, MTV-style cinematography. Ultimately, however, McNally’s problem is that he has too much faith in the hopeless plot, and that interferes with his technical observations, eventually letting the distorted narrative drain out the sparse positive energy. The end result a long, painful and pointless endeavor that serves little purpose other than to reel in a few extra dollars for the folks over at Disney.