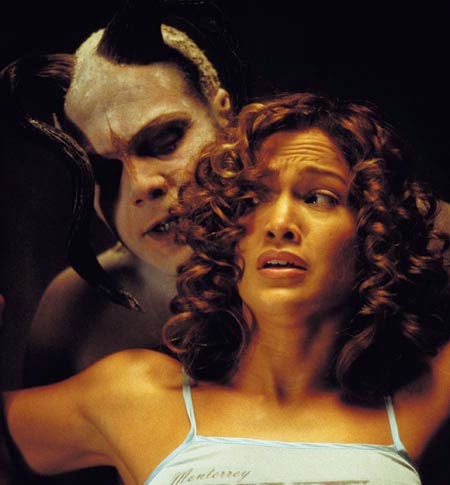 On this particular occasion, the end result, at least for me, is an eccentric but spellbinding serial killer film; an “eXistenZ” of elaborate special effects and production values, with visual manifestations that leave the viewer both captivated and haunted. Steeped in gorgeous and vibrant texture, with occasional shades of gray helping to underscore the nightmarish plight that keeps the characters penetrated, “The Cell” is a brilliant candidate for one of the year’s best movies.

Another reason for a positive recommendation; it’s story is echoed through Jonathan Demme’s masterpiece “The Silence Of The Lambs.” The film stars Jennifer Lopez as Catharine Deane, a researcher (although her exact career isn’t really revealed) who has been participating in one of the newest neurological discoveries: a machine that allows people to journey into the minds of anyone they choose to hook up. The purpose: Catharine has been closely studying a child in a coma for the last few months, and feels that, with the right amount of determination, can get into the kid’s brain, earn his trust, and guide him out of his catatonic state. Just as the attempts are failing, though, Catharine and her team are contacted by the police, who want to use this technology to get inside the mind of a comatose serial killer so they can find out where he stashed his latest captor before it’s too late.

The psychopath is played by Vincent D’Onofrio, in one of the most interesting serial killer roles of the last five years. On screen, little is shared of his life (other than that he is an apparent schizophrenic who takes pills so rapidly he might as well inhale them through a straw), but when Catharine accepts the request of the FBI and decides to go under and retrieve information from his secluded mind, we learn something about his disfigured persona more terrifying than anyone could have ever imagined. Scientists for years have wondered what it would be like to see the world from a mass murderer’s point of view; in ways, they get the opportunity with “The Cell.”

The movie is a highly-stylized platform for some of the most intriguing and abstract special effects ever attempted in film. There is a moment, for example, when Catharine is knocked unconscious in a corridor filled with dancing female corpses, and awaked in a large throne room domiciled by a disturbing figure. As he comes down the staircase, his long fluorescent cape slides horizontally across the walls, looking at first as if it had been pinned up around every wall in the room. The rippling cape effects feel reminiscent of “Spawn,” but the overall execution (which is admittedly better seen than described) is one of the most unique I have ever seen. If the movie is anything like “The Matrix” in terms of cinematic inspiration, than I can already see this particular moment serving as a ruse for laughs in “Scary Movie 2.”

I mentioned the sci-fi thriller “eXistenZ” earlier because both movies have similar production values. Like David Cronenberg, director Tarsem Singn seems like the kind of filmmaker who is in love with elements out of the ordinary, and with “The Cell” (his directorial debut in cinema), he isn’t afraid to take chances, letting loose at the opportune moments and then seizing back just before our hearts leap up into our throats. The script, written by Mark Protosevich, is a firm piece of work in its own right, too, using three or four traditional movie formulas without dwelling on the clichés and just basically concentrating on tension and a thorough plot line. In the age when movies like “The Sixth Sense” and “Hollow Man” disrupt their visual elegance with crummy stories and others like “Mission To Mars” and “Pitch Black” delude themselves with indistinctive styles, “The Cell” is an amazing blend of thrills, chills, and genuine artistic beauty.