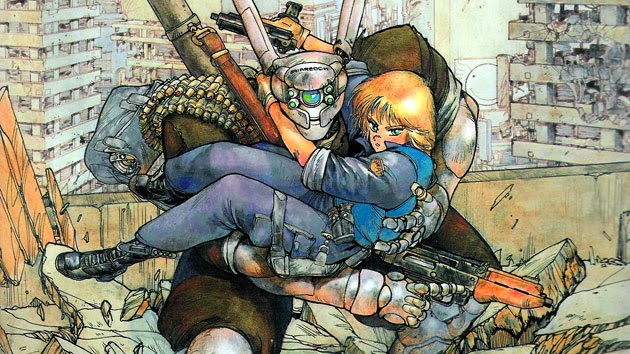 “Appleseed,” one of the latest releases from Manga Video, the lead distributor of anime in the states, is a prime example of why you shouldn’t judge a book by its cover. Granted, it’s choppy and simple as a design, with characters inked underneath hard edges, but little of that matters when you compare it to the compelling premise. In it, mankind has suffered a great relapse in population, resulting from the disasters of World War III. To preserve what remained of their civilization, diffused governments from around the world constructed a large metropolis called Olympus, which was, at the time, considered a utopia. There, citizens are showered with equality, wealth, employment, and are even given the opportunity to live in specifically manipulated climates. Unfortunately, such elements are what make some humans feel like they’ve been imprisoned in a plastic society, and in the plot’s turning point, a terrorist named A.J. Sebastian conspires to bring the city down and restore man’s independence, even though the obstacles against him are numerous.

The city is not ruled by humans, but rather “Biodroids,” which are described as half human/half machine, programmed to live specifically in a manipulated environment and serve mankind down to the last aspect. But biodroids don’t appear to be doing that at all; in fact, the city’s Management Director, Athena, is a capitalist who cares little about human beings, other than using them keep the city stable and intact. She enlists the help of two members of ESWAT, the primary defense system of Olympus, to track down the terrorist known as Sebastian and eliminate him, along with anyone else who supports his cause. But should these two humans even follow those orders, especially when they agree when one character notes that they “no longer live, only exist?”

“Appleseed” is being released alongside another anime film called “Black Jack,” which, like this one, centers on an individual’s somewhat-questionable attempts at expanding humanity’s vitality. But whereas the latter is blanketed in very vivid storytelling and characters, certain qualities about this release prevent it from being the great product it could have been – a sad fate for such a terrific premise. For one thing, many of the story’s central characters are greatly underwritten, sometimes serving merely as vehicles to transport us from one plot point to another. The movie is also far too short, clocking in at 71 minutes (including the credits), preventing us from seriously getting into this universe. And then there’s the biodroids themselves, which are an intriguing concept but suffer because the movie never makes a clear visual distinction between them and ordinary humans. When someone walks on screen, sometimes we aren’t sure of who they even are or who they’re working for.

But what is lacking in those areas is more than compensated for by a highly fun-filled story, which is established on the same sort of groundwork that informs “Dark City” and “The Matrix,” if you think about it. “Appleseed” is not one of those great anime projects like “Princess Mononoke” or “X,” but for those who would just like to try and gradually break into the genre, it serves as a fine starting point.

Directed by Kazuyoshi Katayama; Based on the story by Masamune Shirow