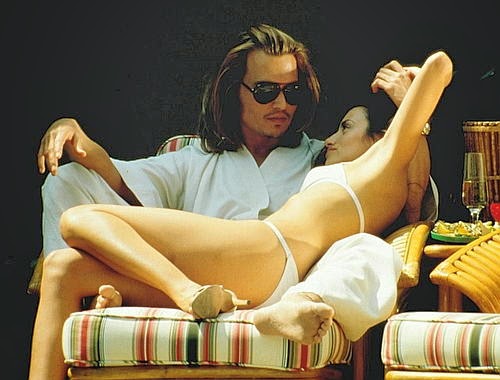 Take the situation of George Jung, for instance (but more than just at face value). He, played here by Johnny Depp, is the central focus of “Blow,” a movie (based on a biography by Bruce Porter) about how someone’s innocence and ambition can be undermined by giving in to an easy but unlawful practice all for the sake of a few dollars. Raised in 1950s Massachusetts by a struggling financial family (consisting of a hardworking plumber for a father and a shrewd, distant mother), Jung sought out to reverse the trend that his family had previously established, and decided, in order to do so, he’d need to be away from home. His search took him to Manhattan Beach, California, in 1968, where, with his friend Tuna (Ethan Suplee), he grew accustomed to the carefree, rebellious lifestyle of the 60s. Eventually, he made contact with Derek Foreal (Paul Reubens), a mischievous hairdresser who opened him up to the immense financial securities of selling drugs.

Circumstances upon circumstances took him to the top of his game, then to prison, and then eventually to Pablo Escobar, an infamous Colombian drug cartel ringleader who served as Jung’s supplier of cocaine for the US for many years. It is said by many, in fact, that Jung’s connections with Escobar may have been responsible for more than 85 percent of the cocaine that came into the states throughout the 70s.

Where is Jung now, you ask? Serving a prison sentence, of course, and one in which parole isn’t even an eligibility until the year 2014. Once again, what has been argued for years in motion pictures about the involvement in illegal drugs rings true here, and the fact that it’s all based on a true story this time adds another layer of reality to the already-complicated subject matter.

The movie is a slickly photographed and edited piece of work, almost to the stylish level of a Quentin Tarrantino endeavor. But that’s not the immediate attention-grabber here. What works best in “Blow” is how well the cast embodies the characters, and how elaborately the plot uses them. Depp is sharp and energetic as George Jung, and yet doesn’t dwell so heavily into the material that he tries to turn our interest into sympathy for him. Paul Reubens, AKA Pee-Wee Herman, plays the maniacal hairdresser Derek so alarmingly well, you almost wish he was given more screen time. The biggest impact of the movie, perhaps, is in the performance by Jordi Molla, who plays a Colombian named Diego that makes the acquaintance of Jung while he is in prison on a pot bust. Molla walks and talks like a serious Hollywood actor: someone who energetically embodies his role, even though the script doesn’t exactly provide it with the most complexity. Don’t be too surprised to hear his name a little more in the near future.

The director of “Blow” is Ted Demme, who had some commercial success two years ago with the Martin Lawrence/Eddie Murphy comedy “Life,” but has been a fairly low-key both before and after. Here, he and his writers have crafted a very visual, observant, thought-provoking and challenging film, and yet one that, like many in its class, feels rather generic and sappy at times. Aside from borrowing clichés from movies like “Boogie Nights” and “Goodfellas,” the movie also lacks a substantial sense of rhythm; it presents itself as a serious biopic the majority of the time, but then jumps around between drama and sentiment frequently during the last half, and then has the nerve to use some mild comedy to fill in the gaps. Ironically, one of the biggest distractions is actually Depp’s sunglasses, which act as a shield between his persona and the audience, preventing them from fully exploring his charming complexity. Sure, the way he walks, talks and acts could be considered enough material to realize what type of character he is, but is it too much to ask to actually see his eyes a little more?

But “Blow” doesn’t so greatly suffer from these quibbles that the end result is a flop. This is actually one of the year’s first effective endeavors, highlighted by so many interesting details and performances that, even for those who have grown tired of the many recent drug issues debated in cinema, will surely provoke long and probing discussions amongst moviegoers. It’s hardly the achievement of “Requiem For A Dream” or “Traffic,” but then again, when does lightning ever strike in the same place twice, let alone three times?