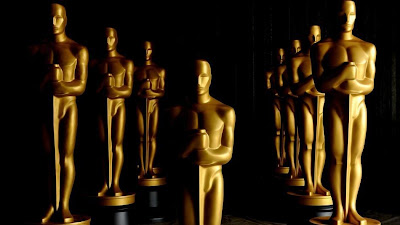 Any avid moviegoer will tell you how the attempt to make predictions of Oscar victors has become a coveted American pastime, but few of them will be able to express in words how addictive, frustrating and time consuming it actually is. That concept has never been more apparent than this year, as a careful look over the 74th Academy Awards voting ballot is an instant invitation to hours of piercing headaches.

The elaborate guessing game that tends to befuddle even the most successful predictors is even more of an obstacle this time around than it has been in years past. In recent memory, viewers, critics and analysts could at least depend on "weak spots" (or nominees who seemed susceptible to being forgotten) in major categories to help narrow their predictions down. Now, in a year when five seemingly invulnerable pictures have been grouped in the ceremony's most coveted category, the opportunity to close the gap has become much more difficult.

Time, fortunately, has given some of us the opportunity to make more educated guesses (thanks in part to events like the Screen Actors Guild). The list of predictions provided below argue for and against major contenders this year, and though the outlook still remains clouded, it should at least be noted that, for the first time since the nominations were announced, the choices are becoming somewhat clearer.

BEST PICTURE
The hardest category to assume anything on is also the most significant one of them all. Best Picture has in its contest five solid, well-respected and seemingly invulnerable choices, each of which has also received significant attention in other ways already. "A Beautiful Mind" and "Moulin Rouge!" are the major Golden Globe winners; "In The Bedroom" has been the victor with critics circles; "Gosford Park," the least-known of the nominees, recently sprung back into the tight competition by winning the Screen Actors Guild award for Best Ensemble; and "The Lord of the Rings: The Fellowship of the Ring," in addition to being the biggest moneymaker of the five and the audience favorite, also won the AFI's first ever Best Film of the Year award. Where does it go from here?

In terms of exposure, both "In The Bedroom" and "Gosford Park" have been pushed the most during Oscar season. Alas, this notion could prove fatal for both films. The first mentioned carries with it the curse of being distributed by Miramax Films, who in the past have marketed and pushed their contenders so immensely that the media has speculated whether the studio tries to buy its Oscar wins (and the upset caused by 1998's "Shakespeare In Love" is definite proof). "Gosford Park," on the flip side, has been marketed moderately well. However, the general consensus has been that director Robert Altman is the real winner here, not the movie itself. The Academy will probably hand the 77-year-old filmmaker his much-deserved trophy and forget about the film thereafter.

The overall assumption thus far has been that the final race is between "A Beautiful Mind" and " The Lord of the Rings." But not so fast. Although Ron Howard's movie about a schizophrenic mathematician fits the mold of the Academy's typical winners--schmaltzy but uplifting character drama--it recently has endured a backlash because people have called into question the accuracy of the story (remember how "The Hurricane" suffered from this?). Peter Jackson's adaptation of the Tolkien fable, meanwhile, is credited with having the most nominations of the night--a big plus--but the Academy has not once given its Best Picture honors to anything science fiction or fantasy. Who says they'll start now?

This leaves us with "Moulin Rouge!", a film that, despite being released in the first half of 2001, has practically no attributes working against it. The critics loved it. The Academy responded by nominating it eight times. The hype has escalated ever since the film hit video store shelves four months ago. And above all else, the movie is groundbreaking cinema.

BEST DIRECTOR
Ron Howard won the Director's Guild Award recently for "A Beautiful Mind." Statistics have proven that very few times in the past has the DGA winner not gone on to win the Academy Award as well. However, it should be noted that one of those very few upsets occurred last year, when Steven Soderbergh surprised many by beating out "Crouching Tiger, Hidden Dragon" director Ang Lee as the Oscar winner.

Such a revelation only reminds us that even the most assured contenders can be vulnerable to upsets, and that factor should be considered this year as well. Howard has strong support in this category thanks to his DGA win, but nominee Robert Altman, a famous director who has been in the business for over 50 years, has not once won an Academy Award (although he's been nominated four times before) and is the sentimental favorite. Plus, the fact that he's a much older and more appreciated director than Howard is also beneficial here.

BEST ACTOR
Like the movie he stars in, Russell Crowe has been considered a front-runner ever since the nominations were announced in early February. But viewers who don't suffer from some kind of "Memento"-inspired illness will remember that 1) he won an Oscar last year, and 2) his erratic behavior towards a producer at the British Academy Awards recently turned off a lot of his backing support. Those hoping for the Australian hunk to make a repeat appearance at the podium this year might be sorely disappointed.

After Crowe has been removed from consideration, what remains in this category are two new faces to the Academy Awards (Tom Wilkinson and Will Smith) and two well-known but overlooked actors (Sean Penn and Denzel Washington). If hype has a lot to do with the way award shows like this play out, then Smith and Wilkinson should consider their nominations their awards ("In The Bedroom" is credited more for Sissy Spacek, and "Ali" was a box office dud). Ditto for Sean Penn, whose performance as a retarded father seeking custody of his eight-year-old daughter was hyped early but gradually fell by the wayside.

This means that Denzel Washington, who was forgotten two years ago for his marvelous performance in "The Hurricane," is the apparent choice here. The fact that his performance in "Training Day" was very unconventional for the actor won't hurt his chances, either.

BEST ACTRESS
Up until the Screen Actors Guild Awards, Sissy Spacek was the odds-on-favorite here for her performance in "In The Bedroom." But a surprise win by Halle Berry on Sunday for her role in "Monster's Ball" began to restructure many of our original impressions of the category; if an under-apreciated actress in an under-apreciated movie can overcome the odds, who's to say she couldn't do the same at the Oscars?

Then again, who's to say that someone else might simply shut both of them out? Stranger things have happened, after all. Spacek and Berry are tight contenders here, but the race between them is perhaps too close to result in a win for either one of them. Something should be said for the gradually increasing momentum for Nicole Kidman, who was not only effective in her nominated performance for "Moulin Rouge!", but also in last summer's "The Others" as well. Given the messy tug-of-war going on between the two leading contenders, it shouldn't be much of a surprise to assume Kidman can slip past both of them.

As for Judi Dench and Renee Zellweger, neither of them pose much of a threat. Dench recently won an award for playing Queen Elizabeth I in "Shakespeare In Love," and Zellweger is the dark horse of the category, the nominee that probably snuck into final nominations by a mere hair.

BEST SUPPORTING ACTOR
First things first: John Voight ("Ali") and Ethan Hawke ("Training Day") are complete dark horses who stood little chance of victory to begin with. Forget about 'em. Now consider Jim Broadbent and Ben Kingsley, two highly acclaimed actors who appeared as characters this year far beyond their previous reaches. Do you even remember the names of the movies they starred in?

Ian McKellen is the only sure guess here. Not only did he win the SAG recently for the same role, but he's also been greatly acknowledged in the recent past for his work in movies like "Gods and Monsters" (which, by the way, resulted in an Oscar nomination as well). Plus, since "The Lord of the Rings" won't see any wins in other major categories, the Academy will feel they've honored it enough by giving him this one.

BEST SUPPORTING ACTRESS
The two ladies of "Gosford Park" nominated in this category have been very vocal about how the Academy Awards are overestimated and do nothing to help boost a sagging career, so cross them off the list; no one, after all wants to honor an ungrateful actor. Marisa Tomei, meanwhile, already has Hollywood's most coveted trophy on her mantle, and Kate Winslet, though nominated a couple of times before at the Oscars, still hasn't found the kind of role that Academy members feel obliged to recognize. That leaves Jennifer Connelly, a woman who has been acting since she was a teen, is generally effective in "A Beautiful Mind," and seems like the kind of all-around nice girl that tends to win in this category.