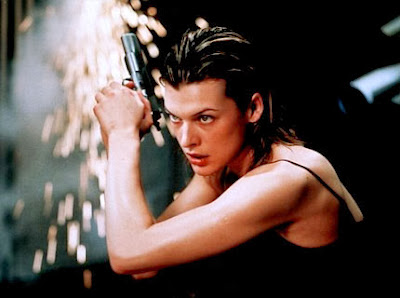 The adaptations of popular video games to major motion pictures is one of the biggest transitional curses of the modern cinema, and effort that is incessantly crushed by the fact that that screenwriters are too afraid to expand on ideas that the games themselves barely scratch the surface of. Consider last summer's ambitious retelling of the "Tomb Raider" computer game craze; it was flashy, ambitious and sometimes amusing, but the small plot, as with the source material itself, was simply an excuse to throw us in to countless sequences in which creatures are shot up and the hero of the story moves on to the next level, waiting for new dangers. At least with video games, we at least have control of the action. When it comes to the cinematic equivalent, it feels like we're simply observers of players who visit the same levels over and over again without making any progress.

The latest installment (and immediate failure) of this ill-fated transition is "Resident Evil," which is based on a Catchcom video game that is among one of the biggest sellers of the Playstation console. The movie is loud, fragmented, transparent and dimwitted, lacking so much focus that the characters spend most of their time running or crawling through passageways, ever so often firing a bullet to keep the opposition at bay. And the picture's not even brave enough to give us the shoestring premise upfront; it waits until the second act to reveal the details, forcing us to endure the opening half hour in a cloud of immense confusion and frustration. Just when we think we've finally figured out the big mystery, however, a cheap ploy intended to stimulate the possibility for future sequels is quickly yanked out onto the screen, destroying any hope for closure other than the fact that the movie at least ends before the 2-hour mark.

As the picture opens, an unidentified figure in laboratory gear stocks some kind of briefcase with large spiral tubes containing blue and green liquids. As he leaves the building, he tosses one of the tubes up in the air, which results in its breaking and, needless to say, the unleashing of the materials inside. Dogs in cages begin to bark. Fumes from the liquid escape into the ventilation system. And soon, the laboratory's computer system is locking down, trapping everyone inside where fatal things begin to happen (deadly gasses being emitted into the air, elevator cables becoming disconnected, sealed laboratory rooms being flooded, etc.). No one knows what is causing this computer system to act in such a hysterical way, but it's not as if they have time to do anything about it.

Now flash to the next scene, where we see Milla Jovovich, in all her nakedness, lying unconscious in the shower with a curtain wrapped around her body. When she wakes, she has no recollection of where or who she is, although it doesn't take long before fragmented memories begin to enter her mind. Abruptly, she and a police officer on the grounds of her elaborate estate are captured by menacing military-like figures, who escort them into the underground where, on a train system that leads directly into this elaborate underground laboratory (or the Hive, as it is more commonly known as), she is told that she used to be a security guard in this well-hidden building, and has been recruited to help determine why the computer system there locked in and killed all the lab's inhabitants. As is the case with any kind of science fiction horror film though, the truth itself is a lot more hazardous than anyone initially suspects ("shut me down, and you will all die," the computer insists to the unsuspecting people).

But what trick does the plot have up its sleeve to deliver on that promise? Nothing more than zombies. Yep, you read correctly: brain-dead, foul-smelling, limp-walking and moaning zombies, who have no function outside of their "need to feed" on living human flesh. Later, as we are told ever-so-suddenly, the substance that originally escaped into the Hive's ventilation systems is actually a deadly man-made virus that allows the human mind to endure even after the body has died. Fearing that the highly contagious disease could find a way outside of the laboratory, the computer was forced to seal off the exits and destroy the inhabitants. But now the new arrivals are threatened to exposure of this deadly disease, and unless they are able to escape the deadly compound before the lab is resealed by the computer, they will never make it out alive. That, of course, is their minor task. The bigger problem at hand is the fact that, while the computer system was briefly shut down, one of the secret lab's first and most deadly experiments managed to escape its holding pin, and is now running amok within the Hive looking for living human DNA to feast on.

This all sounds complex to a certain degree, but don't be fooled by anything "Resident Evil" has to offer. This is nothing more than an endless festival of blood and gore, masquerading under the guise of a gritty modern science fiction fable. And even for a film loaded with graphic imagery, it is rather a tame endeavor, especially since the movie's director, Paul Anderson (no, not the man behind "Magnolia"), also did the incredibly morbid "Event Horizon" a few years back. What's worse, the little pieces of story provided in the premise don't even seem to make much sense, even for a genre as audacious as this one. Why, for example, would the computer system not hesitate in slaughtering uninfected intruders but wait in doing anything to those who have potentially been tainted with the virus? Why did the system even bother killing the inhabitants when it knew that the dead would simply revive and become zombies? And moreover, what is the point of a big-name corporation trying to manufacture such a seemingly-invulnerable disease to begin with? None of these questions are even considered to be answered by the plot, and it doesn't seem likely that any number of sequels of this material will bring any more closure to the conflicts at hand.

The biggest question of them all: what was the point of even making the movie to begin with? I'm at a loss for words. What's ultimately more disheartening here is that, unlike other video game adaptations, "Resident Evil" at least shows evidence of once being a good idea for a film (it not only contains some intriguing visual ideas, like the use of washed-out flashbacks, but a brilliantly eerie musical score, composed by Marilyn Manson, that could have offered the necessary tension for any respectable sci-fi horror outing). But alas, what we're delivered here is nothing more than the latest failed attempt to capture the experience of video gaming successfully in the movie theater. "Resident Evil" is not only a botch job, but a pathetic and mundane one as well.