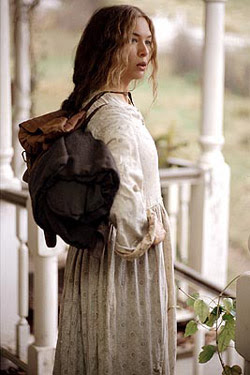 This is essentially the backbone that drives "Cold Mountain," a film that works, more or less, simply for being about real characters and how they cope with situations. Trying to nail down a specific classification of its story, in fact, is an agonizing prospect because the plot exists only as a driving force, not as a foundation. This movie could be considered a love story, a war epic, a character study or just a plain old fashioned tale of survival; whatever the answer, the film doesn't make it directly known. And while that notion may keep the film itself from being good enough to warrant all of its recent praise, that does not dismiss the fact that it's a solid and observant work regardless, driven by the very notion that characters are being genuine with us on screen through all sorts of ordeals instead of trying to pass off as dramatized versions of their respective archetypes.

The plot, at least at the introductory stage, deals with the bond between two citizens of Cold Mountain, a rural mountain town in North Carolina where everyone seems to know everyone else even when they don't really want to. Ada Monroe (Nicole Kidman) is a new arrival to the peaceful place, and she makes her first connection there with Inman (Jude Law), a carpenter and farm worker whose deep eyes say enough in long glances to keep physical conversation between the two to a minimum. Their infatuation is instantaneous, their attraction unmistakable. They never really learn enough about one another to warrant much of a connection, but when Inman is whisked away to fight for the south in the ever-chaotic Civil War, they each succumb to a brief moment of passion powerful enough to drive them for the rest of the movie. "I will wait for you," she tells him in a whisper, and we instantly gather that he's ready to come home even before he has stepped onto the battle fields.

Inevitably, the screenplay demands both characters to spend the majority of the movie apart, and during that time it supplies them with hordes of acquaintances and enemies to pass the time (and when I say "hordes," I mean that in every sense of the word). The most notable among them is Ruby Thewes (Renee Zellweger), a farm-hand who is hired by Ada after her father dies to help tend the farm before she loses it to a greedy land owner scouring the area looking to reclaim former properties. Ruby is colorful, vivacious and zealous down to the very dialogue she utters, and Renee Zellweger delivers her with such a striking presence that it nearly overshadows everyone else around her. She isn't just spouting out one-liners or vivid comparisons for the sake of comic relief, though—it's almost as if she is directly channeling Hattie McDaniel's grand performance in "Gone With the Wind" and then making it her own. The work is more than enough to redeem her for a certain performance in a highly overrated 2002 Rob Marshall musical film.

There are others, including a cleverly-disguised pimp played by Giovanni Ribisi who uses his brothel as some twisted form of entrapment, and a married preacher played by Philip Seymour Hoffman whom Inman catches just as he is about to drown the black woman he is having an affair with. Oddly enough, though, the excessive use of supporting players doesn't bog down the audience's fascination; in fact, it enhances the desire to watch more, as the love story between the two main players is of the least importance during the film's middle patch. Furthermore, the journeys and experiences that either Inman and Ada experience during their slow journey back to one another results in some of the best cinematography seen in a war epic in some time. The movie captures the beauty of its rustic landscapes, but it also doesn't overemphasize it, either; after all, no one said that the authenticity of your setting depends on you making ugly things seem less uglier than they really are.

While the movie isn't focused on being a "who's-who?" of ensemble actors, it's contemplating the significant moral dilemmas of its era. Of course, such an undertaking has been exhausted countless times in the genre already, and that's where "Cold Mountain" makes its biggest mistake. It lacks distinction on an internal level, as none of the issues it brings up add anything new to the argument about the war or its effect on people. To top it all off, the movie staggers these messages in a way that is almost too eccentric for its own good. The movie isn't even always linear—-in fact, the big war sequence happens early on in the film before the central premise is even established. The structure isn't confusing, but it's dissonant and hectic and rather pointless.

If writer Charles Frazier's famous novel genuinely adopts ideas from other things besides "Gone With the Wind," then the primary source is Homer's "The Odyssey," which, in a nearly identical manner, deals with one man's journey from war to home and all the bizarre side adventures he has along the way. The screen transition doesn't always come off as fluid as it should (perhaps because certain elements in the movie are treated in a tone that is either too lighthearted or too absurd for the tough subject matter), but in the end we aren't really paying enough attention to the film's odd structure to make it much of a distraction. This is the kind of movie you watch for all the reasons that continue to make the essence of Civil War films so appealing in the first place—the magnetism between characters, their dialogue, their mannerisms, and the atmosphere the story throws them into. It all works in the end, although not enough to be as great as the studio would like you to believe it is.