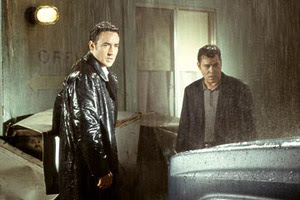 Though it makes no specific claims to be a housing unit for these themes (at least from an outside perspective), James Mangold's "Identity" is very much a puzzle movie caged by these sentiments (as hinted by the enigmatic title). Indeed, what is the significance of identity for a group of unrelated people who wander into the same motel during a stormy night? What brings them together during a cold stormy night out in the middle of the desert? The great thing about a movie like this is that it only reveals knowledge when it expects its own characters to be on the same page; if they are out of the loop, we are stuck right alongside them. And perhaps that's what identity itself is all about, too: learn things as they come to you rather than have everything implanted in your head ahead of schedule.

Watching the film is one of the most engaging experiences you will have at the movies; it is a taut, intelligent and fresh hybrid of a thriller that has as many effective ideas as a mind has brain cells. It tells a story not unlike the conventional murder mystery on the surface, but one very much stimulating and challenging once its skin has been ripped away. As the movie opens, in fact, there is only the slightest indication that we're dealing with something so unique; characters from varying points and purposes are introduced via brief setup scenes, each of them unrelated and detached, until they all somehow pass into each other's lives via a stretch of wet highway that is abruptly cut off at the end by a washed out bridge. With nowhere to go and nothing to lose, they all find their way into the same area to wait out the storm, unaware of an impending danger that is just about to creep up on them.

The movie's central character is Ed (John Cusack), a cop-turned-limousine-driver who is escorting actress Caroline Suzanne (Rebecca DeMornay) across empty Nevada landscapes when he accidentally runs down a woman standing in the street. She, a wife and mother of a young boy, was only standing there to assist her husband in changing a flat tire, which was acquired earlier in the evening after being ruptured by a shoe lost on the highway earlier still by a hooker named Paris (Amanda Peet) in a rush to get out of town. By some small twist of fate, every one of them winds up at the same shady motel just off the highway, some of them fully aware of the connections that initially brought them together, others not so much. And then there are additional arrivals: a young married couple with a slew of potentially jarring secrets to keep, and a cop (Ray Liotta) who is transporting a death row inmate across state lines for a crucial parole hearing. Once the pieces are in place, however, mayhem ensues, and one-by-one visitors of this creepy establishment begin turning up dead, apparent victims of brutal murder, just as the convicted felon goes missing.

All while these events are correlating, the film jumps back and forth to scenes within a courthouse as lawyers, psychologists and judges await the arrival of a soon-to-be-executed mass murderer. The reason? Dr. Malick (Alfred Molina) believes the sentence of execution on his patient is inhumane; as seriously flawed as he may be, there exists the notion that something inside him can isolate the evil identity that caused so much havoc, and therefore the man should spend his life in a mental hospital. But will the board see it that way considering the extent of the man's crimes? Better yet, will they even get the chance, especially since there seems to be a delay in his inevitable arrival?

The ingenious thing about "Identity" is that it looks and acts like a routine thriller, but almost never amounts to one. Even on the most subtle levels, this is an extraordinarily original endeavor, enriched by little details and oddities that would otherwise be meaningless in standard genre pieces. Alfred Hitchcock would have been especially proud by the script's use of objects, which are utilized in a manner that lays immense importance on their presence in the story (consider, for instance, a slew of key chains with motel room numbers on them that pop up numerically as each person gets mysteriously offed). Similarly, the Hitchcock influence makes itself known in the grand way the movie executes big discoveries; the soundtrack escalates, a look of realization scrawls across the faces of the characters, and the general mood of a scene seems to shift direction simply by the reveal of an important fact.

There is no escape from the conflict once the mind games begins to manifest, but as things begin to unravel, they do so at such an alarming pace that it's a wonder that Michael Cooney's screenplay doesn't get disoriented by all the facts it is juggling. Not only does the story stay on track, but so does most of its character arcs (at least those that manage to last long enough without being slaughtered). Ed and Paris, who turn out to be two of the most important players, are particularly compelling in the way that fear eats away at their exteriors in an effort to reveal their true identities; though we like them from the very beginning, we also see the progression of their behavior as natural given the unusual circumstances surrounding the present conflict, and in that regard the movie does not squander them. They are resources, not vessels for all sorts of panic and anguish, and both Cusack and Peet are stellar in their delivery.

Like 2002's "Frailty," "Identity" gets away with more than just looking like the average crime thriller on the surface. The movie gets under your skin in a way that few others do, by sneaking up on you without the obvious intent of manipulating your expectations. The surprises are always there, yes but they are administered with such forthright conviction that no one is actually thinking about them as major elements of trickery. By the time the experience is over, in fact, we have actually had the rug pulled out from underneath us, our minds torn in two and our stamina tested in ways we seldom have endured all in the same breath. This is the mark of something great brewing in this increasingly stagnant genre, and just as Bill Paxton's 2002 masterpiece re-energized the essence of its namesake, James Mangold's endeavor helps redefine what these kinds of movies are all about.