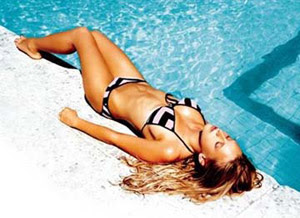 I speak freely about the subject of writing because I, too, am a writer at heart, and that notion makes the effect of seeing François Ozon's probing "Swimming Pool" all the more hard-hitting. This is a wonderful little film about the essence of art and its creator, a surreal portrayal of one woman's eccentric journey in digging herself out of a professional trench and finding new ways to look at herself (and her work) in the process. When the movie opens, she is a corrosive and cynical woman bogged down by tradition, and by the end she is in a sense reborn from what she has learned on her personal trek. The movie is not just about her, it is about us.

The film starts Charlotte Rampling as Sarah Morton, an author who routinely supplies her publisher John Bosload (Charles Dance) with new entries into her ongoing saga of detective stories, a genre that John himself admits is one of his most profitable. But Sarah is starting to show wear from the pattern she has been set up for; even though the public craves the detective stories almost as much as her boss loves publishing them, her heart and soul are yearning to try something else. Though she does not make a direct indication that her present attitude is caused by the lack of literary versatility, Bosload detects a certain amount of anxiety and suggests that she spend some time alone to think about things, specifically in his upstate little home in France that is currently sitting vacant. Realizing she has nothing to lose, she accepts the offer.

At first, Sarah takes a strong liking to her new surroundings—the house is peaceful and its property tranquil and beautiful. But then Julie (Ludivine Sagnier) moves in to the house. She is Bosload's daughter, spoken of early on in the film as a rebellious and free-spirited teenager who goes wherever the wind takes her. Her unexpected arrival puts a rather obvious damper on Sarah's ability to concentrate, and it results in a great amount of hostility between them both, especially when the sexually-liberated teen shows up at all hours of the morning with strange men and engages in loud intercourse just down the hall from Sarah's bedroom. It is a situation that would conceivably drive any struggling writer to mild madness, and yet the rehabilitating writer eventually does not find it a distraction at all. In fact, Julie becomes somewhat of a muse to Sarah, and before she knows it she is writing the teen directly into her latest story.

Not so much a consistently-direct narrative as much as it is a pure character study, "Swimming Pool" is almost always an observant picture, at some points shocking and at others inspiring in the way it builds relationships without squandering them via obvious personal differences. Both Sarah and Julie don't just become acquaintances, they become genuine friends, two people who can learn great things from each other and exercise their talents in ways that would benefit both of them even without it seeming so obvious. The movie anchors these feelings with genuine and affectionate performances from Rampling and Ludivine Sagnier, both of whom are solid in isolated instances but reach electric momentum when they are sharing scenes together. We get the impression at one point that Sarah's growing fascination with Julie may not even have anything to do with her book, but more about a hidden desire to mother. It is made a point early on that the writer's life is sheltered and probably lacks substantial connection with others, so who is to say that the teenager is simply not some sort of stand-in?

The movie's mood is what sells the story, because it is absorbed with drama, suspense, thrill, innocence and spirit—emotions that any good writer will go through in their ongoing pursuit to mold a significant product. Some may see the slow progress of the film's plot as evidence of it being stagnant, but such sentiment only detracts from the parallels the script makes with its target audience. Furthermore, the movie makes a surprising revelation just shortly before the closing shot, and though several have argued that the big reveal undermines much of the material established earlier, its conviction actually adds on another layer of poignancy.

The title of the film may or may not directly reference the object that sits at the center of the yard of this secluded villa, but my guess is that it is simply an object of symbolism, representing the imagination as it waits patiently without disruption until someone comes along and causes ripples on the surface. For those of us with a genuine stake in the material, however "Swimming Pool" is less about ripples and more about splashes; it is provoking and stimulating to a fault, a movie that genuinely seems to care about its messages and the people it involves. When Sarah is finally through with her book, her sense of accomplishment is ours as well.