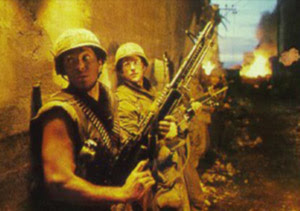 Consider the movie's title for a moment. It supplies not only the necessary military reference to link it to the subject, but also the language for its oblivious participants to utilize in battle. Kubrick's movies always depend on an underlying chord of psychology to drive the narrative, and here he takes that approach to its most stirring; the men who occupy the material are hard, cold metal objects much like the weapons they are carrying, and though their lack of instinct means that they will never quite realize that they are evolving into brainless machines, they will continue fighting for the sake of enduring. They are the real full metal jackets here, and the guns are simply their physical outlets.

In a clever maneuver that allows the audience to endure a wide array of emotional attacks, Kubrick begins his story in a much different way than he ends it. The movie is essentially a housing unit for two shorter features, each functioning on different levels with different messages, connected by one individual and the experiences he brings to the table. In the first story, we meet this Private Joker (Matthew Modine) just as he moves into the first phase of his dedication to the United States army: training. Here, however, he is simply a spectator in the frontal erosion of another one of the film's characters: Private Pyle (Vincent D'Onofrio), a seemingly simple guy who can't begin to understand the wrath of fury and power exhibited by the zealous drill sergeant Hartman (R. Lee Ermey). As a result of this setup, Pyle becomes an alien and an outcast in the very group he is supposed to belong to, tortured incessantly through his superior's violent rhetoric and the physical backlash from his peers. The result is a devastating mental collapse, and a moment in which a confrontation between the sergeant and the private ensues is one of the most eerie and disturbing moments you will ever see on screen; when a shot is fired, you can almost feel the bullet penetrating you.

As the film moves on, Joker becomes the center. And why shouldn't he?—this is a guy whose reclusive and watchful eye in the first half of the picture inevitably gives birth to a persona that is most deserving of its name (did you ever meet a joker without a sense of humor, after all?). The private's lighthearted demeanor in this chapter of the film is seemingly less about detachment, however, and more about optimism; now a reporter for a local Vietnam paper with his watchful eye on the ever-evolving war, there is an obvious desire in him to counteract the events of his previous experience, which appear to pattern themselves and consume all those who have tasted the mayhem of their reality. In other words, Joker is still a human being amongst a crowd of walking weapons, and humor is a tool he uses to keep the infection out of his system.

Of course, it doesn't help matters that he and his entourage of fellow journalists are asked early on to cover the events of more bloodthirsty members of the local brigade. They witness an emotionless gun-toater fire away at innocent Vietnamese from a helicopter overlooking a crop field, and then they watch on as piles of enemy casualties are thrown into a ditch without any sense of regard to their legacy as living beings. Later still, they come upon the Lusthog Squad, fronted by a man called "Animal Mother" (Adam Baldwin), whose smug presence is but an echo of the testosterone-driven attitudes that fuel his team of killing machines. As they gawk victoriously at Vietnamese corpses spread across the remains of a blown-up building, Joker asks disgustingly, "how can you bring yourself to kill innocent children and women?" We know not ourselves any valid reason behind their behavior, but the answer, at least for Pyle himself, becomes clear only through his experience during the film's final climax, in which horrifying reality is revealed during the platoon's tense confrontation with a deadly and determined sniper.

Kubrick once said that film should be "a progression of moods and feelings," that any and all messages or themes should come only after the emotions are established. How fortunate for us that it only takes but a few minutes in both premises to be flooded with reaction; the movie otherwise is packed with messages that are among some of the most powerful and persuasive in context with modern society that have ever been seen in the cinema. Some, perhaps, exist as firm references to the source material it is derived from (a novel called "The Short Timers" by Gustav Hasford), but others keep with the tradition of the Kubrick style and emerge as both impulsive and intuitive rather than devised. There is a sense during many moments that the director's motivation is but a platform for that exact instant; it's as if he is approaching situations cautiously because he expects to be flooded with new ideas just as the old ones are playing out.

The technical aspects of the movie are flawless. Kubrick's camera moves in a style that is synonymous with its setting; there is seldom a slow or steady moment on the battlefield, and when it pauses there is still the feeling that a deadly shot is just waiting to be fired from around every corner or atop every abandoned structure. To intensify that notion, the film is stockpiled with authentic-looking sets for the characters to move around, some of them so battered and bare that you wonder if the technical wizards behind their creation witnessed the war in Vietnam for themselves. To see the movie is to truly live it, and with all its varying levels of soundtrack thumping and lights flashing, the movie warrants a response that is perhaps the closest thing possible on film to witnessing the mayhem firsthand.

The sheer depth and thought that Kubrick put into his screenplay, furthermore, is beyond mind-boggling; no matter how many times the movie can be viewed or analyzed, there is always a new treasure waiting to be discovered. Consider the homage that he makes to Mickey Mouse; though we are instantly familiar with the moment at the end when a troupe of victors break out into a chorus of his theme song, not so obvious until later viewings are his additional references (one of them so slight that it can be easily missed if you're not looking for it). Whether the director is being ironic or trying to make a statement about the Disney legacy with its inclusion is but a minor discussion point; the fact that it exists at all in a movie so drenched with its own macho sadism says a lot about the vast level of intricacy he utilizes in both visual and narrative styles. Other hidden elements, of course, require more thought on part of the viewer, such as the inscription on Animal Mother's helmet which reads "I am Become Death" (historians will tell you that that this is what J. Robert Oppenheimer apparently said after the first atomic bomb was detonated).

During the final shots of the movie, Joker announces, perhaps more freely than with anything he has said before, that "I am alive, and I am not afraid." And so it shows, the seeming presence of that fear wiped away from his eyes for the very first time since the beginning of his mental and physical ordeal. Kubrick's calculated irony is that the realization arrives almost on a schedule, as the complex moral obstacle course has shaped him at first into a cautious observer, then an advocate of peace, then a determined protector, and ultimately a satisfied avenger. Joker has no more fear because his humanity, despite any misguided efforts to preserve it, has finally escaped. There is no longer a place for it. The environment surrounding him refuses to accept otherwise. And the flame-ridden fray waits patiently for its newest killing machine to descend deeper into the nightmare, content with the dehumanization that has kept it alive for so long.