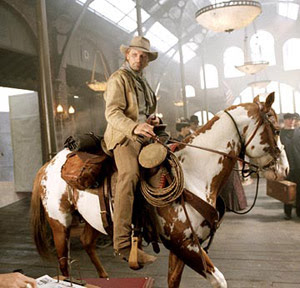 The movie takes a road that is all-too familiar these days when it comes to conflicted heroes in major competitions; it is essentially "Seabiscuit" minus the cheering crowds. Even then, it might have worked had any of its messages about perseverance or dedication came across as genuine, but they never do. Most films about competitions at least utilize all the necessary elements to underscore the personal dilemmas; "Hidalgo" simply plods through the material without offering much in the way of insight on any of its issues, and the result is a film that is generally uninteresting on several cylinders.

Contrary to what most viewers would expect upon hearing the main character's name, Mortensen's Frank Hopkins does not actually come off as an exact representation of the historical figure; in fact, there is the distinct impression here that his role is nothing more than a diluted version of the real person, embellished with all sorts of obligatory character clichés (such as the one that insists all men in the old west spoke in nothing but colorful metaphors). A chord of reality, at least, is instituted in the early story setup—as the movie opens on a cold winter morning, Frank looks into the eyes of his horse, smiles assuredly, and ushers him full-speed down into an open valley. Here, they appear to be clear victors in a race that was probably in favor of more prominent competitors; as they pass a baffled opponent just short of the finish line, there is the sense that none of it was ever supposed to happen, as if Hidalgo is the kind of horse that wins competitions simply by getting lucky. The irony, of course, is that he didn't just win an occasional race across long stretches of land; historically, in fact, he won almost all of the competitions he was ever involved in.

Meanwhile, Hidalgo's emotionally torn tamer Frank is facing new challenges. Half American Native and tired of his association with the Buffalo Bills circus (all of this only according to the movie, mind you), he is approached by two Arabs, who tempt him with the challenge of participating in a great race that stretches thousands of miles in the Bedouins—the "ocean of fire," they call it, a place that has housed an annual horse-racing competition for a thousand years, but rewards only those few who can endure the elements long enough to survive the extensive trek. Instinctively, the script insists Frank take the challenge and sends he and his horse thousands of miles across the globe to participate in said race. But what hope of victory do either of them have in a world that favors more professionally trained riders and stallions?

This could have easily been a platform for all sorts of personal revelations for the Hopkins character, but the movie sidetracks all of that via several supporting characters. One of the most prominent: Sheikh Riyadh (Omar Sharif), a contest admirer whose own sons died competing in past years, and is very fascinated by the western culture that Frank brings to the table with his arrival. There are also several antagonists in the setup, such as Lady Davenport (Louise Lombard), a fellow competitor who isn't about to see her prize-winning Arabian stallion lose the game to a mixed breed like Hidalgo, and Bin Al Reeh (Saïd Taghmaoui), who kidnaps the Sheikh's daughter and thus gives the hero a chance to test out he and his horse's resilience against cutthroat desert dwellers while the race is at a pause. Is there a specific point to either of them in this movie? Not really, other than to keep the audience occupied with subplots while the script tries to decide what it is going to do with the rest of its time. The unfortunate part is that none of these characters are ever very engaging or colorful; they come off more like one-dimensional time fillers rather than significant story players.

In terms of hard story, the screenplay is frustratingly vague; it's as if writer John Fusco put together a skeleton of his premise and simply forgot to add in all the necessary meat before it was time to photograph it. Even though the film stresses the fact that both Hopkins and Hidalgo are mixed breeds competing against all kinds of purebreds, there is not so much as a hint of background provided to stress that notion, and they inevitably become just overlooked side details. In that respect, though, the specifics at least stay true to the essence of the whole film itself; as hard as it tries to be both adventurous and thought-provoking, it is neither of those things. If not for the presence of the stubborn horse, in fact, audiences might have fallen asleep long before a climax was in sight.

Technically, the movie has a few merits. In the attempt to capture the look and feel of its period, the cinematographer puts a great deal of concentration on wide-angled establishing shots that are easily some of the best we've seen in recent years for eastern hemisphere adventures. Having said that, the editing of the film is also sharp and concise; even when the movie utilized the characters for nothing more than chase scenes or violent shoot-outs, you can at least sense plausibility in their visual structure. But who on Earth actually had the nerve to green-light this very transparent screenplay? Whoever takes the blame, let us hope they realize their mistake before they accidentally get their hands on something with a lot more potential next time.