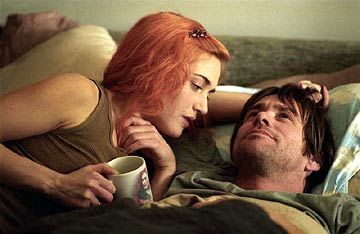 It would be equally wise to approach Kaufman's latest endeavor, "Eternal Sunshine of the Spotless Mind," with those sentiments in hand. Directed by Michael Gondry, who also stood behind the camera for the writer's 2001 project "Human Nature," the movie is a bizarre collection of unusual ideas, tugged along not only by a sweeping sense of the unconventional, but by several traditional values of movie romance as well. With none of Kaufman's quirks in place, the premise echoes at least half of the most well-known movie love stories of the past 50 years; add them back in, and what you have is a seamless and rousing marriage of the conventional and the unique. The result is a wonderful little motion picture that perplexes and baffles the audience almost as easy as it charms them.

The movie stars Jim Carrey as Joel Barish, a man who, in the opening shots, is rushing off to catch a train to work, but is not completely sure he even wants to go to work that day. On impulse, he simply opts to spend his time seeing the countryside and doodling in his sketch book, a decision that, by chance, leads him to meet the quirky and vivacious Clementine (Kate Winslet), a girl whose biggest distinguishing characteristic is her colorful hair. Their first encounter is awkward but inspired; she makes the inevitable approach just as he buries himself into his drawing, and they begin to talk about meaningless little things, even though neither of them seem to be very engaged or interested. They are filled with immense discomfort, and yet the scenes don't present the encounter as forced; even though adverse first impressions are a given, they still eventually fall away and reveal something poignant underneath. No matter how uptight or defensive they may appear, both Clementine and Joel are very infatuated with one another.

Now flash forward a few months or so (the movie doesn't specify time, but we can make educated guesses using the material we're given). Joel is a physical and emotional wreck, the apparent result of Clementine abruptly walking out of his life. The breakup wasn't exactly smooth, either; in fact, as we learn shortly after the realization of a separation, their last encounter consisted of her acting as if she didn't even know who he was. The irony of this situation, though, is that she really didn't know him. Why? According to Joel's well-informed close friends, Joel's darling Clementine went to a clinic and actually had all her memories of him wiped out. Not believing what he is hearing, Joel decides to go off and find this so-called establishment to get the information for himself. When he discovers that she indeed did go through with this bizarre medical therapy, he becomes increasingly interested in its details and decides he should go through the same treatment. In his mind, after all, what's the point of holding onto memories of a loved one when that loved one really doesn't exist anymore?

The script utilizes this interior dilemma as a spring board for all sorts of offbeat and hallucinatory narrative tools. Not the least of which is an alternate reality that takes place entirely in our protagonist's own mind; when he becomes hooked up to the equipment that will wipe out all his memories of Clementine, we see him relive important moments with her just as the machines are removing them from his head. In a visual sense, the approach of this device is brilliant; Kaufman and Gondry succeed in creating the impression that what we are seeing would probably parallel reality if such a scenario were ever possible. What's also striking about their approach is that it repeatedly acknowledges the natural reactions of its main character; as Joel is going through his memory bank and reevaluating everything he and Clementine shared, he decides he doesn't want all of her erased from him, even though the machines currently leave him no choice. Needless to say, observing him as he tries to defeat the therapy by displacing Clementine into alternate memories result in some of the biggest chuckles you will have at a movie all year.

The film also boasts several notable supporting players. Consider Howard (Tom Wilkinson), the doctor responsible for this therapy that erases human memories; rather than being portrayed as a wacky or overzealous man, as most writers would ordinarily do when it comes to characters with inventive ideas, he is comes off as your average guy who is simply doing his job. That may not seem like much in terms of description, but in a movie absorbed by so many unorthodox ideas, it feels refreshing. Further merit is warranted to the character Mary (Kirsten Dunst), a nurse of sorts who, along with her boyfriend/co-worker Stan (Mark Ruffalo), go into a laugh-inducing panic when they witnesses Joel deflecting the memory-erasing therapy and don't know how to get him back on track. These are effective moments because they broaden the scope of the movie's focus; how characters handle their conflicts on the outside edges of the plot is almost as wacky and observant as how the main characters are handling things on the inside.

The movie's final trick is one to be treasured; not only does it reveal and restructure the obvious plot line, it also gives the audience a chance to reevaluate previous scenarios with the new knowledge they have been graciously provided. Of course, it also goes without saying that the final payoff lies not in characters finding new love or moving on from their current situations, but realizing where they have come from and what they have done to arrive at such a point. And the movie's ultimate message, although explained via Kaufman's eccentric tangents, is universal: love is a bond that no machine can break, and no matter how hard you may try to erase the past, it may not make any difference if you and your partner really are destined to be together. Fine and dandy; just add in those signature Kaufman twists, and what you have is one of the most infectious and engrossing films of the year.