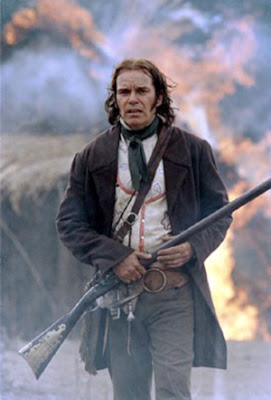 This is the kind of movie in which movement is determined not by plot twists, character interactions or internal revelations, but by the basic impending notion of weapons being drawn and blood being spilled in the dirt—in other words, it's the traditional Hollywood historical blockbuster (think of the ghastly "Pearl Harbor" in a much earlier setting). Of course, the average moviegoer will not be one to make those kinds of proclamations because few are able to detach from the notion of apparent history motivating a premise, no matter how vague. War themes are an even more precious breed, as they numb their viewers into a fallacy that suggests the images of the horrors of combat will automatically result in solid cinematic success. Unfortunately, that is only the case when a movie emerges as genuinely inspired by its premise, and unlike many of the late 20th Century film essays on Vietnam and World War II, today's crop of war epics seem to simply utilize the concept as an audience gimmick. The visual, essentially, has buried the narrative.

Not that "The Alamo" itself would have gone very far otherwise, however. Take away the overwhelming sense of adrenaline, and what we have here is one of the most uninteresting and flat accounts of historical events of our time, a script completely absent of basic interest in its subject matter and fueled by the labored impulse of observing burly white men as they succeed, fail, and then succeed all over again in an extreme physical and political struggle with a small group of antagonists. The testosterone can almost be sliced with a knife. And the saddest thing? The movie doesn't really know how to prepare us for any of it. At one moment we are being introduced to key characters and what motivates them, and at another they're sitting around telling stories, comparing egos and laughing about meaningless things waiting for the action to begin. This is probably the longest beer commercial ever made.

I am, of course, deflecting most attempts here to describe an outline of the plot. Why? Because the movie doesn't have much of one. Based on historical accounts of the great battle over a Texas fortress in the 1830s, the premise involves several famous hillbillies, including Davy Crockett, Sam Houston and Jim Bowie, as they assume control over the Alamo just as hordes of Mexican soldiers, led by a "Western version of Napoleon" named General Antonio Lopez de Santa Ana, are pouring in from the south to reclaim the land which they believe to be theirs. That, needless to say, undermines these Americans and their efforts to make Texas its own republic, and just as those political dilemmas seem to be escalating, the looming threat of bloodshed between both sides of the issue becomes a reality.

The casting of the picture is beyond awkward. Viewers who have been beguiled in the past by the 1960 film version of this story will remember well the idea of that ever-famous roughneck Davy Crockett being embodied by John Wayne, perhaps the most suitable cast for the role; here, they instead will simply be baffled by the notion of the role being taken over by Billy Bob Thornton, whose often quirky and eccentric screen demeanor in the past has made him both unprepared and unsuited for this kind of persona. Ditto to Dennis Quaid, a reasonably okay actor whose recent jobs have left a lot to be desired; his work as the drunken General Houston, in fact, emerges so implausibly here that he actually spends most of the time walking around and fiercely staring at things like he is in serious need of a laxative. And poor Jason Patric isn't even given enough time here to allow his audience to formulate an opinion; first he's brutish, then he's understanding... And then he's a tuberculosis victim who gets locked away in a corner of the Alamo. Gee, how convenient.

I don't know whether to blame the writers or the directors for this. Clearly, none of them have exactly had stellar careers in this industry to begin with; in fact, director Hancock's only other major screen endeavor in the recent years has been the equally-dreadful "The Rookie," and his two co-writers are linked to such dubious endeavors as "Rules of Engagement" and "A Nightmare on Elm Street 5" (although Stephen Gaghan did win an Academy Award, at least, for his work on the screenplay to "Traffic"). Was there a point when any one of them looked at the premise and wondered if it should be more than just a platform for all sorts of meaningless shooting games and shout matches?

The fact that the movie is well photographed only adds to the stress of watching it unfold; you know that the people behind the technical details are working long and hard hours here to give as much depth to the exteriors as possible, but in the end their work is pointless because all they are doing is trying to spice up flat canvases. This is a movie that doesn't deserve their time or effort. Like last year's equally detestable "Master & Commander," "The Alamo" emerges as nothing more than a long and exhausting excursion into the world of macho men as they defeat the enemy and then celebrate by boring the audience to tears.