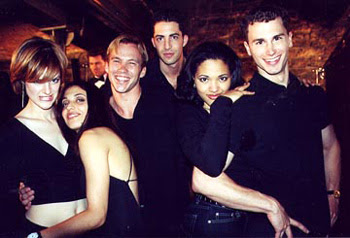 That factor, needless to say, is but a forgotten premise in the current climate of the medium; now we are saturated by ill-conceived projects that assault moral codes, lack relevance, or even displace basic intelligence. This is a sentiment that must have been clear in the mind of filmmaker James Ronald Whitney when he decided to make "Games People Play: New York," an inspired documentary meant to reflect the exterior of reality television while subsequently pushing the boundaries of its substance. Alas, what appears to be a clear direction for Whitney and his ambitious stars ultimately becomes the movie's failure. This sly endeavor is not nearly as brave or uninhibited as it claims; instead, it is a movie that scrambles around with its ideas and never really decides where it wants to take them.

The movie opens with our filmmaker organizing the audition of what he hopes to be a pitch to networks regarding the reality show craze. Hundreds of young and ambitious males and females have answered an ad in a local newspaper requesting completely uninhibited individuals, and as Whitney's two judges, Dr. Gilda Carle and Jim Caruso, sort through the crowd eliminating those who don't meet their standards of physical attractiveness, the rest are crammed into a nearby building. These auditions aren't exactly orthodox for anyone, either; in a nutshell, Whitney asks his competitors to perform three tasks on stage for the camera: 1) show yourself off for a few seconds; 2) reveal a moment in your life that always gets you to cry; and 3) simulate a sex scene with a chosen partner (the movie, at least, wisely gives us this detail without feeling the need to blur out what the MPAA would ordinarily consider NC-17 material). At the end, the director and his judges narrow their selections down to just three men and three women, all of whom over the next few days will compete with each other en route to the grand prize of $10,000.

These are the most effective scenes the film has to offer, revealing personality traits and behaviors that one would ordinarily hear about without necessarily seeing firsthand (one such observant moment: one of the contestants, in competition form, revealing that she was molested by her father when she was a young girl). Unfortunately, it's when the actual game gets underway when the affection for the premise begins to wear thin. Right from the start, our competitors are asked to perform a series of wild tasks in order to earn points which they can take with them into advancing rounds. The men are required to get urine samples from total strangers off the street. The women are asked to acquire a series of answers from other women who are sitting in nearby stalls in public rest rooms. Heck, partners are even asked to go out into the city and bring someone back to their hotel room for a "naked trio." But there is never a hint here that suggests these tasks are anything more than rehearsed stunts, especially during grueling interviews in which the judges uncover countless deep and dark secrets with the contestants. The material seems forced beyond reason, and when the film requires every one of the competitors to share in these painful reveals, it comes off as almost too convenient for its own good.

How the movie resolves these issues is somewhat of a surprise twist, and I shall not reveal it here. Whitney's approach at least consists a unique edge to an already-tired genre of entertainment, but by that point the patience on part of the audience is already too thin to make much of a difference. "Games People Play: New York" certainly has credible ideas and often provokes several jaw-drops, but strip away the uninhibited attitude and what you're left with underneath is not exactly the kind of result that will be refreshing to admirers of the reality game. Let's hope Whitney's upcoming Hollywood version of this concept at least tries to apply its ideas rather than to try and wave them around.