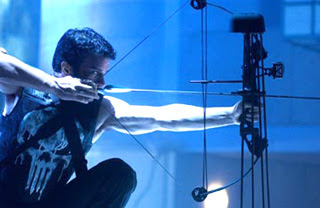 Such sentiments occupy the celluloid quite potently in "The Punisher," a movie that, unlike almost all of its closest relatives, devotes most of its time to explaining characters and their motivations before it sends them headlong into the inevitable "good vs. evil" conflict. The result is a highly satisfying and thoughtful endeavor, a movie that intrigues, builds and then strikes at you in a way that is much more lasting than watching people shoot at each other for two hours. To say that I was both roused and satisfied with the result wouldn't be a thorough assessment, either; unlike "Spider-Man" or "Daredevil," films that leave impressions completely on the basis of stylized action, this is a movie that thinks so deeply about its conflicts and decisions that there are times when the audience itself feels like it has a personal stake in the outcome. This is by far the best film in the reinvigorated sub-genre of comic-book-to-screen conversions.

The movie stars Thomas Jane, of "Deep Blue Sea" and "Dreamcatcher" fame, in the title role of Frank Castle, a highly-respected FBI agent in Tampa who in the opening scenes goes undercover to bust a deal involving the sale of illegal firearms. Unfortunately, his mission results in the accidental death of the young son of Howard Saint (John Travolta), the major crime lord of the area whose loss sends him headlong into the prospect of seeking revenge. But to what extent would someone with this kind of corruption get even? The indication becomes all too clear when Howard's grieving wife Livia (Laura Harring) turns to the people who will track Castle down and demands that they "kill his entire family," setting a series of events into motion that will alter lives and personal ideals in the process.

The screenplay by Michael France and Jonathan Hensleigh is effective in the way it uses events to trigger changes in character personality; as Castle endures the grief over the people he has loved so dearly for so long in his life (most notably his wife and son), he essentially becomes the kind of guy we can only expect him to be: a hard-shelled machine with no sense of vulnerability that has a score to settle. Unlike the events that often set plots involving comic book heroes into motion, however, "The Punisher" is also very unflinching and merciless in its delivery, giving us the trauma straight on instead of trying to lighten it into something less devastating than we hope it could be. Furthermore, France and Hensleigh's writing never once suggests that a life of fighting crime as a polished alter-ego is something to flaunt around or be proud of. This is not someone like Peter Parker whose internal curse is balanced by highly-relished physical attributes, either; he is doing what he is doing simply because it is the only thing he can do given the circumstances, and any possible reward for finishing the job will still never be able to ease the suffering.

Jane's portrayal of the Frank Castle character is quite moving in the way it requires viewers to do more than just stare passively at him on screen. Because he never actually has an emotional breakdown in the film as a response to his family's tragic death, we have to dig deeper to realize the extent of his pain. His mere gaze is enough to create a significant impact; his dark and probing eyes shift in a manner that reveals the rage, the sadness and the subsequent detachment of his situation, no matter how hard he may try to throttle the emotions. Movie vigilantes, of course, are hard to penetrate because there is seldom enough explanation to justify their violent action, but here the actor brings reality to the concept and makes Frank Castle accessible from an outsider's perspective. The performance is easily one of the best we have seen in this genre since Michael Keaton first put on the Batman mask.

Unlike many of its closest relatives, the movie also manages to turn seemingly-ordinary clots of action into something smart and detailed. Rather than have the conflicted hero get his revenge by going in and shooting up the enemies until they are all dead, the screenplay gives Castle the benefit of foresight, which allows him to undermine the opposition using tactics that might ordinarily be seen as elements of mere distraction (example: a scene in which Frank forces two money counters to throw millions of dollars of Saint's cash out of the window of a high-rise and into the crowded streets below, which rattles the antagonist's sense of control). Furthermore, it even supplies him with distractions of his own (such as a friendship he shares with three quirky outsiders played by Ben Foster, John Pinette and Rebecca Romijn-Stamos); this allots the viewers a false sense of security just as the villains are quietly closing in on the protagonist. The scene in which all of this resolves is actually the best one in the film; as his neighbors entertain themselves across the hall while opera music is blaring in the background, Frank does battle with a fierce Russian ogre that has been sent to eliminate him.

In standard fashion, "The Punisher" also doesn't forget to be a little humorous with its material (here, we get the standard one-liners like "God is gonna sit this one out!"), but those elements come off as rather downplayed in contrast with the rest of the film's material, which is stark, gritty, relentless and blunt in the way the director gives it to us. Having not been familiar with much of the story of "The Punisher" before seeing this adaptation (or, for that matter, the original Dolph Lundgren version of the story that has become a B-movie cult classic of sorts), I went into the theater not knowing what to expect, and emerged with an impression that I had not had with a film like this since the first installment in the "X-Men" franchise. Like that movie, this is not the kind of vehicle that is driven purely on the prospect of flashy images rushing off the screen. Instead, the introspective nature of the story is the primary virtue; it is thought-provoking, rousing, piercing and confident from beginning to end. To say that the film redeems this genre from recent semi-lapses like "Hellboy" is an understatement.