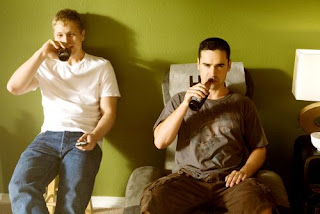 The beer-guzzling imbecile that hogs the spotlight of “I Hope They Serve Beer in Hell” is the most unpleasant 20-year old I have seen in a comedy in recent years, soulless and disparaging and so excessive in those qualities that they seem to have no beginning or ending point. A more skilled comedy would have been obligated to reduce him to background distraction after two minutes; unfortunately, based on new traditions, he is allowed to infect celluloid for the full running time and drives the story into rather dubious territory. Often we find ourselves sitting back in total speechlessness, particularly when he degrades women, speaks in vulgar and pompous analogies, indulges in irresponsible behavior, and allows himself to not be bothered by noticing any of the discomfort that he brings to the lives of his own close friends. That he achieves all of this with either a smirk or a chuckle in conjunction with a crude line of dialogue is a convenient narrative cop-out, one meant to imply that the mean-spiritedness of the material is really just tongue-in-cheek. Too bad it isn’t in the least bit funny.

I’m not being unfair in my approach here. A movie with a politically incorrect spirit is fully capable of being genuinely funny and engaging, and even some of the most mean-spirited comedies have found a way to warrant an actual laugh, even though we can feel bad for participating in one afterwards. But “I Hope They Serve Beer in Hell” does not know the first thing about comic timing. It is tone deaf, tasteless and irrational material that has all the misplaced arrogance of a rebellious high school drop-out who thinks he or she is too ahead of the game for people to understand. Sitting through it with rolling eyes, I routinely wondered if the writer, Tucker Max, genuinely feels the same about people as his own characters do – if he sees all women as either whores or sluts (apparently their chosen professions can classify them as one or the other in most cases), if he speaks to them as if to insinuate homicidal tendencies can be effective pick-up lines, and if he actually thinks gross bodily functions are really so funny and significant that they can cause characters to have powerful revelations afterwards. A quick internet search on him yielded some revealing results – he openly blogs about being an excessive drinker and womanizer, although I doubt the validity of it – but judging by the work before us, I couldn’t exactly say I would be very surprised by anything I might discover, either. Here is a movie very obviously written by someone who believes painful lapses in taste are the only chord worth striking in search of a good laugh.

Consider the plot. It involves three characters in college whose whole existence depends on the idea of getting drunk, getting laid and coming up with as many crude punch lines as possible to use as answers to questionable activity. Chief among them is Tucker Max (yes, the lead shares the same name with the film’s writer) (Matt Czuchry), who trots onto screen proud of the fact that he just had sex with a deaf woman the night before, and promises another night of fun and games with women when he decides to take his two closest buddies, Drew (Jesse Bradford) and Dan (Geoff Stults) out of town to a strip joint that allows guests to physically touch the naked employees. Dan is getting married to his girlfriend the next day and spends much of the trip frowning in discomfort at lying to his fiancée about his whereabouts, while Drew simply tugs along reminding everyone that, because his own girlfriend cheated on him, all girls are either whores or sluts and should be treated as such. Considering his dapper approach, can you blame her for her actions?

To say that I found these three men utterly devoid of any basic likeability is a grand understatement; they are not only foul, but also profoundly uninteresting. That’s because Mr. Max’s unfortunate screenplay lacks the basic skill to multi-task, and he is usually so concentrated on the rambling dialogue that he overlooks developing a pace and making basic behavior observations for his trio of sexists. His characters don’t even talk like actual characters in a comedy; they read long and exhausting lines of dialogue that seem insufferably wordy. There is a labored sequence early on that stresses this notion, in which the Drew character decides to defend himself against his friends on the virtues of eating a popular hybrid sandwich that is referred to as the “Pancakewich.” Here is his resulting monologue, verbatim:

“I can only assume by your cavalier attitude that you have yet to partake in the wonderment that is the Pancakewich. Allow me to enlighten you. What happens is the one true god grows Panecakewiches on trees in the Elitian fields using a mystical incantation, he then proceeds to magic them down to your local eatery where whatever societal reject Griddlworld has rescued off the dole that week gently wraps them in cellophane and passes them along to you, the fortunate consumer. You proceed to ingest this finery in the vain hope that your obviously overmatched taste buds can somehow comprehend the delectable intricacies that face them. Is that egg? Why yes, yes it is. And bacon too. But wait, did they...? They didn't. Yes, they did, they did indeed. They added cheese. And then, then my friend, they wrapped it in a sumptuous pancake bun. As your taste buds try to process that amazing piece of information, it hits them: the syrup nugget. The motherfucking syrup nugget. It announces itself with a burst of confectionery grandiosity the likes of which your pallet has never seen!”

For the sake of simplifying this argument, let’s ignore the fact that no one knows what a pancakewich actually is, and the movie never bothers to include one. Who talks like this in real life? What possible scenario could there ever be which would justify any of this dialogue being spoken in such a heavily verbose fashion? There is a compulsory distinction to the way we speak in the written word as opposed to how we convey ourselves in the spoken; furthermore, real comedy does not come from the implication of basic spoken lines sounding obviously rehearsed. “I Hope They Serve Beer in Hell” acts as if those lines simply do not apply. I wondered for a good five minutes if the actor, Jesse Bradford, might have spoken up during the filming of this sequence to voice an opinion on the dialogue’s questionable execution. Then again, if he had that foresight, maybe his career would have taken him into better directions than this one by now.

Eventually the script requires the three characters to change their ways in some form or another, but of course they only do so to speed up a resolution, so none of them seem to happen through legitimate growth or realization. Instead, what we are given is a rather unpleasant climax in which the Tucker character, liquored up to escape the fact that he alienated his friends, comes close to sleeping with a married woman and then dashes across a hotel lobby in his underwear as a seriously bad case of diarrhea decides to reveal itself before he can make it to the restroom. It is an infuriating scene that is painfully unfunny, and yet one so reflective of the way we feel about the movie as a whole. “I Hope They Serve Beer in Hell” pushes so many buttons that it leaves you feeling embarrassed for everyone involved. And for the record, if beer really were being served in hell, then someone forgot to open a few bottles for me while I sat through this rubbish.