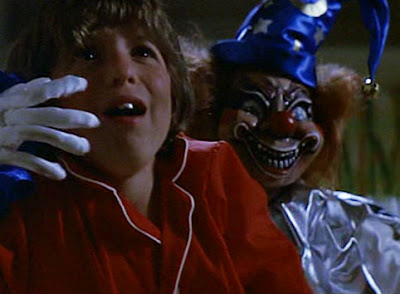 The ghost story was a fairly straightforward endeavor shackled by underlying menace in Hollywood’s golden days, but “Poltergeist” was perhaps one of the first movies to sensationalize it, to turn the idea in on itself and expose its more elaborate potential. Before it, few even knew the difference between poltergeists and hauntings, or if there was even a purpose to differentiate them; in a day when the cinema was about the growing presence of slasher films, the idea of a horror movie dealing in any part with the afterlife was superfluous. To our benefit, Steven Spielberg saw differently, and a crucial ingredient in achieving that realization may have come from his choice of Tobe Hopper as the director, whose own experience making “The Texas Chainsaw Massacre” gave him perhaps the right tools as a showman to cause the stage surrounding this straightforward premise to erupt with lavish fanfare. And yet the movie is more than just a story of strange ghostly phenomenon that is upstaged by special effects or grandiose plot twists; it portrays the material realistically, uses both mind and heart in the delivery, and is played by actors who seem to have a more genuine stake in the outcome than studio execs eager to plan sequels.


Many horror flicks of the 80s spent sufficient time seeking the right nuance for a new generation of teenage movie-goers who flocked to the cinema in search of scares. Many succeeded, only a few retained their integrity. And for every great venture like “Poltergeist” or “A Nightmare on Elm Street,” there was also a “Friday the 13th” or an “I Spit on Your Grave” – that is, films that were louder and more grotesque than normal, and endeavors that allowed themselves to lose sight of the narrative foundation in favor of endless (and often pointless) blood and gore. Craven found his forte in unique premises matched with fully realized villains with the first “Nightmare” picture, and Spielberg, perhaps on a creative high from nearing completion with his “E.T. – The Extra Terrestrial,” helped establish a tone in Hopper’s endeavor that allowed it to play with concepts and arrive at new and exciting conclusions. The result was solid, neatly packaged and well written, and even in an era where the ghost story has become overwrought with absurdities and moments of surprise that arrive conveniently with shrill soundtrack cues, the movie holds up surprisingly well.

But why shouldn’t it? Here is a story that seems to exist outside of a cultural time capsule. The themes endure, the narrative structure occupies a universal sense of urgency, and the characters fulfill basic fundamental traits of a realistic suburban family. The only attribute that dates it is the special effects, still nothing more than just a minor scrutiny. Dare it be said, “Poltergeist” could have been a film made for many generations with similar results, its only discardable offense being the same one that kept it from becoming a much bigger hit in the year of its release: the fact that moviegoers are often more interested in the instantly gratifying product playing down the hall, not necessarily the one made with the intention of lasting in the mind.

The story has great fun with the opportunities both mentally and visually. Young Carol Anne (Heather O'Rourke) is a plucky, cheerful, bright-eyed girl with long blond hair and a smile as infectious as her disposition, and in the opening scenes of the film, her sense of curiosity takes on a sense of the supernatural when family members find her enthusiastically sitting in front of the TV set downstairs while it is tuned to static. Right, except there’s more to the staring. She talks to it as if it is asking her questions. She smiles at the screen, and reaches out to touch it. There is a chill sent down the spines of viewers, this specific moment contrasted by a musical score that seems more cheery than it needs to be. Yet it lays the groundwork necessary to make the premise work; in order for us find the idea effective, we have to buy into the notion that the characters are, genuinely, innocent and unknowing with what is about to happen.

And much does happen in the course of two hours to this family, too. Once Carol Anne has set up a form of psychic contact with the “TV People,” strange things begin occurring throughout the house. Chairs begin to rearrange themselves in the dining room. Earthquakes occur that none of the neighbors ever seem to be able to feel. The twisting branches of a giant dead tree that rests just outside of the kids’ bedroom takes on ominous forms in the shadows. A clown toy about the size of a Cabbage Patch doll seems to stare at young Robbie (Oliver Robbins) as if plotting something devious. Often the odd occurrences are either dismissed or greeted with a raised eyebrow, but there comes a point when nothing can be easily ignored anymore. And in a crucial moment in which the plot reveals its true horror, young Carol Anne disappears in a swirling vortex of light inside her bedroom closet (you, and no doubt your parents, might refer to it as “the other side”).

The second act of the film spends just as much time investigating the strange phenomena as it does figuring out a way for the family to cross over to another dimension in order to retrieve their daughter, whose body may be missing but whose presence is still active in the house itself. A group of paranormal enthusiasts are brought in by the girl’s parents, Steven (Craig T. Nelson) and Diane (Jobeth Williams), to document the case and assist in finding answers. Those answers, alas, are not clear to Dr. Lesh (Beatrice Straight), who is familiar with many variations of the poltergeist presence, but has never witnessed something as involved and shocking as these events. I guess kidnappings from one dimension to the next are not common cases in any paranormal division.

Their research – and the revelations that transpire during it – force them to seek help from a clairvoyant named Tangina (Zelda Rubinstein), who walks cautiously through the house’s hallways and asks questions that, well, she already knows the answers to. With her insight, guidance, and delivery of a plausible explanation of what is really going on in the next dimension, she spearheads a strategy to retrieve Carol Anne and bring her home to her parents. The plan, needless to say, requires the parents have active participation in the rescue, and why shouldn’t it? Like most of Spielberg’s early films, the emotional weight of the resolution is validated by the participation of characters with an active stake in the conflict, and not just overseers that sit out on the sides. There is, perhaps, a certain restraint in this climax because it is essentially being dictated by an individual with psychic connections to the unknown “other side” rather than someone without the slightest clue, but that is to be expected. It is also fully justified, especially when the movie shows signs that it has no intention of ending there and goes for one more ambitious round of action and shocking plot twists.

The dual climax, admittedly, could derail new viewers. It feels like it has ulterior motives, few of them meant to accomplish anything other than to show off new special effect technology (and maybe serve as a platform for the studio to extend the franchise with sequels – which they did). But there are reasons the latter one needs to be there, too. For one, the movie feels unfinished if we just expect the family to rescue their daughter and then move on with their lives. What becomes of the source of the evil? Do we just expect them to disappear where they came from? Moreover, the movie would lack a substantial defense in the case to differentiate the poltergeist phenomenon from the haunted house one if it had cut down its last act. Any attempts to limit it would allow the wool over our eyes to throttle full vision, and nothing is more infuriating than a supernatural thriller that is blind to its own cause.

Yet somehow the movie manages to strike all the right chords, and it does so without sacrificing the reliability of the screenplay. Something is always happening in this house and to these characters, but it is always something that, in their world, makes narrative sense. Too often a ghost story will forget to keep viewers and characters on the same page because they are more interested in the impulsive moments rather than the overall ambiance. “Poltergeist” is a lot more dedicated to its cause than most viewers today are probably used to. It builds to something of value. That may not make it the most profound film of its genre by any stretch, but it does make it one of the most memorable. Otherwise some of us still wouldn’t be singing its praises almost three decades after the fact.