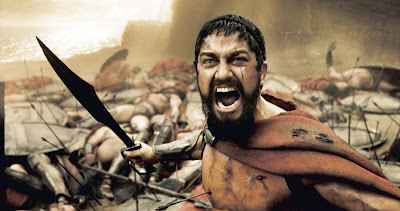 The hero at the center of “300” is defined as a man “baptized in the fire of combat,” which might explain the look of almost sadistic pleasure he occupies for two hours. The  prologue sets that idea in motion quite literally from the day of his birth, when a mystic holds his writhing infantile figure over a gulley containing the bones of countless discarded children while he conducts an examination for signs of physical flaw (the voice-over informs us that Spartan society tossed newborns into the pit if any were deemed “unsuitable”). Later, as he goes through a structured adolescence of demanding physical tests with dangerous wild animals and public fighting contests, that look of persevering torment seems harmonious with his hardened face – the same look, not coincidentally, that is also permanently etched on the profiles of elders who see the violent upbringing not as seeds for a traumatic adulthood, but rather as the curriculum for those destined to be fierce warriors. It’s a dangerous world out there, especially for a culture that seems content to do battle with swords and shields without breastplates to protect their exposed torsos.

The boy eventually becomes King Leonidas of the Spartans (Gerard Butler), and his rule will be challenged by the invasion of a massive army of Persians that is sweeping the countryside and wiping out entire populations in neighboring cities. Early on, a visiting emissary requests an audience with Leonidas and demands that his kingdom surrender to the ambitious Persian ruler Xerxes (Rodrigo Santoro), who would only show mercy to those that bow to his sweeping authority without resisting what is to come. That, of course, proves to be a fatal mistake on his part, and the arrogant visitors are tossed into a bottomless pit at the center of the city after being ambushed by riled Spartans. Their eager ruler picks up on that incensed energy quickly, and proposes a march against the enemy before the impending fight finds its way to their own doorsteps. The Spartan council, naturally, is unlikely to support the cause with reinforcements because of their opposition to outright war, but hey, if you’ve got 300 bare-chested men who look like roid-ramped gym regulars grinning at the idea of causing unexpected bloodshed, would you stand entirely in their way?

“300” plays around with what I gather is a piece of genuine Greek history: in 480 B.C., the famous Battle of Thermopylae involved a small resistance of city-states opposing the passage of Xerxes’ enormous army into the Greek countryside, and they were overwhelmed in a fearless last stand that has apparently encouraged a few loose literary interpretations – including the recent graphic novel by Frank Miller that inspired this movie, who observes the material less from historical underpinnings (the real battle featured significantly more than 300 opponents) and more from a platform of colorful showmanship. You can sense it just in the way the male characters are carried: all of them speak in self-aware sound bites (“the world will know that free men stood up to tyranny!”) and are scantily clad in garbs that match their brotherhood with an underlying eroticism; they would be more appropriate, perhaps, at a fetish ball rather than a battlefield. I suppose that’s inevitable in context with Miller’s audacious style, which demands certain detachment from the events in order to leave its imprint. Plus there’s no way you can play this material as straight history if you expect any audience to keep up with you, and whereas records suggests all the men involved in the Greek resistance eventually failed against the invasion, the movie is generous enough to allow one warrior to flee the ambush so that he can relay his story to future generations of Spartans who will be inspired by the audacious antics of their ancestors. Good call for the books, really.

Somehow this actually inspires a rousing good time, and our instinctual desire to sneer at the implausibility of the story is stalled by a sense of ambition that seems unmatched even by the standards of the Hollywood assembly line. Director Zack Snyder brilliantly recreates the look of Miller’s source material down to specific frames, such as a notable shot in which Spartans shove a small band of Persians over the side of a cliff while the light of a horizon reduces them to silhouettes, and another when Leonidas looks up at thousands of arrows in the sky casting a distinct shadow down on he and his bruised warriors. Much like the brilliant “Sin City” (also a Miller graphic novel), the movie is not content to just show us the events in conventional means; the visual effects have distinct cartoonish qualities that are sleekly edited together in a stop/start motion technique, and the picture is washed out in sepia tones to highlight the grungy atmosphere of the era. Snyder also has made some excellent casting choices – notably Gerard Butler as the angry king Leonidas, whose own face occupies the same weathered quality of an ancient leader (not to mention the strong noble profile; it looks like it belongs on a Greek coin).

The obvious parallel running through both of Miller’s graphic novels is simple: men are conduits for a violent quality that manifests in habitats where it is essential to their survival. But the noir-ish shadows of “Sin City” achieve transcendence because the characters and conflicts were equally well-drawn, and the movie adaptation realized them to an immense capacity. “300,” on the other hand, isn’t nearly as far-sighted; it is more or less about the choreography associated with war rather than the mentality, and it lacks the hunger to go beyond the trajectory of a Hollywood action picture. That might have even been more forgivable if the visuals were meant to accentuate an ironic statement about the Spartans or their insatiable drive, but alas they are simply a mask to keep us amused in a story that, really, comes off as standard stuff. That doesn’t negate the potency of the visuals, but wouldn’t they have been more enriched by a plot that matched them?

There is at least an enthusiasm in the screenplay to sell the material, and the presence of an eager narrator provides colorful analogies to guide us through a series of standard plot points. Most storytellers doing voice-overs generally describe their yarns as outsiders looking in from outlying podiums, but here they are relayed by one who had such direct involvement in them that he nearly finds ecstasy in the details, as if romanticizing the idea of his comrades overtaken by the bloody fist of combat. Perhaps you can’t blame him; when men are collectively the byproduct of physical hostility, tact isn’t usually the first thing one’s mind. Yet it also creates a bewildering uncertainty in how the audience is expected to respond to the material: should we accept it all in a serious light, or must it be perceived as a mocking metaphor on the misplaced arrogance of men? Or does is simply defy subtext? For a movie in which an overwhelming sense of panache puts a rift in us understanding the intention, you can’t help but feel this is all a little short-sighted.


Action/War (US); 2007; Rated R for graphic battle sequences throughout, some sexuality and nudity; Running Time: 119 Minutes

"Our instinctual desire to sneer at the implausibility of the story"... this movie is based on a story that actually happened..