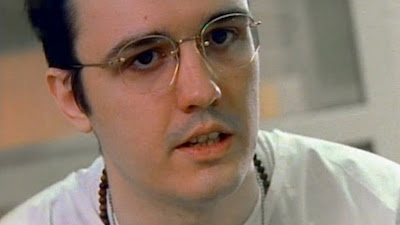 The unanswered questions at the end of “Paradise Lost” were the kind that could inspire not only a need for a follow-up documentary, but indeed an entire political movement. In “Paradise Lost 2,” three teenage boys who were tried and convicted in 1994 of a grizzly series of child murders in Arkansas are nearly five years into their prison sentences, and occupy camera frames like mere shells brow-beaten by a due process that failed them. The perplexity of their convictions was instrumental in the creation of a non-profit support organization that is centralized in the second documentary, in which supporters of the “West Memphis Three” take on operative roles in an appeal process that would overturn the conviction of Damien Echols before a proposed death sentence is carried out. Anyone who saw the predecessor with an open mind can easily see why: in a legal climate that was beginning to use DNA and forensics as keys to unlocking the secrets of heinous crimes, how was it even possible that three relatively calm teenagers could be found guilty of murders that they could not be linked to scientifically?

The first film argued that the overreaching influence of religious faith in the south circumvented the logistics of the case. In an audacious move, filmmakers Joe Berlinger and Bruce Sinofsky exposed the details of the events down to the darkest of details (the movie opened with shots of the crime scene at the moment of its discovery), and subsequently followed every person involved in the events around for an entire year until guilty verdicts were handed down. The teenage boys arrested based on a seemingly coerced confession sat in dismay over their plight, and maintained innocence the entire time. The families of the accused refused to believe their loved ones were capable of such brutal instincts, and stood by their sides even when the community was spitting on them. The parents of the victims found comfort in the dismissal of the deaths as an act of satanic worship, and used it as a blinder to avoid seeing the holes in the evidence. And the legal teams in the cases engaged in a tug-of-war of cheap shots and manipulative double-speak that seemed more like brutal satire than authentic court proceedings. If they had been characters in a Dick Wolf series, they would have been written off in two episodes.

Little has changed for those in West Memphis who have recovered enough to participate in a second documentary, but there are added voices from all over the country that offer dissent. Two individuals who saw the first movie and researched the cases were inspired so greatly by the apparent injustice that they co-founded the “Free the West Memphis Three” alliance, which sought exoneration for the trio. Their presence is met with great annoyance from West Memphis citizens and legal authorities, who were present for those convictions and find the notion of doubt in their guilt to be insulting to the memory of the dead. The now-retired police chief Gary Gitchell – who spearheaded the state’s case against the three suspects – dismisses public outcry as something concocted based on a “slanted” interpretation of the events in the first movie, and notorious holy roller John Mark Byers, the stepfather of one of the murdered children (who often exploded in long fiery diatribes), now seems subconsciously aroused here by camera-mugging.

Meanwhile, a forensic expert hired on by a new defense team seeking supreme court appeals analyzes evidence on the remains and finds critical material not used in the original trial. Photographs reveal what appear to be bite marks above the left eye of one of the boys – something that could in effect clear the three convicted of all responsibility with the right dental records. His observations on the supposed crime scene also cement notions barely glossed over in the original trials: no blood means there must have been an alternate site for the murders to occur, and the trajectory of certain wounds (like the mutilation of the genitals on one victim) defy the theories established by the prosecution that castration could happen in the dark and in the water with that level of detail. Our initial desire to shout in frustration over the implausibility of these scenarios is echoed in the presence of countless supporters who rally around the three accused, and as they fearlessly wait for these new details to inspire a judge to hear the cases again, a mounting national doubt in the convictions stretches into Hollywood and television (notable supporters: Metallica and Johnny Depp). Yet the three at the center have little time with the cameras in this outing; only Echols, who is literally fighting for his right to live, is seen in any substantial capacity, and only long enough to exhibit all the classic signs of weariness and pathos. Perhaps that’s a given, though, when one is left so powerless.

An earlier sub-defense that had brief exposure during the 1994 murder trials is more fully realized this time around, perhaps to stress the idea that improbable situations can inspire equally unlikely rebuttals. During the investigations in 1993, Byers gave a hunting knife to the filmmakers as a gift; after they discovered a trace of human tissue and blood on the blade, it was submitted to the local police department and then brought up by the defense at trial, who in turn put Byers on the stand and cross-examined him as if to suggest he played a part in the murders. Byers was fairly nonchalant about the implication, but after his wife mysteriously died in the spring of 1996 (the autopsy listed it as an “undetermined” cause of death), those early accusations take on a new importance. Could he really have been the killer? Details emerge not only of countless run-ins with the law over drug possession and theft, but also of child abuse. Did he also hit his son with a belt that left behind buckle imprints in his face? And did he spank a neighbor’s child without permission, thus causing the family to take out a restraining order on him? All of these details come to a head in a scene when John takes a lie detector test and fumbles the words in describing the death of his wife, referring to it as a “murder” and not catching it in time to recant.

The movie world of fictionalized drama requires setups like this to usually result in some level of closure for the unfairly persecuted, but alas this is hardcore reality, and there is no path to success ahead of the West Memphis three in this instance. The courts deny Echols’ appeal, closing many of the legal windows that were left open to him and inching him closer to capital punishment. The inquiry into Byers’ link to the crimes proves to be a dead-end, allowing him to engage the camera in more scenes of fire and brimstone. The supporters of the three are disheartened, but not without hope; we suspect in the end that their endeavors to find justice in these legal nightmares will endure as long as the three draw breath behind bars, and after seeing and hearing all about these cases directly from the mouths of those involved, it becomes a necessity. Protest, after all, usually occurs when someone rejects logic for the sake of emotional conviction, and when a rural town in Arkansas condemns three men over hunches instead of hard proof, all bets are off.