Lessons from Criterion:
"Cries and Whispers" by Ingmar Bergman 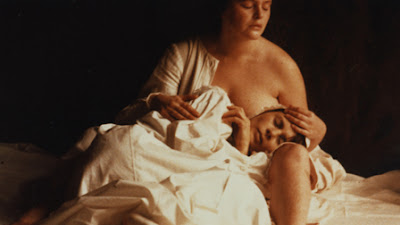 Three sisters, each separated by different stages of emotional weathering, inhabit a countryside manor like rats quietly feasting on each other’s insecurities. One of them is terminally ill and on the razor’s edge of mortality; the other two have arrived from afar to offer care in her dark and painful final days. One looks askance at emotional displays like a strange and horrifying concept; the other, whose piercing blue eyes overflow with vague desires, shrinks to obscurity in the face of truth. Their lives are framed by the presence of a sole but knowing housekeeper, a frumpy woman whose own loss of a young child has left her broken but nurturing. In an important scene, she comes to the call of the dying woman, opens her shirt and allows her to rest her head on her warm bosom for physical comfort. Their stories intertwine in a narrative soaked in muted desperation, and the deep red interiors of their home act as an organism of imprisonment. What cauterizes their souls and robs them of empathy? And when the darkest of moments come to pass, will they oppose the barriers holding them away from the embrace of familial instinct, or become enveloped in their own shame?

The underlying feeling in an Ingmar Bergman film is one of the most powerful forces buried within movies, but to see it in his “Cries and Whispers” is to sense its frailty in the hands of characters that scorn any potential for relief. It is to the director what “King Lear” was to Shakespeare: the most tragic and mocking of human dramas, knee-deep in a melancholy that plays on the fears of its hosts for ironic statements, and then wraps them in a cloak of striking visual beauty that interns their emotional scars. Little is said or explained when it comes to the source of their mental misfortune, but the movie sees right past mere faces in order to expose the “interior of the soul.” Some have called it the most painful movie he ever made, and it is easy to see why: the three sisters at the center have lost the wisdom of compassion and replaced it with unending pathos.

What aroused the shift in values? Something, we sense, must have snapped in Bergman’s psyche to encourage this kind of cynical implosion. Already established as one of the great cinematic poets of his generation, his movies had up to that point usually been skillful fusions of dread and innocence, even in circumstances when the material was fearsome. That’s because for every deep intellectual that pondered their fate in the universe, a comical parallel was typically close behind (a state of mind involving some sort of uplift was required of good filmmakers, he believed). The social tone of the movies quickly rose to pessimism in the face of bleak world affairs for many important directors by the late 60s, but Ingmar’s descent was distinctly more fervent. Did this correlate to a more agnostic outlook which began weaving its way into his movies starting with “Persona” seven years earlier? One will never know for sure, but the movies that remain continue to inspire speculation.

Here is one that plays not as straight narrative, but as a collection of sequences featuring culminating emotional events. A brief synopsis of them: Agnes (Harriet Andersson) is in the final days of her life as a result of terminal cancer, and her two sisters Maria (Liv Ullmann) and Karin (Ingrid Thulin) keep watch over her bedside, usually by taking turns sleeping in the neighboring room. They offer presence but don’t venture very close, even when Agnes is writhing in pain. The servant, Anna (Kari Sylwan), drifts into rooms impulsively and remains silent, but is usually the first on scene to comfort the dying woman: because she has been a faithful friend and nurse to Agnes for so long, a wordless bond exists between them that goes beyond the understanding of the sisters. The idea isn’t so mystifying in early scenes – in movies like these, the help usually knows about strained family relationships better than family members themselves – but later, once the fog lifts, indications of traumatic conflict begin to paint a clearer portrait of their histories. Bonds here exist only in blood, not compassion, and through countless sequences they seem to silently detest the idea of occupying each other’s space, even though it’s part of proper class etiquette.

Sisters with conflicted relationships are often at the root of classic movie drama, but seldom are their antics seen in such quiet or visually evocative tones. Berman was, up to that point, adamant against the use of color in his movies – perhaps correctly, he felt the dreaminess of black and white was more powerful – but he eventually conceded to it only on the principal that it would be used to represent certain cerebral proclivities. “Ever since childhood, I have imagined the soul to be a damp membrane in varying shades of red,” he once admitted. To match that sentiment, his production designer Marik Vos-Lundh took the interiors of a Swedish mansion and dressed them in piercing shades of deep red (everything from the walls to the drapes and furniture). As a contrast, the characters are usually seen clothed in monochromatic shades, which essentially play like mood rings (white when things are lighthearted, black following Agnes’ pain and eventual death, and so on). The stark distinction of the human figures against the “membrane” of the manor interiors creates an effect of unnatural fluidity: the characters don’t really walk through rooms but rather glide like silent lights and shadows, otherwise we might not even notice they are there.

Each woman’s internal complexion is explored in narrative vignettes that are staged with haunting introductions; first we hear whispers in the background, then we see their face (usually half-shaded) staring directly at the camera, and then the screen fades entirely to red (rather than black) before transporting us to key moments of the past. Maria’s central memory involves the arrival of a town doctor who comes to check up on Anna’s ailing young daughter, and transitions when she invites him to a private dinner and then attempts to seduce him with kind words and desiring eyes; later, when her husband learns of her affair, he stabs himself and is offered no aid – because she seems content to let him die or suffer. Karin, also married, is even more disconnected: her disapproving gazes are indicative of someone who is bitter and angry (“life is but a tissue of lies”), and alone in her dressing room she harms herself in what is the movie’s most shocking and paralyzing sequence.

What possible trauma could cause such jarring psychological fragmenting? The movie does not have the actual answer, but any answer would skip around the point; “Cries and Whispers” is solely about the heartbreak and desperation captured within a loose connection shared by three siblings, all of whom don’t really know or care about one another but are trapped by an upbringing that requires them to be nearby in a moment of mortality. Agnes’ impending death serves as the latest in what we sense is a series of emotional bandages meant to hide the truth from one another, but what will hold it together once she is gone? Following the final stages of her suffering, there are brief confessions and even halfhearted attempts at comfort, many of which are circumvented by fear of showing vulnerability. Only the dependable housekeeper Anna has any warmth left in her; despite a loss probably more immense than any can imagine, she remains quiet, obedient and yet immensely nurturing, and Agnes retains lucidity in great moments of suffering long enough to offer words of gratitude to her loving servant.

There is a critical sequence later in the film that continues to leave many viewers stupefied, mostly based on the notion that is (at first) unclear that we may or may not be seeing a dream rather than a tangible moment. That goes with the territory in any of Bergman’s films, however. Consider the famous shot of “The Seventh Seal” in which Antonius engages in a chess game with a grim figure that only he can see, or one in “Wild Strawberries” when the aged professor wanders through an empty town but realizes he casts no shadow. For any of the director’s movies to work, audiences must accept many of them as mere hallucinations. It is vital here for one primary reason: the dream world is a space when the true nature of characters is revealed, and in order for us to fully comprehend these women we must perhaps observe them in a confrontation of impossible means. A certain level of clarity is achieved in this one sequence that is at the center of Bergman’s painful thesis: it is, indeed, possible to be at the end of one’s life and discover that those who should be devoted to you until the last breath are only in it for mechanical reasons.

Many film students will study Ingmar Bergman for generations, and most will usually lump themselves in a sect that favors either his early years of intense metaphors or a later career of literal character studies. Inevitably, though, all of them will find unique meaning in “Cries and Whispers,” which arrives at the absolute center of his own wind-swept soul and discovers a piece of the human psyche that sits outside of traditional consciousness. Few movies paralyze us with such haunting questions, and even fewer will demand that they remain unanswered for the sake of an uncertain reflection. The irony is that Bergman struggled with those answers too, but his approach here suggests he got close enough to the membrane to recognize what was on the other side of it. 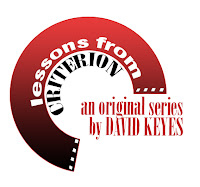 "Cries and Whispers" is the seventh article in this series.