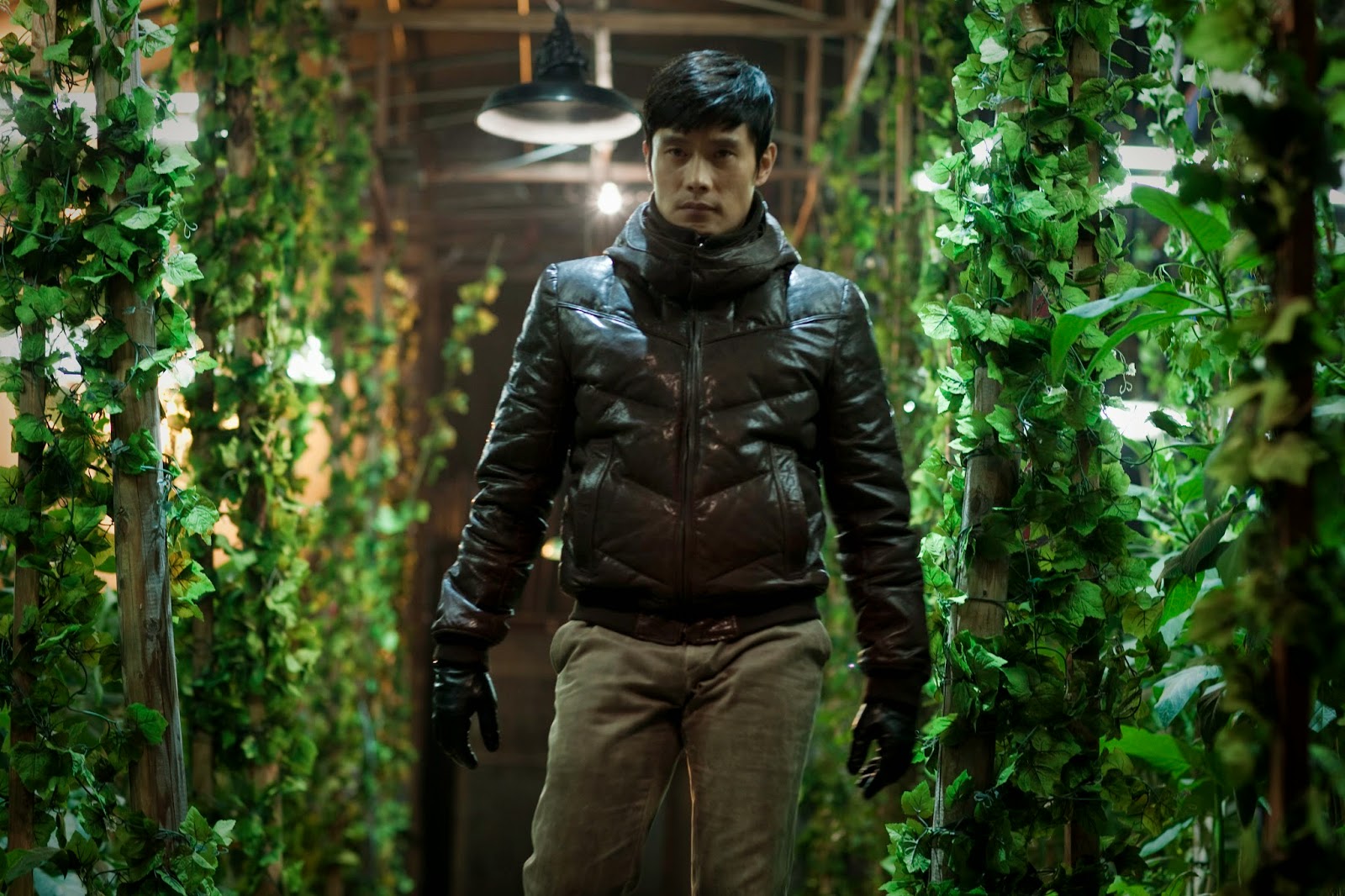 A lone shot of a car tugging through a blanket of snow in the first moments contradicts the impending menace, but its motive is transparent: everything that is about to happen is going to occur in a world that is familiar. Inside that car is a lovely woman named Joo-yeon (San-ha Oh). It is her birthday. She shares a pleasant phone conversation with her fiancée Kim (Lee Byung-hu), but their happiness is smeared by an impending sense of uncertainty: her car has stalled in a snow drift, and a mysterious man has come to offer his assistance. Kim overhears the predicament and suggests she dismiss him to wait for the tow truck, but the call does not last long enough to include him in the outcome. Over the low rumble of an ominous chord in the soundtrack, the figure burrows violently into her car, and knocks her unconscious with a hammer. Inevitably, the next scene features her coming to in a sedated manner long enough to plead for her life – heart-wrenchingly so, because she is pregnant, we discover.

That she is brutally murdered, cut up like a slice of cattle and discovered in pieces by a highway goes to fuel the drive of her romantic interest, a Korean secret government agent who vows painful revenge in between mourning sessions. In most movies this sort of arc would fuel a journey of intrigue through gradual stretches – the benchmark of revenge stories as far back as spaghetti westerns, really – but Jee-Woon has more dubious intentions. After being supplied with files on four possible suspects of his girl’s brutal murder, he goes on the hunt… and finds the culprit quite rapidly, engaged in yet another sadistic ritual of rape and violence against another female victim. Kim disrupts his antics long enough to beat him into submission, and yet does not kill him outright. Why? Because he is turning his resentment and anger into a lengthy game of predator-vs.-prey, where he intends to show up, injure him (usually while saving a potential victim), make him suffer and then let him off the lure long enough to contemplate his impending tragedy in fearful outbursts.

Because “I Saw the Devil” takes the approach of being a sadistic voyeur in this game, it exposes its audience to a full arsenal of disturbing suggestions, sometimes in very visual ways. That also means we spend a great deal of time with the killer himself, too: a cruel and unapologetic predator against women named Jan Kyung-chul (Choi Min-sik), who takes the ambushes of his vengeful antagonizer not as threats against safety but as impulses of competition. This is a monster who not only loves what he does, but replaces his physical pain with more monstrous thoughts: namely, how he can get even with a man who always seems to be one step of his methods, and appears to have nothing to lose. Though it is not necessarily the film’s intention to consider that thought process in the same way that “The Silence of the Lambs” or “Zodiac” do, the screenplay by Park Hoon-Jung benefits from a dual layer of insight. Jang occupies the screen frequently and viciously, but not just as an object of anarchy; it’s as if the camera finds almost tragic magnetism in his antics, unable to pull away because it suspects something deeper yet to be revealed.

Many of the more notable serial killers in movies have that quality. Hannibal Lecter remains that sort of benchmark in modern thrillers. Jon Doe in “Seven” added deeper severity to that thought process. Jang Kyung-chul is so fully immersed in his murderous rampage that what exists on screen is not entirely human, at least any longer. The performance by Choi Min-sik is so on target with that sensibility that there is never a moment when we don’t sulk in some level of emotional paralysis during his screen time, even as he is tortured or ambushed by his would-be captor. We fear for the women who cross his path because we know just how deep his depravity will run if he is allowed to capitalize on it. And when he steps into a subplot that requires him to engage with a peer who kills his victims to feast on their meat, his nonchalant demeanor is simply another facet of passiveness that goes to emphasize his deadened nature. Was he never human at all, or has a series of experiences conditioned him in such a way that he no longer accepts others as anything more than vessels of disposable flesh?

One wonders how a movie this gory can establish any opportunity for the audience to ask such questions. At 141 minutes, here is an endeavor that contains (among other things) scenes of dismemberment, torture, cruel taunting, rape, cannibalism, brutal beatings, and even a scene in which the killer’s Achilles tendon is severed with what looks like a screwdriver. Without much relief, there is no literal moment when we should be able to pause from this mayhem to contemplate the psychology of the actions. And yet we do, abundantly. Why? Because the film is a triumph of perceptive (if deliberate) writing, of characters that stare into their situations with believable trauma, and of technical skill that steps beyond the values of the more underground sensibilities of such films. Neither the writer or the director are messing around here with any level of insincerity, and despite our nagging urge to turn away in disgust at the antics of its perpetrators, they urge us on with steadfast dedication, as if doggedly hoping to find a moral that might justify the excursion. Whether they find it at all may be arguable to some viewers, but it struck a mental chord with me that I could not ignore.

Few of the details will make logical sense. The viewer who is unable to leave behind notions of physics or rationale will notice quite quickly how improbable many of the plot’s scenarios seem, even in context with the bloody nature of its villain’s antics. But “I Saw the Devil” is not a movie that exists purely to fascinate us with specifics. It is about tone, about mood, and about the cause and effect of extreme behaviors. The fact that it exists proudly in that notorious sub-genre of “torture porn” is a label it wears firmly, but not proudly. Deadpan torture offers nothing in regards to emotional considerations. Our disgust of Jung’s endless spree of death and destruction is, in fact, matched by the morose realization that Kim, a good-natured sort, overpowers his own sense of sanity in order to meet his wife’s murderer on the same level. To what cause? To get even? To prevent the deaths of others while simultaneously avenging someone else’s? Revenge is just as destructive as the deeds that inspired it, but is often celebrated for the sake of gratification in a medium that requires characters to reach closure after two hours. This is one of those unsmiling films that finds shame in sensationalizing the act, and suspects that a great deal of torment will follow all those who remain standing after the credits roll.