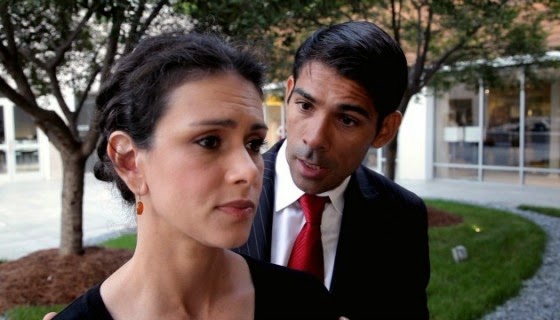 Some say asking such questions violates the principal of the kinds of comedies too, but to have them at all, especially now, is indicative of something more alluring. “Undocumented Executive,” a small but charming film from Brian Kosisky, stimulates such thoughts because despite the forced predicament – and against all impressions that we are dealing with an absurd idea – there is a certain sophistication to the characters, many of whom recognize their predicaments but wear them enthusiastically in the presence of an audience that would ordinarily dismiss them as victims of screwball intentions. Somehow, they not only hold their own, but even manage to evolve into the sorts of people we enjoy being around. And when you consider that their plight routinely provides them ammunition in conveying a few biting funny punchlines as well, it certainly sweetens the deal.

The film opens with a very casual setup: Jesus, a colorful motor-mouth with obligatory language barriers, steps into the U.S. for a shot at the American dream, and finds it when his sister lands him a job interview for painting offices. He is played by Tony Guerrero with matter-of-fact precision, and intercuts his verbal outbursts with a gaze that appears worrisome. That combination works well to suggest his impending fortune; when he shows up dressed in business attire to the interview, the secretary points him in the opposite direction, where a group of applicants await an audience with two businessmen hiring for something more prestigious: a position at the head of accounting at a tech firm.

Immediately the questions race through the minds of observant viewers. How does anyone mistake a prospective day laborer for an accountant, especially as the inevitable interview gets underway? The movie suggests shady intentions on part of those seated on the opposite side of the desk. Ken (Clayton Landey) and Dennis (Mark Oliver) are not actually all that concerned with credentials or experience; instead, they are simply looking for a disposable figurehead to place at the top of a very shrewd business scheme that has them skimming money off the top of the pile to pad their pockets. Their agenda is, alas, sniffed out early on by an accountant named Anita (Melissa Ponzio), who actually wants the position and believes she didn’t get it because, well, her bosses are probably up to something. When she realizes early on that Jesus is an illegal immigrant with no accounting experience, the instinct to correct the mistaken job offer is subverted by the obligatory scene where her confession is viewed as an ulterior motive from a scorned employee, ultimately inspiring her to keep his identity under wraps so that she can use him to spy on her bosses.

A plethora of setups dot the narrative like invitations to awkward situations, and the characters dance through them with the kind of spirit and energy that you would find more at home in more formulaic ideas. A less motivated filmmaker would have downplayed all of that for the sake of emphasizing all the traditional story conflicts, but Kosisky seems to know the limits of his foundation, and builds a few good platforms for his actors to spring from. Consider an early scene when Jesus’ sister, equally outspoken, is pulled over by a police officer for running a stop sign, and is brought to the epitome of anxiety over the fact that the officer may, in fact, discover that her brother is in the country illegally. Most writers of good comedy don’t hone in on the scenario, but simply create a moment for faces to react in; for Anita, her discomfort is magnified by the unending diatribes of a nervous brother, who is told to keep silent and yet doesn’t quite grasp the context of the confrontation. Later, that approach is used again to frame a critical scene when Anita is asked to enter the office in order to collect critical papers that have not yet been shredded, and she comes face-to-face with one of the men who would happily destroy her if he knew what she was there for.

All of this could have been handled with precision and conceit, but it is because “Undocumented Executive” exercises restraint in beating down situations that we are less focused on tired clichés and more amused by the impulses of the actors. Everyone involved knows they are participating in a drowsy idea of a story, and yet refuse to play it through with straight intentions. Some of the dialogue is, admittedly, is a little too labored to feel like genuine conversation, and the two scheming accountant executives are not all that convincing (even in comedy, there are few things worse than uncharismatic villains). But what does that all matter in the long run? It is rare for comedies (even obscure ones) to inspire this much delight without resorting to vulgarity or cartoonish execution, especially in the framework of a routine setup.