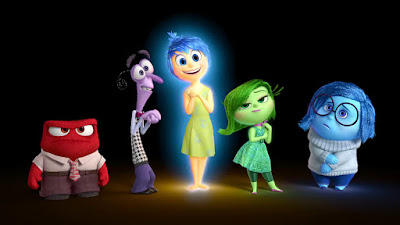 Inside the mind of every teenage girl is a plethora of conflicting emotions struggling to find a meaningful balance. This is the narrative according to “Inside Out,” the newest Pixar film, which takes that dependable sense of adventure of animators, quite literally, into the head of one such young girl who is learning to deal with the tribulations of growing up. She has more than her fair share of reasons to doubt her own stability, too; a rather joyous sort who was perfectly happy in her Minnesotan hometown, she finds herself thrust into the realities of cross-country relocation to San Francisco, learning how to function in a new school (without friends), and living in a house where the narrow walls seem to create their own sense of anxiety. To suggest she feels like a stranger in her own life only scrapes the surface of the realization; her eventual detachment informs her perspective so thoroughly that her joyous demeanor quickly falls under the weight of conflicting feelings, all of them extreme. Many kids inevitably must walk the long mile of change when it comes to a family moving away from a sense of security, and yet how can poor confused Riley possibly rediscover her lost optimism, especially when everything she has ever known has been replaced by things so frighteningly foreign?

The specifics of these internal struggles are not a matter of mere brain chemistry, but apparently of little tiny personalities that walk within a social infrastructure that exists within our very heads. At the controls are five specific identities that inform our entire emotional system, each so named and designed based on their primary functions: Joy (the unspoken leader), Sadness, Disgust, Fear and Anger. They are a team that does not always agree on what impulses are best used to respond to everyday situations, but this much is certain: each of them is there to help their host grow up into a positive and thoughtful adult, and they nurture her well-being in a manner that necessitates each of their presences through a host of memories. Their pecking order, furthermore, is indicative of just what kind of world they will come to live in. A personality where anger is the predominant emotion, for example, may be dark and destructive; one revolved around sadness may be gloomy and pessimistic. The fact that Riley’s existence is mostly one of happiness insists that the world of her emotions will be one of hope and desire, and it will be made all the more exciting by the fact that they will all be asked to deal with situations beyond their understanding.

While emotions themselves inform the spine of Riley’s identity, the world is also so much more than that. The headquarters of this brain function sits at the edge of a gaping chasm, and its interiors resemble the flight deck of a movie spaceship. A large screen just beyond the control panel shows the images that Riley is currently experiencing. Each time a memory is made, a glass orb that houses it comes rolling off of a nearby assembly line (yellow orbs are happy memories, blue are sad ones, and so on). Behind all that is a cylindrical unit that houses a cluster of “core memories,” which are the fuel for a person’s true nature. The movie visualizes this reality by having those core memories power personality “islands,” which appear as giant mechanical constructs that look like attractions at a theme park. They sit off at a distance from the high windows of the mainframe, but the five emotions always know what facet of the personality is working: the island comes to life in a dazzling array of motion. And if that isn’t enough detail to inspire fascination, then think about how the film comes to visualize imaginary friends, or “trains of thought.”

One could almost go on for hours in describing the depth of specifics that “Inside Out” propels onto the screen, but that would be undercutting the point of the story, wouldn’t it? The Pixar brand ceases to create exciting new movie worlds year after year (some of the best, one could argue, approach the classification of high art), but the transcending quality of a movie like this is in how it marries that ambition to a screenplay with meaningful goals and exciting in-jokes. It all begins with one simple realization: the younger the mind, the purer the feeling. We watch on with enthusiasm as young Riley is shown in early youth passing through a plethora of experiences that shape her emotional well-being and personality: conventional joys as a toddler in a loving house, happy times with parents who are goofy and attentive, joyous occasions on a hockey court, and daydreams that include a healthy supply of imaginative quirks (her imaginary friend, a pink hybrid of zoo animals named Bing Bong, supplies the movie with a zany sense of comic timing).

All while these events are transpiring, there are the five figures of her emotional nature, standing idly at the controls and watching over her in hopes of gearing her reactions into something healthy and safe. Through those character-building exercises, each of the five also seem to take on their own sense of identity; though they are figures programming Riley’s emotions, they have opinions, quirks, flaws and observations that make them so much more. One day, however, their balance is offset tremendously when Riley’s family moves to California for her dad’s new job, and the inner-workings of her mental utopia are jarred into sudden anarchy. Important memories become tainted by the touch of Sadness. Others get lost in the shuffle. Joy, so optimistic and dominant, loses control of Riley’s perceptions and watches on as the struggle between her colleagues causes distinct personality shifts (sometimes resulting in the collapse of her important personality islands). And then, in a struggle between Sadness and Joy in which core memories are inadvertently messed with, both emotions wind up getting lost beyond the safety of headquarters. A pursuit to return gets underway, inevitably, because of the dangers of leaving Fear, Anger and Disgust in charge; when three such emotions control all responses of one person’s mind, you don’t have to imagine hard to decipher what that person is likely to turn into.

Two journeys are underway throughout the course of “Inside Out,” and at equal parts they are ambitious, colorful, intricate, thoughtful, intriguing, sad and, yes, even relatable. While children will relate instantly to the experiences of Riley’s current situation and find a commonality with all of her individual quirks, adults will be marveled at how perceptive the movie is when it comes to understanding human psychology. These details are not merely invented out of thin air – they are deeply connected to an underlying thought process that makes sense, in some bizarre way. And the fact that the movie imagines these possibilities in very wondrous sights (such as a memory bank that looks like a bunch of towering library shelves) goes to emphasize the continued inspiration of movie animators. That may be an easy thing to say considering how frequent cartoons arrive in movie theaters, but so few of the modern era are artful about their subjects, either. The adventures that go on in Riley’s head are so fully realized that they rival the coral reef in “Finding Nemo,” the world of insects in “A Bug’s Life” and even the hectic French kitchen in “Ratatouille.” These are not backdrops in an animated film; these are snapshots into worlds that seem fully possible.

While most of the Pixar films are entertaining yarns that engage our sense of wonder in such places, however, a select few of them also transcend that nature and offer the dual functionality of deeper subtexts. The masterpiece “Wall-E,” for instance, also becomes a heartfelt statement against the danger of consumerism. “The Incredibles,” one of the more sarcastic movies of the lineup, is amazing in the way it satirizes the absurd nature of celebrity, all while implicating family dysfunction as one of the great sources of comedy. And aside from being funny and ambitious, the terrific “Up” also calls to mind the limits we put on ourselves, especially as we grow into the maddening routine of old age. “Inside Out” joins this elite group of great films because it does so much more than just have fun with its concept: it thinks, feels, empathizes and shares in the joy of human identity, and does so in one of the most uniquely inspired ways we have ever seen. So often in our lives we respond to our experiences with emotions that are counter-intuitive to the meaning of happiness; in other intervals, the mere façade of joy can mask more unresolved issues, because the health of a positive feeling is often enriched by the healing of an old wound. And in many cases, a daily routine of conflicting sentiments can simply bewilder us to the point of misunderstanding and insecurity. This is a movie that simplifies those frustrating complexities and gives them meaning. It isn’t just a wonderful family entertainment, but a warm and creative embrace of the quirks that make us who we are day after day.